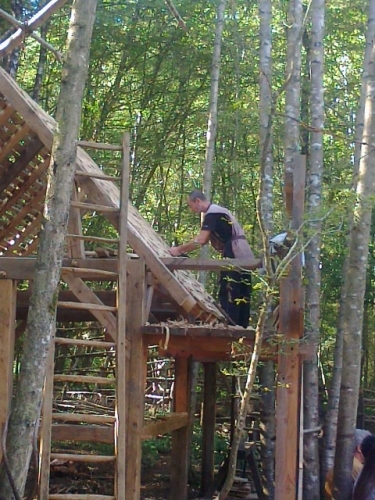 Charity Cottage did everyone proud in September. Stuart from Canada and girlfriend Alice from Yorkshire would ordinarily have stayed in the main house, but on their proposed arrival date I was having cataract surgery in the Polyclinique. I had no idea how I would be feeling after the operation, so I cooked and froze several days’ grub the day before, and we agreed they would sleep in the cottage and eat with us.Well, I was firing on all cylinders within a few hours of the operation (thank you, Doctor Ghrer) and a riotous time was had by all. I was prescribed an elaborate régime of eye drops – four different kinds, each in its dinky little disposable phial – which I administered myself. We enjoyed a day at Guédelon together, accompanied by my Drop Box. We have been visiting Guédelon, where a mediaeval château fort is in course of construction using authentic materials and methods, since we arrived in France. It is always fascinating to see the progress since our last visit. Read all about it on http://www.guedelon.fr/en/

Although they were our guests, Alice and Stuart insisted on donating to Combat Stress, and a generous cheque complete with Gift Aid form to claim a present from the taxman is in the post.

In August 1949, aged 6, I was taken to a flea circus. We clustered around a small table in a tiny tent. The fleas walked the tightrope, leapt through hoops and pulled carts. I wondered how many died while the circus owner was learning to apply their minuscule harnesses. From the numerous red pinpricks on her arms it seemed that the artistes who survived were well nourished. There are few flea circuses nowadays. A website will tell you all about flea circuses. 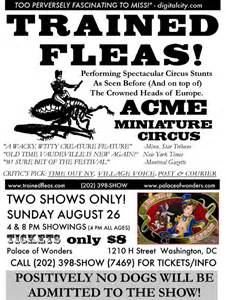 In August 2016, aged 73, I received a call from Gary, the agent who manages our house in Suffolk. The tenants had vacated the property in July. After a thorough inspection their deposit was refunded in full and we all wished them well. However, our agent was showing a workman around when they were (his words) ‘bitten to death’ by fleas. The entire house was infested with them.

Now fleas, their eggs and their larvae can remain dormant for months; a recent heatwave had roused them, they bred prolifically, and the place was – er – jumping. It would take numerous visits by experts in protective suits. Every shred of carpet would have to be torn up and hauled away to the dump. The quote, including a skip for the carpets, came to £870. New carpets would be required after the men in white suits had declared the property flea-free. Ouch!

Now came the arguments and recriminations. The departing tenant – let’s call him Harry – had three dogs with our full permission. John and I love dogs, and we trust our tenants to keep their pets and our property free from vermin. Harry insisted that the property was already infested when they arrived 2 years before, and that they had spent a fortune on Frontline, etc ever since.They blamed the previous occupant – let’s call her Sally. She and her three children had lived in the property for many years with their dog and three cats. Eventually Sally remarried and moved out, and we entrusted the property to an agent. Soon Harry and Sally were accusing each other of all manner of misdeeds.

To cut a long story short, there was no way either Harry or Sally would pay up, Litigation would be both costly and futile and John and I sighed and accepted the quote for the men in white suits to intervene. White suits? Some of our readers are old enough to remember the 1972 movie Everything You Wanted to Know About Sex But Were Afraid to Ask, in which Woody Allen plays a sperm. Youngsters can find out all about it online. Type ‘Woody Allen sperm’ and take your pick.

Our agent, Gary, inspected our property on 29 September, wearing his white protective suit (see left). Woody’s sperm suit (see right) features a tail, but otherwise the resemblance is, as we say here, frappant. We do, however, think Gary is better looking than Woody! 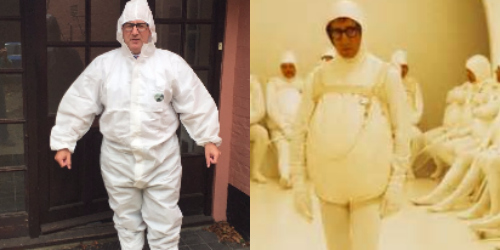 Digression: My English master at Ilkley Grammar School used to say, ‘Ration your exclamation marks as if they cost £100 each’. Well, we reckon Gary in his sperm suit is worth £100.