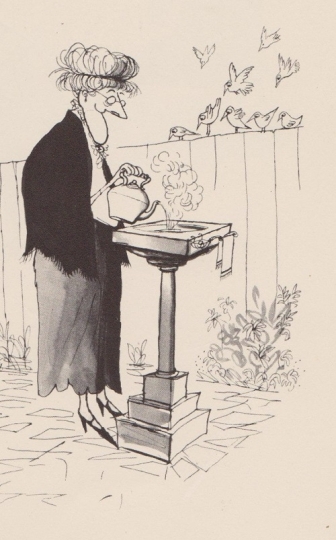 I am writing this on February 28 and the temperature outside is minus 7. Taking into account the windchill factor, it may be as cold as minus 12. My father used to say, ‘Wind in the east, cold for man and beast’ and the British media have dubbed this cold snap The Beast from the East.The sun is shining, but we have closed the shutters to keep in the expensive heat.Digression: Shutters – les volets – are essential here. We open and close ours with great care to avoid disturbing any bats roosting behind them.

Keeping the birds supplied with food and water is important to us. This cartoon by Ronald Searle says it all.

Digression: Ronald Searle is probably best known for Nigel Molesworth and the belles of Saint Trinians, but this cartoon comes from my cherished copy of Merry England, etc (Perpetua 1956).

You can enjoy more of his work here.

Yvonne, the cleaning lady we inherited from the previous owners of our home, lives opposite us and keeps an eye on our property. She called last night to say that the grass near the cottage was white. Sure enough, a water pipe outside the cottage had ruptured and flooded the grass nearby. John turned off the water and telephoned our favourite Mr Fixit, Gérard Lanternier. By the time this piece goes to press he will have repaired the pipe.

Gérard recently renewed our gates and the closed circuit tv system. He decorated the gates with butterflies in my honour and programmed the gate bell to play Für Elise. I never progressed beyond the easy part, but you can hear the whole thing here.

Here he is, with Charity Cottage in the background. You can see the skylight he installed in the roof, the new double glazed frontage and the heat pump on the outside wall – all Gérard’s own work. 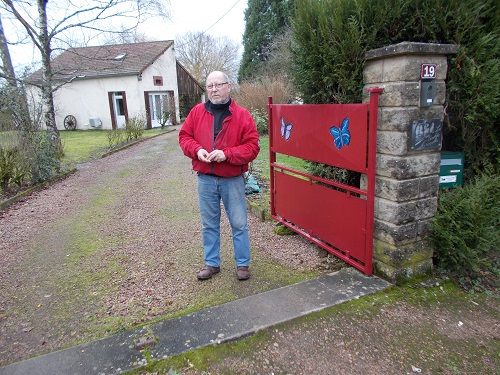 … I goofed. In my February effusion I cast doubt on the story of Saint Valentine. I said:

Hm. I'm not convinced. My deadline looms and I do not have the time for exhaustive research, but I am unhappy about the dates. The only Emperor Claudius I know of ruled from 41 AD to 54 AD. Never mind – it is still a good story.

Our friend Stuart Brook, who married a history graduate, put me right.

Thinking back to days of yore when Jane was still thinking about the Roman empire brought to mind Claudius II … Claudius Gothicus, also known as Claudius II, was Roman emperor from 268 to 270.

Valentine ran afoul of this Claudius’s rules and was beheaded.

On weekday mornings I play online scrabble with my buddy Beardie in Yorkshire, who manages the IT for a hospital. Today he is off work with what sounds to me like bronchitis or pleurisy.

‘Have you seen a doctor?’ I asked.
‘By the time I can get an appointment with a GP I shall be well again and back at work.’

Poor Beardie. Doctor Billiard has looked after us since we emigrated in 2005 and we have never had to wait more than 24 hours for a consultation. In my only emergency in 12 years he saw me at once and called the Polyclinique in Nevers for immediate admission.

In France the patient pays a small fee on the spot, the doctor swipes their carte vitale (see here) and most of the fee – all of it in cases of dire need – is reimbursed automatically.

You need to carry your carte vitale for everything from prescriptions to the annual flu jabs. So when a filling came adrift recently I made an appointment with a dentist in nearby Lormes and took along my carte vitale.

Digression: False teeth were the rule rather than the exception when I was young. A wonderful website tells a fascinating story.

Such was the need and demand for treatment, in the first nine months after the establishment of the NHS in May 1948, 4 million teeth were filled in the UK and queues formed outside dental surgeries. One’s first set of complete dentures became the 21st birthday present of choice for many young Glaswegians and the acrylic smile became the ‘in-look’ for young ladies in particular. The demand for dentures reached such a frenzy that the financial burden on the new NHS was quickly deemed to be in excess of what could be provided.

Doctor Cristina Desbrueres is Romanian. She is married to a local man, Laurent, who is now her assistant, and they have a little daughter, Gabrielle.

‘How did you meet?’ I enquired. ‘I bit on an M&M and broke my tooth,’ said Laurent, ‘and the rest is history.’

M&M? I sound like the Dowager Countess of Grantham, who famously enquired, ‘What is a weekend?’ but I really had to consult their website.

Doctor Cristina replaced the filling but warned that it might not last more than a couple of years, as the tooth was showing its age. I paid and she swiped my carte vitale; then she produced a devis for a bridge.

Digression: In France a devis – a binding quote rather than a guesstimate – is usual. This one set out the work to be undertaken and the percentage of the cost which would be covered by my carte vitale.

Dentistry has come a long way since my youth…

We have a booking in April courtesy of Help for Heroes. A radio amateur is coming for a week in May thanks to John’s ad in Radio Communication. Great excitement – two honeymoon couples are coming in July! Nobody from Combat Stress, alas. Now that the cottage has heating and wifi and sleeps up to 7 people, whole families could stay here.