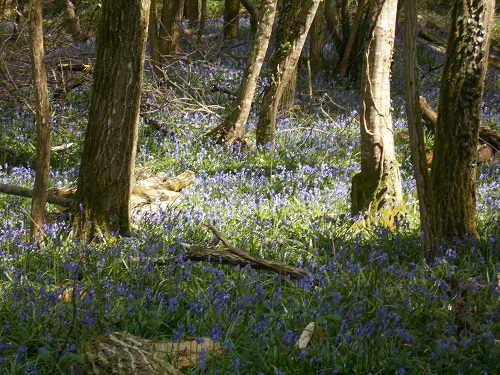 In late April the bluebells along the road to Lormes are a joy. They spill over onto the verges, but are best under the trees. ‘Bluebell’ is an apt name: the flowers look like clusters of little blue bells. Disappointingly their French name is jacinthe des bois, or jacinthe sauvage: wood or wild hyacinth. Botany rules ok, as with our forget-me-not: le myosotis.However, another prolific wildflower is rampaging everywhere: the dandelion. Its polite name, which I have never heard used, is dent-de-lion – no explanation needed – but it is known everywhere as le pissenlit – pee in the bed. True, the dandelion is a famous diuretic, but it has many other uses in herbal medicine. Click here.

Dandelions, both flowers and leaves, have their uses in the kitchen. Try the salads, but John’s mother used the flowers too. Her dandelion wine recipe was similar to this one from the Twin Eagles Wilderness School website.

Digression: One of my favourite French idioms is manger les pissenlits par les racines – literally, eating dandelions by the roots: pushing up the dairies, which is what John’s mum, bless her, is doing after her long and useful life.

A Fête Worse then Death? Never!

Now for the Morvan’s answer to the British car boot sale, village fête or antiques fair: the vide-greniers, brocantes, foires and fêtes. Most sizeable villages host an annual event, usually advertised online and in the local free magazine, Le Criquet. We kick off with the vide-greniers at Bazolles on May 1, followed on May 6 by our own village, Cervon.

Vider is to empty, and un grenier is an attic. Une brocante is similar; the dictionary definition is, prosaically, ‘secondhand goods’ and the French equivalent of Lovejoy is Louis la Brocante. Think car boot sale, but with trestle tables along the village street and around the village square. This being the Morvan, there are always food and drink and camaraderie at such events. There is stuff there that I would be ashamed to admit to owning, but there are treasures among the trash. If you collect old china, table linen and knick-knacks, look no further. When someone dies the family share out what they want and flog the rest. As longevity is the rule in the Morvan, there are bygones and antiques among the junk. Fewer dealers haunt the Morvan than the more populous areas, and there are ‘finds’ that would rate a spot on The Antiques Roadshow.

People setting up home prospect for crockery, linen and cookware. When I was equipping Charity Cottage I haunted vide-greniers with a wish list, and often struck lucky.

Even an event billed like Corbigny’s Foire du Terroir (May 12 and 13) majoring in local produce, includes a vide-greniers/brocante. Corbigny promises a strolling magician and a roundabout for the children in case they get tired of admiring the beautiful white Charolais cows and their calves. 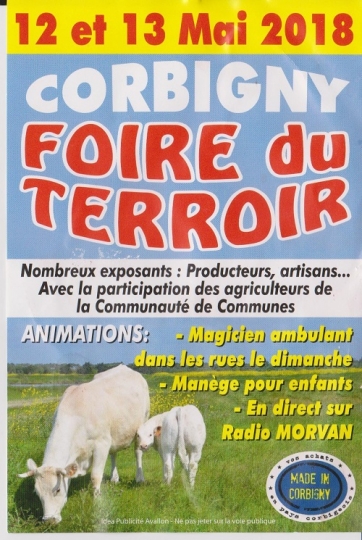 The Fête de la Forêt at Brassy (May 11 and 12) promises free transport between the forest (supervised tree climbing for young and old, dancing, stories and an art workshop) and the village (various stalls, an art exhibition and the chance to make the yoke for an ox cart: oxen not supplied).

Until we emigrated in 2005 triage was what the medics in M*A*S*H did. Here triage means sorting the garbage. Our local council is in love with recycling.

Much rubbish of course consists of packaging – bottles, tins, milk cartons and so on. These have to be sorted into three categories:

• paper and cardboard,
• glass,
• a mixture of plastic bottles, bricks (juice and milk cartons) and tins.

We have three plastic crates in the hall. Once a week we take them to the centre de triage which has a monster bin for each category. Clothes, shoes, etc go in another monster bin outside the salle des fêtes.

The centre de triage has replaced the parish pump (ours is purely decorative nowadays) as the place to meet one’s neighbours. Every community has one – ours is next to the cemetery at Cervon – as do many popular picnic spots.

We have a pair of official issue brown plastic bins: a big wheelie bin and a little one to fit under a sink. Each has a picture of a squirrel in an apron, together with a list of the kinds of waste suitable for disposal therein, and even a helpline for anyone in doubt. Kitchen waste, teabags, used tissues – anything biodegradable goes in the squirrel bin. What about household rubbish for the landfill? That goes in a grey wheelie bin, in pink sacks supplied free of charge by the Mairie. Any other kind of sack is ostentatiously rejected.

The good news is that waste from the squirrel bins is transformed into rich compost, available free of charge at the déchetterie, presided over by Monsieur Gentil. Gentil means kind and/or helpful, and Monsieur Gentil is both. He will tell you which container to dump each item in.

Here you will see old fridges and cookers, builders’ waste, dead TVs and computers, and old furniture that I would have been proud to own when I was young and poor. There are containers for old clothes, dead light bulbs and used batteries. The council sets certain dates when it will cart bulky items away free of charge if you don’t happen to own a big Volvo, but mostly neighbourliness rules OK.