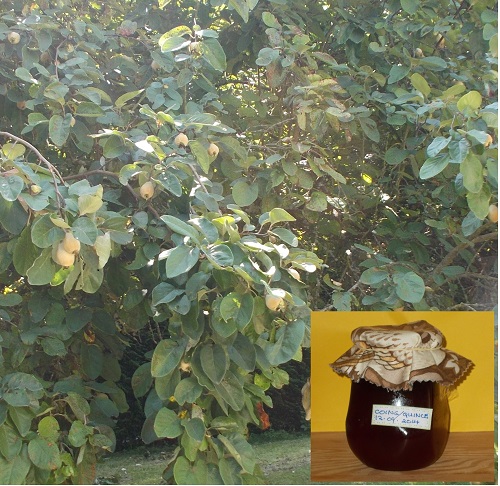 Most varieties are mouth-puckeringly sour and astringent if you attempt to eat one without cooking it first. The most popular way with quinces is of course quince jelly, although if you google ‘quince recipe’ you will be spoilt for choice.Here is a reliable recipe for quince jelly.

Quinces are full of natural pectin, which is the stuff that makes jelly jell. The yellowish-green fruits yield a scarlet jelly. Amazing, but labour-intensive. Quinces are rock-hard and cutting them up is a chore.

Digression: the French for a chore is une corvée, which dates back to the unpaid labour feudal vassals owed their lord.

After you have boiled up the fruit, the juice has to drip slowly through a jelly bag. Visitors learn to avoid the old net curtain hanging from the lintel of the dining room door, gently dripping juice into the preserving pan. Squeezing the bag to speed up the process makes the jelly cloudy.

Unfortunately neither of us likes quince jelly, and there is a limit to how much one can give away. The jar in the picture is dated 2014. You can draw your own conclusions…

I wish I did not feel obligated to make use of Nature’s bounty. I blame my rural upbringing and the jam pan I inherited from my grandmother. Well, 2018 will be the year the birds and squirrels feast on quinces.

The weekend of 14 July always offers excitements, from fireworks to military parades to celebration meals. But the Cité de la Voix in Vézelay, dedicated to choral music, is collaborating with the Morvan Parc Régional to organise ‘something completely different’ – three days of musical rambles and concerts absolutely free. I have the programme here. It seems amazingly well organised, with free coaches between the various points, and a mobile snack bar selling refreshments at the various stopping points. You can do the walks, singing as you go, or just turn up for the concerts.

On Friday 13 July Justin Bonnet will lead ramblers from Saint-Léger-sous-Beuvray to the Gaulish museum at Bibracte, singing all the way. There Martine Clouzot will give a talk on bird song, and in the evening there will be a free open air concert. July 14 – Juillet Quatorze, France’s great national holiday – features a walk from Bibracte to Arleuf, followed by a dance. No band or disco here – the music is provided by the human voice. And so on…

The programme even suggests places to stay. John and I hope that our newly weds from Canada – both are keen walkers and William is a classical guitar virtuoso – will take advantage of this exciting event. 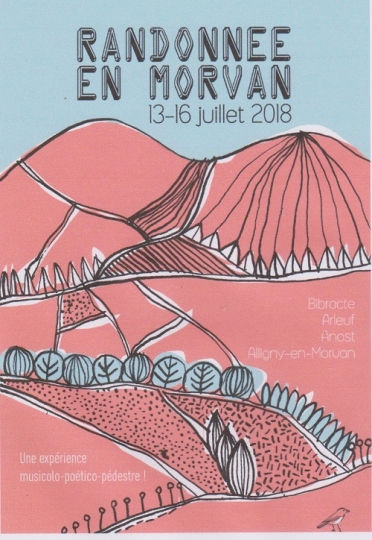 We emigrated to the Morvan in 2005 and have ‘gone native’, as Expat Focus readers will have gathered. HMRC has formally disowned us and we both pay tax to Le Fisc. John makes our joint tax return online here, thanks to our friendly tax inspector Monsieur Picy who, when we first arrived in France, gave us several hours of his time in the imposingly named Hôtel des Impôts at Clamecy. Patiently he led us through the implications of the double taxation treaty intended to ensure expats did not pay twice: a subject dear to our hearts, although the documentation does not make for riveting reading. While our little dog dozed under his desk, M Picy read aloud from his files. Once he paused after a particularly convoluted piece of French and said, ‘Did you understand that?’ We shook our heads. ‘Neither did I. I must consult my colleagues in the Dordogne. They get more Brits than we do.’

When we asked HMRC if they had a Picy-equivalent we could consult, they took six months to reply saying No Way. They did, however, confirm that so little of our income was taxable in the UK that they did not want to know us any more. Well, we could live with that.

However, expats enjoy few voting rights; and long before Brexit was mentioned, John was muttering ‘No taxation without representation’, which was the war cry of the disgruntled American colonists and one of the main causes of the Revolutionary War. There is an excellent piece on the Totally History website.

So John has applied for French citizenship. The paperwork – la paperasserie – is awesome. Every document not in French must be accompanied by an official translation, which needless to say is not cheap. While John was assembling his documentation, the media began spreading ‘dismal stories’ about the difficulties expats might face after Brexit. Type ‘Brexit expat’ and prepare for depressing speculation, from pets to pensions.

Who so beset him round
With dismal stories
Do but themselves confound,
His strength the more is.

from He Who Would Valiant Be.

John, who holds a French radio amateur licence and plays a good game of French scrabble, is looking forward to demonstrating that he has been ‘assimilated into the French community’ and shaking hands at a citizenship ceremony. Interestingly, an Algerian Muslim woman recently leapt through all the hoops to become a French citizen – until she refused to shake hands with the official, which was against her religion. Read about it here.