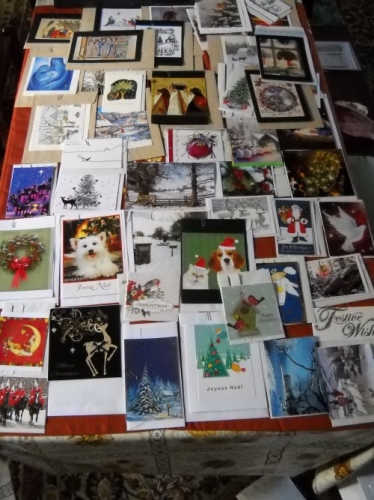 Here we are again: Advent, with its Christmas markets, Christmas concerts and – er- festive fare.

Pedantic Digression: The use of fayre is an abomination second only to the instrusive apostrophe. According to The Free Dictionary website fayre is ‘a pseudo-archaic spelling of fair, fare‘.For my previous musings on Christmas in the Morvan click here.

Now is the time for me to dig out last year’s Christmas cards, my trusty guillotine and my smug little labels to create my recycled cards. 25p per card is donated to Combat Stress. In an ideal world I’d hawk them round the local markets with my Combat Stress collecting box on display, but I lack the chutzpah.

While we’re on the subject of recycling, I have discovered that most opticians accept unwanted spectacles for recycling. After my cataract surgery my old glasses no longer worked for me, and the surgeon gave me a prescription for new ones. I put the old ones in my desk drawer and was alarmed to find at least a dozen old pairs of glasses dating back many years. I typed ‘Recycle glasses’ in my browser and found numerous websites. VisionAid Overseas is one of the charities concerned. I checked with Optique du Morvan, who supplied my new glasses. Yes, they took part in the scheme and were pleased to accept a shoebox full of old glasses.

Now for the mistletoe; we’ll get to the oysters later. Coleridge wrote: 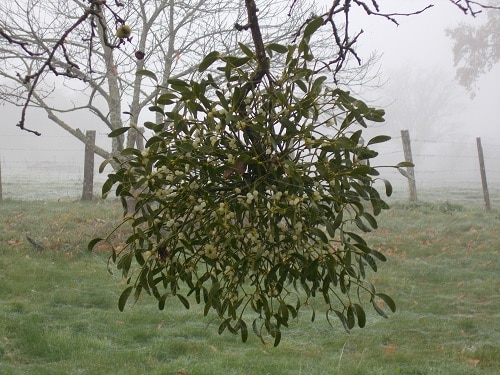 And naught was green upon the oak
Save moss, and rarest mistletoe.

Mistletoe, viscum album, is far from rare here. The best time to admire it is in winter, when the host tree has shed its leaves and you can see great clumps and balls of the stuff. Mistletoe seems to be the botanical equivalent of the flea: it can in theory fend perfectly well for itself, but much prefers to feed off someone else. According to The Mistletoe Pages, mistletoe likes apple trees best. Well, we now have a clump of it on one of our apple trees.

Another website states that mistletoe can be used to treat numerous ailments, from migraine to bedwetting. There is even a recipe for mistletoe tea – made with the leaves, not the berries, which are poisonous.

Now for the oysters, les huîtres. Read all about oyster production here.

Opening oysters is a knack. You need a knife with a dull point and a thick blade, which won’t snap as you ply the hinge open. This website tells you how.

Oysters feature in countless Réveillon menus. Réveillon? Think veille – wakefulness, as it involves staying up after midnight – although the official definitions derive it from réveil, awakening. This monstrous late-night blowout often begins with oysters, goes on to foie gras and capon or turkey, and ends with bûche de Noël, a Christmas log featuring chocolate, cream and sometimes chestnuts. There are countless recipes online, none of which I have ever tried, as John is allergic to chocolate. 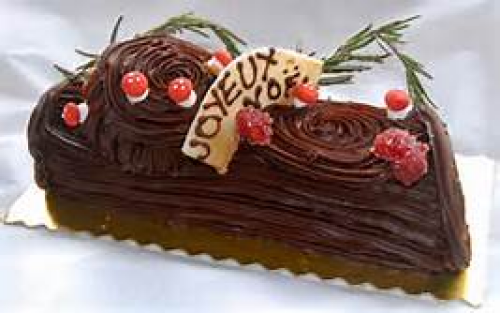 For me Bûche de Noël will always be Chocklit Log. I wondered why our little son’s teacher gave me such pitying looks until I read his essay about Christmas dinner in the Rabson family. Hugo wrote, ‘For pooding we have chocklit log. My mother bis a swiss roll and cuvers it with chocklit.’ Hugo admitted later that he had seen one made on Blue Peter and wished we’d served that instead of my granny’s Guinness Christmas pudding.