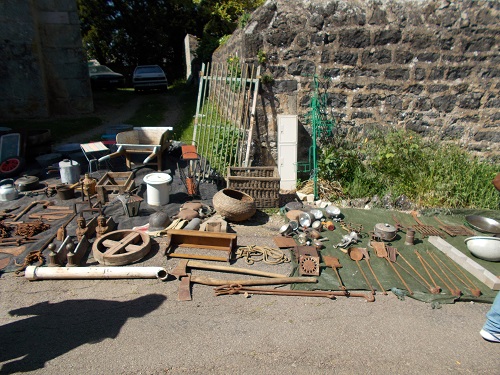 May in the Morvan! Bluebells, fields of golden oilseed rape, the first lawnmower of spring – and the Morvan’s answer to the British car boot sale, village fête or antiques fair: the vide-greniers, brocantes, foires and fêtes. Most sizeable villages host an annual event, usually advertised in the local free magazine, Le Criquet. Cervon’s vide-grenier is scheduled for May 5.Our knowledgeable friends plan their visits to Maré to take in a vide-grenier or three. There will be food and drink and camaraderie. There may well be a roundabout or a bouncy castle for the children. Ebay has not yet caught on here, and when someone dies the family share out what they want and flog the rest at the next vide-grenier.

Even an event billed as, say, a Foire du Terroir, majoring in local produce (see below for the Corbigny version), often includes a vide-grenier/brocante.

Digressions: Un grenier is an attic and vider is to empty. My dictionary suggests ‘secondhand goods sale, car boot sale or (American) yard sale’. Think car boot sale on trestle tables along the village street and around the village square and you won’t go far wrong.

The dictionary definition of brocante is, prosaically, ‘secondhand goods’. The French equivalent of Lovejoy is Louis la Brocante. In practice a brocante is a slightly up-market vide-grenier with pretensions to antiques and overtones of gentility.

Every vide-grenier is an adventure. There is stuff there that I would be ashamed to admit to owning, but there are treasures among the tat. If you collect old china, table linen and knick-knacks, a vide-grenier is your hunting ground.

As longevity is the rule in the Morvan, there may be bygones and antiques among the junk. Fewer dealers haunt the Morvan than the more populous areas, and there are ‘finds’ that would rate a spot on The Antiques Road Show.

People setting up home prospect for crockery, linen, tableware and cookware. I plead guilty to paying a euro or two for linen sheets, beautifully hemstitched and monogrammed a century or more ago but worn beyond repair; I cut up the good bits to make tablecloths and traycloths to embroider. When I was equipping Charity Cottage I haunted local vide-greniers with a wish list, and often struck lucky: a nearly new set of cutlery, a coffee service, a kitchen bin, egg cups, a cast iron jardinière….

Reign of Terroir at Corbigny 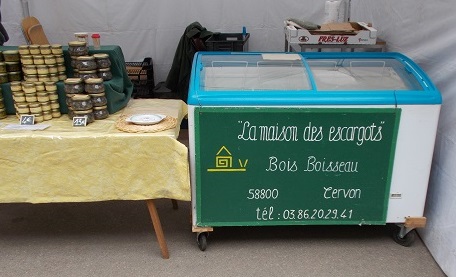 Terroir is not easily translatable. The big online Harraps suggests soil, also agricultural region. There is, however, more to it: think the land, stock rearing and crop production, together with traditional values. Corbigny’s annual Foire du Terroir (May 11/12 2019) features local wine, food and traditional crafts; livestock in the street and a wealth of tastes and smells, from andouillettes through pain d’épice to escargots.

We already banked with First Direct when we moved to the Morvan in 2005, and have stayed with them ever since. They are contactable 24/7 by telephone. There are so few Brits hereabouts that for weeks on end John’s is the only English voice I hear apart from Sky TV and First Direct. It is a joy to deal with a cheerful human being who is patient with a technophobic old lady and is guaranteed to get things right. Bless you, First Direct.

I am also a devoted fan of the British Corner Shop, the online supermarket for expats all over the world. I rely on them for proper curry ingredients, jellies and self-raising flour: I have never taken to adding a sachet of raising agent to plain flour. John loves crumpets, and although I have a recipe we prefer Warburton’s best.

Digression:There is no French word for crumpet: Harraps offers galette épaisse qu’on mange chaude et beurrée and while I am sure they are plentiful in Dordogneshire crumpets are unknown here.

Another item which is unobtainable locally is crackers – not cream crackers or indeed prawn crackers, which are on sale at Aldi, but Christmas crackers. Harraps explains (papillote contenant un pétard et une surprise traditionelle au moment des fêtes) but does not translate, for the simple reason that Christmas crackers are not a French tradition.

Digression: a papillote is a wrapped sweet with a joke or riddle inside: French shops are full of them just before Christmas. A pétard is a firecracker. It took British ingenuity to combine the two. You can read all about it here.

Delivery is rapid, and every parcel contains a message: ‘This parcel was carefully packed by (Mandy)’. In all my years with BCS I have never had a breakage, and I recycle the packaging; I iron the brown paper, save the bubble wrap and bless British Corner Shop.

The person from Porlock was an unwelcome visitor to Samuel Taylor Coleridge during his composition of the poem Kubla Khan in 1797. Coleridge claimed to have perceived the entire course of the poem in a dream (possibly an opium-induced haze), but was interrupted by this visitor from Porlock while in the process of writing it. Kubla Khan, only 54 lines long, was never completed. Thus "person from Porlock", "man from Porlock", or just "Porlock" are literary allusions to unwanted intruders who disrupt inspired creativity.

We get several Porlocks every day, often at mealtimes. The record is nine telephone calls in a single day, offering to insulate our house for 1 euro. Another old favourite is the call announcing a discrepancy in our health insurance. Only one medium has tried it on; I am astonished that her amazing prescience did not warn her that I was a lost cause…

There are worse things than unwanted telephone calls. John and I, mindful that the callers are only doing their job, are courteous in our response. I favour ‘French is not my mother tongue. Please speak slowly and clearly’, which usually puts them off. To callers asking his age (some ‘special offers’ are age-related) John, who has spent a lot of time in Belgium, replies ‘J’ai septante-six ans’.

Wikipedia is not always academically respectable, but their explanation of the reason why Kubla Khan was not completed is worth reading, especially In Other Literature at the end, which mentions Douglas Adams, Adrian Mole, Vladimir Nabokov Stevie Smith, Sir Arthur Conan Doyle and many others. Click on each name and read all about them, and do not be surprised if your soup boils dry.