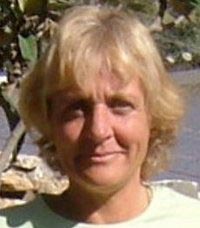 Until the Spanish begin to neuter their cats, there will always be a huge feral population. When we moved to El Hoyo in 2004, we were surprised at how many cats roamed the village, but I guess we’re used to it now. Although not domesticated, they all seem healthy and manage to exist on a diet of lizards, birds and anything else they can catch or scrounge.

As the years roll by, it’s been interesting to watch the feline politics, and to trace the cat family trees. At any given time there is a ruling tomcat, and the latest wave of kittens always reflect this cat’s virility and success with the ladies. Back in 2004, the ruling tom was a huge battle-scarred Siamese mix and the first cat to claim our garden was his daughter, Thief-Cat.She earned her name by stealing the fish off our barbecue when our backs were turned.

Sometimes we’d leave scraps out for Thief-Cat. The only cat she would share her spoils with was a small tabby cat who we named Little Tabs. We guessed that Little Tabs was Thief Cat’s daughter. Little Tabs used to pat our kitchen window when we were preparing food, ever hopeful a scrap might be passed her way.

Thief-Cat inexplicably vanished one day, never to be seen again. But Little Tabs had been busy. Tiny mews alerted us to the fact that she had given birth to two kittens in one of the laying boxes of our chicken coop. We were entranced by the babies but Little Tabs didn’t appreciate our interest and hurriedly moved them out of the garden to a quieter place.

Then one day we found Little Tabs dead and dumped in the village skip. We never found out how she died. However, her kittens, now almost grown, stayed in our garden and claimed it as their own. They thrived and grew into healthy adults. We named them Sylvia and Gravy and occasionally fed them.

Meanwhile, a semi-feral cat gave birth to three kittens on our doorstep and against our better judgement, we cared for them all. We had them inoculated and neutered and managed to find homes for them, not in Spain, but in Germany.

When we went to Bahrain for a year, we worried how Sylvia and Gravy might cope without our handouts, but they did. When we returned, they were still in our garden looking as sleek as they had ever done. The next ruling tomcat was a black and white monster and Sylvia had produced two kittens, one of which was black and white with a comic Hitler moustache who we named Felicity.

Soon after, Gravy disappeared, but Felicity was here to stay. The year after, she too had black and white kittens who grew and eventually went off to find their own fortunes. This year, the black and white tomcat has been ousted, replaced by a giant coal-black tom with eyes like yellow beacons. And yes, you may have already guessed it, all this year’s kittens are tiny black replicas of their father.

Now that summer is here and the sun has bleached all the colour out of the mountains, it’s hot enough to barbecue regularly. As we guard the fish on the grill against the stealthy paws of cats, I am reminded of Thief-Cat, the great-great-grandmother of this year’s kittens.

Where did that 10 years go?

Sorbete de Limon or Spanish style lemon sorbet is such an easy dessert to do. A most welcome refreshment in the heat of summer or a classy after dinner treat whenever. With an abundant supply of lemons all year round, this dish is welcome at any time of year and depending on the options you choose for added flavour, you can transform this dessert from a cooling, invigorating summer dessert to a fresh, fragrant Christmas indulgence.

Method:
1. In a medium saucepan, combine the sugar, water and mint leaves. Cook on high until the water comes to the boil and then boil for 10 minutes, stirring from time to time.
2. While the water is boiling, juice all of the lemons (I do this straight into a measuring jug, so I know where I am) strain the juice into a large bowl and then add the grated peel of one lemon.
3. Once the water and sugar solution has been boiling for 10 minutes, remove from the heat and allow to cool for about 15 minutes, during which time remove the mint leaves. Once the solution has cooled, it will become a syrup.
4. Add your cooled syrup to the bowl with the lemon juice and lemon peel, whisk thoroughly to combine then cover and place in the freezer for 2-2 ½ hours.
5. Once the mixture has almost frozen, take it out of the freezer and slowly add the condensed milk, whisking all the time.
6. Return the mixture to the freezer until completely frozen and ready to serve.
7. Take the sorbet out of the freezer about 5-10 minutes before serving as it will be easier to dish up.

Variations: Use a cinnamon stick instead of the mint leaves for a more fragrant, warm flavour. For non dairy, use two whisked egg whites instead of the condensed milk but increase the sugar to 350g.