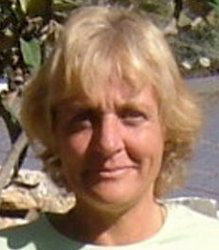 Long before we moved to our mountain village in 2004, Joe’s been forgetful. Before now, he’s put the phone in his sock drawer, and locked the keys in the boot of the car many a time. He’s left the chickens’ gate open, allowing them to range freely through my precious raised flower beds, leaving nothing but stalks. Once he left the engine running in our parked car the whole time we were shopping, around two hours.

So I wasn’t surprised when he returned from a recent shopping trip and couldn’t find his credit card. He felt in his pockets. Nothing. He searched the carrier bags. Nothing. He checked the car. Nothing.

“Could you have left it in Carrefour?”

Phone calls to Carrefour confirmed that no credit card had been handed in.“I’m sorry,” said the helpful assistant. “Are you sure you haven’t lost a green draught excluder, shaped like a python? Somebody handed in one of those…”

“Perhaps you left it at the petrol station?” I suggested.

“I don’t think so, I paid with cash. I suppose I’d better drive down and see. If they haven’t got it, we’d better get on the phone and cancel it.”

I was nervous by now. Had it been stolen?

I’d just discovered a free app for the iPad and smartphones. It’s called ‘SecureSafe’, and you can store all your valuable PINs, passwords and documents on it, and access them from anywhere. Before I went to Australia last month, I’d laboriously copied in everything, and uploaded all our valuable items, like our escritura, photos and the original manuscripts for my books. If the credit card wasn’t at the petrol station, I could easily retrieve all the details from the app, and phone to get the card canceled.

Joe returned from the petrol station looking worried. “I didn’t leave it there,” he said.

“Never mind, I’ve got all the details on the iPad, I’ll phone right now and report it lost.”

But I couldn’t find the iPad. I’d had it last, so it was my fault.

We searched high and low. No iPad. I’d destroyed our credit card statements so we couldn’t refer to those, we don’t possess a smartphone, and the computer’s Internet connection was playing up.

“Put the kettle on,” said Joe. “I’ll feed the chickens and we’ll work out what to do.”

Two minutes later, he burst into the kitchen. “I’ve found the credit card,” he said, waving it triumphantly. “It must have fallen out of my pocket in the chicken coop when I gave them that lettuce when I came back from shopping.”

So all was well. Such are the problems of ageing expats.

Method:
1) Preheat the oven to 190C/375F/Gas Mark 5.
2) Season the chicken pieces with salt and pepper, then heat a little olive oil in a large terracotta cazuela or skillet.
3) Over a medium heat, brown the chicken pieces until golden all over. Remove the chicken and set them aside.
4) While the dish is still over the heat, add the garlic, thyme and potatoes. Ensure they all get a good covering of the juices and cook for a few minutes.
5) Spread the ingredients in one layer on the bottom of the dish. Add the browned chicken pieces.
6) Pour the sherry over and bring to the boil, cooking for a few minutes.
7) Place the dish into the oven and cook for 40 minutes or so until the potatoes are tender and most of the sherry has been absorbed.
Serve and enjoy!