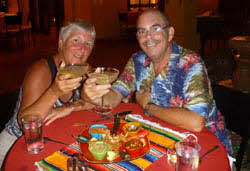 In August 2008, within the short span of just one month, Fran lost her job as a Marketing Executive with a large printing company in Charlotte North Carolina and I lost my job as an I/T Vice President with Wachovia Bank. For years we joked about moving to Costa Rica following a vacation there in 1999. However, months before everything came crashing down, we had a feeling something bad was going to happen regarding our employment situation. So we immediately began looking at what our post employment plan B was going to be. Heck, we were only 58 years old at least 7 year before any sort of planned retirement. But our backs were up against the wall. Failure to plan now would put us at the mercy of our employers and that was not a very comforting feeling.

The first thing we did was to contact our Financial Advisor. We needed to know the value of our ever declining retirement “war chest.” The second thing was to create a very detailed accounting of all our expenses including our debt pay down. It was at that time we realized that our current funds would only last us for maybe seven more years… just in time for Social Security. But the down side to that is we would have spent through all our cash reserves and living on the government dole. That was unacceptable to us.

We began looking for alternative places to live. Having traveled quite a bit to Europe, we thought about moving to the Tuscany region of Italy. We loved it there. But truth be told… our war chest would be depleted in only about three years.

We then began looking at Latin America as our new home, specifically Costa Rica. We knew our dollar could go further there but more research was needed. After considerable reading, telephone interviews, spending hundreds of hours on various internet forums and making two investigative trips, we concluded that the Browne War Chest could possibly last 20 years or more if we were smart and willing to adapt to our new surroundings.

The bottom line is… if you bring with you your gringo lifestyle and habits, then you will probably spend more money in Costa Rica than you did in the good old US of A. The future was beginning to look much brighter.

So after two due diligence trips to Costa Rica, we decided to liquidate the majority of our possessions and move to the small town of Los Angeles Sur, just 6 kms. North of San Ramon de Alejuela in Costa Rica’s Central Valley. There we rented a nice, 3 bedroom home with a spectacular view for just ($500) a month. We bought a car and our adventure was just beginning. After nearly a year in the cold, windy, cloudy and rainy environment of life on the edge of a cloud forest, we decided to head north to the beaches of Guanacaste where we reside now.

Perhaps the biggest challenge facing us was the language barrier. We kick ourselves every day for not studying harder when we were in school. Had we embraced Spanish as a second language 40 years ago living in Miami, we would be soaring right now. However, in the almost year and a half since we moved here, Fran and I are spending more time with Rosetta Stone and talking to as many Ticos as possible in their native language. Sure we screw up.

In fact, I think “Talking to Gringos” is the number one form of entertainment for Ticos in Costa Rica.

We decided early on that we would rent and not buy. After reading too many horror stories of enthusiastic gringos, falling into lust with this country, too many of them felt compelled to buy. They thought they needed to own a piece of the rock. Unfortunately many of them came to find that “their” vision of Costa Rica did not mesh with reality. Upwards to half of those who move here, returned home within their first two years. The sad thing is many of these people are now burdened with houses or property ownership.

The biggest advice I can offer anyone wanting to move to Costa Rica is to rent first. Try the country on for size. If you like it after two years, then buy if the notion still appeals to you.

From what we can see, Playa Hermosa is a “buyer’s market” with home inventory far exceeding demand. If you have the cash and you don’t mind sitting on it for several years, investment buying might not be a bad idea. However for us, tying up ($200) or ($300,000) dollars on a piece of property would not be a wise idea. Yes, it would have some impact on our war chest. While we love the beach life, we are not sure if this is still the place we want to live for the rest of our lives.

Remember… it is easy to buy but damn difficult to sell.

We live an area that plays home to many expats. Since Playa Hermosa is a touristy area, many of the expats who live here are seasonal and not of the fulltime variety. This is completely opposite of our San Ramon home. There, we had a core group of 100 or so fulltime gringo expats. We developed many friends and had quite an active social life. Now that we live three hours away, we are still able to maintain relationship via phone, email and Facebook.

The single thing we love about our new life in Costa Rica are the people. Ticos are warm, friendly, eager to help and are hard, conscientious workers. While many of them do speak a smattering of English, we try to communicate with them in Spanish. While it is a form of entertainment for them, we are learning to speak their language and for that they are extremely appreciative. We do our utmost to promote respect between Tico and gringo and to dispel any linkage to the “Ugly American” stereotype.

Today, we live our lives with much less stress. Our health has improved dramatically with both of us loosing between 20-30 pounds and that’s without dieting. We attribute that to eating better, avoiding fast food and getting much more exercise. We have eliminated almost all processed foods and do the majority of our shopping at local ferias (open air farmers markets), fish markets and local meat markets.

I hate to admit this, but the one thing I don’t like about expat life here in Costa Rica are some of the expats we have met. Fortunately these people are in the minority but they still exist. They come here thinking that Costa Rica is going to be a cheaper America. They are demanding, insulting and just downright a-holes. They forget that they are guests of the Costa Rican people and should act accordingly.

From the day we decided to check into Costa Rica as a potential new home, we have been documenting our research and experiences in a video diary. As an accomplished videographer back in the States, I wanted people to learn from our successes and failures in our new Costa Rican life.

All of our videos can be found on our website www.BoomersOffshore.com

At this moment we have produced 64 videos that we feel accurately reflect our feelings and opinions of what we see and experience here in Costa Rica.

As for the future, we are continuing to pursue our Rentista residency. With any luck, we should have our cedulas before we take our first trip back to the States in October. In August, 2010, we have been asked to speak at the International Living Conference in San Jose Costa Rica. They asked us to tell our story… much like what we are writing here.

Our long term goal is to enjoy our lives, stay healthy, meet lots of people but make just a few new friends and to explore this wonderful country with our two wonderful Costa Rican rescue dogs. Pura Vida…

Muchas gracias y tenga buen dia – Thank you and have a nice day!