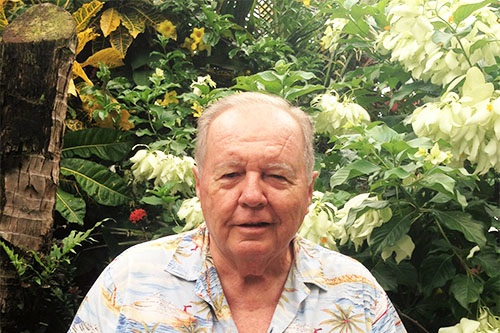 I’m a 73 year old retired, single expat born in Massachusetts where I lived my first 20 years.I have a Master’s Degree in Chemical Engineering and worked 17 years for two major plastics and chemical companies in marketing and strategic planning. I also owned my own computer-related business for ten years and was a management consultant for two firms as well as having my own business consulting practice for over fifteen years. Along the way I have lived in five states (Massachusetts, Delaware, Pennsylvania, Ohio and Florida) and also in Brussels, Belgium for two and a half years.

I had visited different parts of Costa Rica eight times between 2003 and 2008 and always ended up in the Quepos-Manuel Antonio area becoming very comfortable with the region. I loved the natural wildness here, the jungles and the beaches. I also loved the simplicity of lifestyle in rural Costa Rica. I retired from Sarasota, FL in 2008 moving directly to Quepos and have been there ever since.

Leaving friends and family (three adult children scattered across the U.S.) was difficult but I go back every now and then and sometimes they come here – I have to remember that it’s closer from Florida to Costa Rica than it is from New York to Miami. Selling off assets was a chore but it allowed me to adopt the leaner lifestyle that I wanted and enjoy now.

I had become friends with expats in the area during my early visits and relied on their experience. I roomed with another expat for two months but then found an apartment and have been there for almost nine years. The Costa Rican family I rent from have become my extended family.

The U.S. Embassy here estimates there are more than 20,000 U.S. expats in Costa Rica (which is about the size of West Virginia) and the Canadian Embassy adds another 10,000. My guess is there are several hundred U.S./Canadian expats in the Quepos area, an area with less than 10,000 population. This area also has the most visited of the national parks in the country which attracts many expat visitors as well.

Excellent, very friendly and helpful. I have good Costa Rican friends as well as expats. Once, while walking in the street near where I live, I managed to trip over a speed bump. Two women whom I didn’t know came running out, picked me up, took me inside and treated the bad, slightly bleeding scrapes on my legs and elbows with some strange liquid that healed it quickly. Sweet people.

The simplicity of the lifestyle, the lack of pressure and tension. I have found time to write two books about Costa Rica and I also publish a monthly newsletter called the Golden Gringo Chronicles about the living experience here. Writing the Chronicles forced me to research even more deeply into the country and its culture. It’s been a wonderful experience.

This is the toughest question in this list as I can think of very little response. I suppose my answer would be that it’s not having another 50 years to really explore the country and its neighbors.

I suppose the American expat comes out in me occasionally wanting to see things done faster and more logically. But I love the warmth, friendliness and laidback lifestyle here versus the tense pace in the States. I love my native country for many reasons but at this point in my life I believe Costa Rica is best for me.

I love the simple cuisine and the wonderful fresh vegetables and fruits grown here. To be honest, the quality and tenderness of the beef here is not yet equal to the U.S., nor even to neighboring countries, but there are new breeds in the works to change that. Having sampled good cuisine in many parts of the world I can see that Costa Rican cuisine is in the process of maturing and when those great vegetables and fruits are fully employed in creative cooking, an outstanding cuisine will emerge.

Go slow and you will go far. Don’t jump at investment decisions such as buying a lot or house right away. Visit different parts of the country several times before or after moving to learn what climate you like best. Take a place (rent) for a year or two to learn and become comfortable with local customs and practices. That time will be well invested.

Having lived in five U.S. states and now three countries, I have no plans to go anywhere else. I’m looking forward to writing another book or two, one non-fiction, one fiction which will keep me busy for some time. In between, there is always that beautiful beach waiting for me – Pura Vida!

You can keep up to date with Bob's adventures through the Golden Gringo Chronicles.