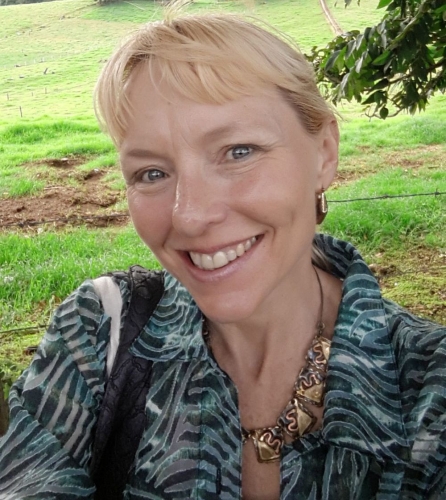 I’m a 50-something US Air Force retired woman. I like working out and do it just about every day. I have 2 dogs, a Schnauzer and a Pekingese/mix.

I really love animals so I volunteer with two rescue groups, ABRAZA in Zarcero and Adopciones Grecia in Grecia. I became vegan a few years ago and it completely changed my life. I was healthy but I had started to notice the middle aged spread that people talk about.After becoming vegan, I lost about 30 lbs and I’m now in the smallest sized clothes of my adult life. Not eating animal products fits in with my animal rescue work and it costs much less to buy food in Costa Rica. It’s one of the smartest and healthiest things I’ve ever done.

Where, when and why did you move abroad.

A couple years after high school, I joined the US Air Force and served in the military for 19 years, when I was medically retired. After the Air Force, I completed 2 years of college and got an Associate degree as a pastry chef.

While attending college in the Seattle area, I was also working in a bakery and decided that I was really tired of working in general. I started looking around for a country where I could retire and live on my pension. I picked Costa Rica because of its proximity to the US and their lack of age limitations on people becoming a resident. Many countries have laws restricting people becoming residents until they’re in their 50’s or 60’s. I didn’t want to wait that long.

Thank Goodness, it ended up being a really good fit and I fell in love with the place. I moved here over 8 years ago. I graduated from college with my pastry chef degree on a Friday and the following Monday, I was on a plane for Costa Rica. I have not been back to the US since.

I had plenty of practice moving from one country to another from my time in the military. The main challenge was, whittling my belongings down to 500lbs. This was the amount I decided I could afford to move to Costa Rica.

The guy from the moving company came to my house to do an inspection prior to the actual movers. He took a look at my stuff and said there was about 1,000lbs worth. This would have at least doubled the cost to ship everything. I had a couple days to go through my things again and decide what I absolutely could not live without. I did it, and the local thrift stores around my home benefitted from 500lbs of donations. I’m lucky because that was the only real challenge.

I sold or gave away most of my belongings in the US, prior to starting my new life in Costa Rica. I used ABC Movers through Association of Residents of Costa Rica (ARCR). They coordinated the move. They quoted me one price and there were no surprises. The movers came to my home in Seattle, brought their own boxes, packed everything, and shipped it to Costa Rica.

A few weeks after I got here, everything was delivered to my apartment. I did not have to go to the port to get it and there were no extra customs fees. Everything was intact and nothing was missing.

How did you find someplace to live?

This is going to turn into an ad for ARCR! I did everything through them.

They have people that work in real estate. I knew generally where I wanted to look and what my budget was. One of their real estate guys came and got me and drove me around to look at furnished apartments. I think I found a place the first day I looked and I was in an apartment in Heredia a few days after that.

No. I’m friends with a couple from the US that moved here before me but
that’s about it.

Pretty good! I speak some Spanish, so I’m able to communicate and the
people who live in my area are really friendly. I love the Costa Rican culture and that probably helps.

What do you like about life where you live?

I live just outside of Zarcero. If you’ve ever been there, you know how
beautiful it is. This year, the canton is celebrating its’ 100 year anniversary. Every weekend, one of the towns around Zarcero has a festival. These have traditional activities and food. Much of the celebrations are designed to promote Costa Rican culture. I’m in Heaven!

Other than that, prices are much lower here than in previous places I’ve
lived in Costa Rica. Rent is lower. Produce is grown all around the town
and doesn’t have to be transported, so food prices are lower. I can say it costs less because I don’t want to recreate a North American lifestyle here.

If you were really into imported food and having a life with all the conveniences of the US, I think it would be very expensive to live here.

I can’t think of anything. I haven’t had to work in over 8 years. I live in a beautiful house with a great view. I volunteer with ABRAZA, an animal rescue group. I work on my blog, which basically consists of interviewing people and telling them I want to write about them because I love what they’re doing. I would not be able to live like this in the US. If I had to move back, my quality of life would suffer.

What is the biggest cultural difference?

Much of the time, in Costa Rica, an appointment time, or even date, seems to be thought of as a guideline. If you make an appointment to have furniture delivered, for example, it may or may not arrive on the day you expect and this is normal. You shouldn’t get mad because that’s just the way the culture is. In the US, you’d be on the phone with the store, yelling at them, if you waited all day at your house for furniture and it never arrived.

Because I live on a fixed income, I had to adapt to life in Costa Rica. I have to live as much like the locals as possible. If you do that, it’s less expensive to shop here. I get most of my clothes at thrift stores.

I shop for groceries at verderias (green grocers), local grocery stores and Pali. (Probably the least expensive grocery store in the country.

Some Gringos don’t like it because it’s associated with Walmart.) I live in an area where furniture is made so I’m able to get custom made furniture at a relatively low cost. I had to buy all new furniture, since I sold everything before moving here.

What do you think of the food in your new country?

I love it! I like discovering traditional dishes and adapting them. (I’m a vegan.) The Zarcero area is very into preserving traditional culture and food. I think some of the best food in Costa Rica comes from here.

This is on display at every festival where you can buy shredded green mango, topped with different sauces, arepas (cornmeal pancakes, made with cheese), tamal asado (a thick sweet custard that looks like a hunk cheese), chilera, and candy made with variations of milk, sugar and coconut. The town next to Zarcero has a chiverre festival every year. A chiverre is a big squash that looks like a watermelon. They make candy, jam, and other really tempting sweets with it.

What advice do you give anyone following in your footsteps?

If you’re living on a modest income in Costa Rica, you need to adapt. Don’t try to recreate your exact life from your homeland here. You’ll go broke.

Costa Rica also scores consistently high on polls gauging the happiness of residents. It is possible for a human being to live here on very little money and have a great life. The locals do it all the time. If you move to Cost Rica, embrace the experience. Don’t live your life with one foot back in your home country. You will never be happy. If you become a part of the society and make it your business to discover the culture, you’ll fall in love with it, just like I did.

My website, www.costaricabargainhunter.com, which started as a way to share really good shopping deals, has grown into so much more. I think it’s a good resource for English speakers who are coming to Costa Rica just to visit, or for a lifetime. I also hope it represents Costa Rica to people all over the world who are dreaming about coming here. (It can be translated into different languages directly on the website.)

Very recently, I also started doing live broadcasts from Costa Rica on my own channel on Periscope. (It’s an app for your phone that turns it into a live webcam. You have a channel on Periscope and people all over the world can see it. If they subscribe, they can get notified on their phones every time you go live. It’s tied to Twitter, so the broadcasts can also stream on Twitter.)

I’m @DoloresPlate on Twitter and Periscope. I do broadcasts that are about Costa Rican culture, climate, ways to save money, and anything else I can think of to help people live well on a budget here. I’m also working with the Periscope people to eventually get my broadcasts saved to my Youtube channel. Right now, they’re available on Periscope for 24 hours after the broadcast for anyone to view.