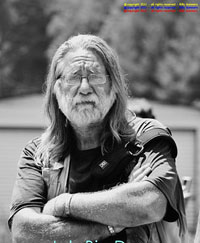 My name is Jerry Nelson. I am a 57yo male from America. As a freelance photojournalist, I get to travel many different places and experience many different things. Much different than the life I would’ve had if I’d have stayed in the small mountain town in Virginia where I was raised.

2009 I came to Costa Rica. Following the break up with my fiance at the time, I just had to “get away”. While traveling so much is a form of getting “away”, I wanted somewhere that wasn’t America; somewhere that people might appreciate the possessions they owned and appreciate the people around them.Doing some research online, I found about 20 countries around the globe that fit my criteria of a home in which to explore. Costa Rica was on the list and the literal dart that I through at the strips of paper on the wall landed squarely on the one marked in red felt tip pen: Costa Rica.

Actually I didn’t face anymore, or less, challenges than any other moves I had made in life. While the language was hard to catch on to, the people were patient and understanding and very willing to help this tired old “gringo”. The money though was another issue. With the exchange rate as it was at the time, an American with dollars could convert could live quite nicely on very few coins. However, the Costa Rican colones went through my hands like it was Monopoly Money. Once I made the mental shift though from dollars to colones, everything was good and I would have some left over after each week of shopping in the barrier.

For the first couple weeks I didn’t worry about it. With the temperature being nice (it IS close to the equator remember), I was comfortable sleeping in one of the many plaza that dotted San Jose. For about a month after that, I alternated staying at cheap hostels and crashing on someone’s sofa. There is a large couchsurfing population in Costa Rica and finding a spot was not a challenge. As I learned the city, I was able to start identifying parts that I wouldn’t mind living in. Eventually, I found a one bedroom flat with a terrace that was only $40 (American) a month.

There weren’t many American expats when I got there but there were numerous expats from Europe. When I left Costa Rica after about three years, the number of American expats had grown tremendously, so I knew it was time to leave.

“Fantastico”! Having traveled overseas extensively before this move, I had learned to try to make an extra effort to NOT appear as an arrogant American. The locals seemed to appreciate my willingness to adapt to their culture and traditions instead of complaining like so many Americans, “That’s not how we do it in America”. I can’t say enough good things about the locals; but remember, how they treat you is in some large measure a reflection on how you treat them.

(Remember, I’m in Argentina now, so I guess you want this answer as though I were still in Costa Rica). The laid back lifestyle. The willingness to share so much of what people had. The entire “feeling” that here was a country that had not been spoiled by McDonald’s on every corner or a WalMart in every town. In so many ways, it was like living in America in the ’50s.

1. Keep an open mind.
2. Give up the need to control.
3. Take life as an expat one day at a time.
4. Seek first to understand and THEN to be understood. Reverse this at your own peril.

To continue enjoying the life I’ve been blessed to live. Right now, in another window on the computer, I have a client’s request to go to Brazil to do a shoot and then possibly Syria. I’m also making plans to go to America for a shoot in August that will last a couple weeks, but other than that, I consciously try to live my life – One day at a time.