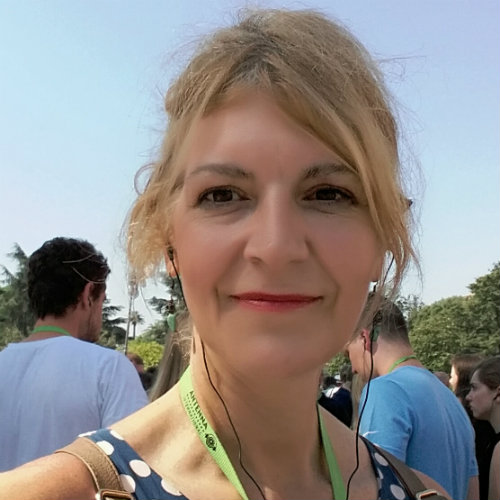 I’m Anastasia Kingsley, born, raised and educated in the USA (California to be exact). My dad was a first generation American, of Croatian heritage, though he never set foot in his homeland. His parents were immigrants and his way of life, all his life, was definitely European. My mom is of French heritage, but much more Americanized. I didn’t speak Croatian or any other language besides English when I came to live here.Where, when and why did you move abroad?

Well it kind of happened by accident :). After meeting some of my cousins for the first time at a big, Croatian wedding held in Tacoma, Washington, I was invited to come for a visit. That was in 1998. I came to Dalmatia the following summer, in June 1999, to the islands where I knew some cousins. I had sold and stored my stuff, so I didn’t feel any pressure about hurrying back. Even so, I never seriously expected to relocate here. When my oldest child was just a baby we considered moving back to the USA but that was in 2001, and after the 9/11 terrorist attack it was put on hold and just never materialized. Looking back, I am glad I stayed here.

I remember telling the US Embassy “no, I am just staying here – for now”. I had traveled a lot – but my first summer was divine – I had never seen such clear and warm sea – with fish barbecues and interesting people to talk to. Soon it was grape picking season, followed by the olives, I learned how to make some cultural dishes, and was invited to the autumnal harvest dance. The Saint Nicholas boat burning tradition was held in early December … and so on. We brought in the New Year, soon it was Easter, and I decided to stay another summer. So I did.

So, except for difficulties in communication at first, no big challenges, I just bought more clothes to adjust for the seasons. My telephone bill to the states was huge due to limited internet access in those days, but now with Facebook and WhatsApp, keeping in touch is much easier and it’s even free.

At this point of my life I live in a village, so no 🙂 But many who live here have lived in different parts of Europe – Germany, Switzerland, France, so they are fairly well-cultured people. I spent some years in Split and there are many happy expats living there. In the past 15 plus years I have met many people from other countries, some who met and married Croatian sailors while others came “back” to the Old Country from America or Australia to visit and ended up staying on, as I did. In my experience, those expats who stayed have turned it into a success – usually becoming self-employed or otherwise assimilating well with the Croatian way of life (coffee – walking – conversation – being frugal) with no intentions of going back “home” (except to visit).

I feel that my kids have a cleaner, healthier life and that people are probably better too. I also like the healthcare system (both were born here, free of charge, and I received excellent care). Things like drugs, alcohol, obesity, teen pregnancy, etc do exist but seem to be less prevalent.

We have a garden, eat farm fresh eggs and fresh meat, and take walks. I live between the Adriatic Sea and Lake Vrana bordered with a forest and biking trails. We hear a lot of birds and see the snow on Mount Velebit. It is hard to find such a combination of nature in one place. I feel safe here, and as I am self-employed and centrally located, I pretty much do whatever I want to do, at least whenever possible.

I began teaching English and tour guiding, which made me kind of an ambassador to foreigners. I have seen more of Croatia than many natives, and feel I am living an ideal life. I have time for friends. Things are close together, I don’t have to commute like I did in LA, and it is peaceful here.

Although I am fluent in Croatian and even a court translator, my American accent remains pretty strong. Upon meeting new people, I always hear the same half dozen questions “where did you live before?” etc. In nearly 17 years of living here there is nothing particularly disagreeable about my expat experience. I had to get used to the “honesty” at first – no lies – when people tell you that you look good, it is really true, because they will tell you the opposite as well! Shipping goods from Ebay or Amazon can sometimes be a problem – depends on the shipper. In the beginning, I didn’t speak Croatian, which was hard… only recognizing random words in a conversation – “America” “Los Angeles” or “Anastasia” as clues to the topic but who knows what else was being said! People here love to Čakulat (choc-you laht) or chit chit about small talk or politics. It’s all good – conversation is a dying art.

In the final analysis, if you decide to stay, to do three things – get a driver’s license, become a citizen, and learn the local language, which is Croatian, of course. It will be easier to learn after you come here via total immersion but try to know a half dozen phrases (you will still sound like a foreigner, but the locals appreciate your effort). My first attempt at speaking Croatian was after watching American TV programs with Croatian subtitles to practice my new words while selling wine in my father in law’s cellar. In 2008, my mom sent me tuition to enroll in a Croatian language course which got me on my way.

I consider it an advantage to see the world with a part American, part Croatian point of view, especially after working side by side with Croatians for 5 years, understand the Croatian mentality (and some of the funny things my father used to say and do!).

The culture of eating and drinking, (i.e. what is to be eaten combined, and what’s not) as well as the art of having good manners. I have learned that meat and salad are served together… preceded by hot soup. There are a lot of unwritten rules to live by; some are helpful and some are a bit archaic, and I enjoy continue learning more all the time.

Here everything is appreciated. I rarely see clothes or food thrown away. In the US good clothes were relatively inexpensive and I rarely, if ever, wore out my clothes (but I do, here!) If I do get bored with something, I pass it along and many mothers do the same. Another tradition I have adopted is to change my clothes when I come home to keep them fresh and unspoiled and wear sweat pants and sneakers around the house, especially if I plan to cook. No matter what their disposable income happens to be, people frown on “throwing away money” – just another example of culture and manners.

“If you want to be happy, listen to your heart”. Buy a round trip ticket, have funds available to live comfortably, and come. Many Croats are multi-lingual and English is the dominant second language. Dobra Došla means “Welcome!”

Being a native English speaker is an advantage and you can probably find a job teaching English repetition here if you are looking for a first, cash-based job. In the summer, many types of work can be found, like in a restaurant or whatnot, but in the winter, it can be trickier (but nothing is impossible).

For myself, even as a teenager, I knew I didn’t want to sit in my rocking chair on the porch with the regret of not having traveled or lived the life I chose. If you don’t like it, you can always go back, but as Shakespeare says, nothing ventured, nothing gained.

As the kids get bigger, to see more of Europe. I am also planning a trip to the US, as my mom is in her 80s. I’d like to continue learning more about organic gardening and maybe build a greenhouse. Another goal is 100% self sufficiency “off the grid” with our own rainwater system and solar based heating and vegetables.

I have thought about living 50/50 in the USA and Croatia but probably not. I like it here too much. The kids are dual citizens so they also have a choice. I also plan to play more music which I have more or less put on hold for years (I was working and commuting too much before!).

Meanwhile, my spouse and I dabble in tourism – apartment rentals for locals and tourists alike, some real estate, taxi service, and guided tours; and in the offseason, teaching, translation and performances.

You can keep up to date with Anastasia’s adventures on her blog, AmerikankaInCroatia.com, and take a look at her business, KingsleySuccess.com