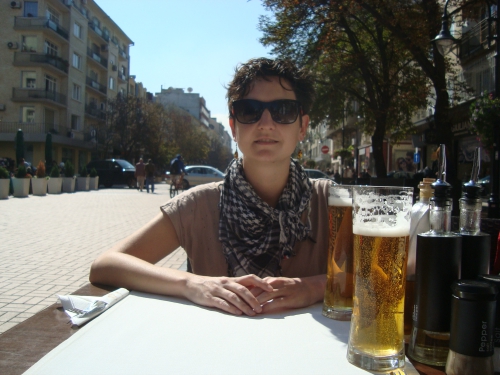 I moved from Australia to Croatia two years ago in March of 2013. That’s the easy part. The hard part is why. I suppose I’m not your average expat. I didn’t move for my career or for love. I’d been living in Sydney for a few years, with a good job and a good group of friends.But I just felt disconnected from everything. I hated going to an office every day. And one day I suddenly thought – why not move to Croatia? I have family there. And it seemed like exactly the right thing to do. So I saved as much money as I could, got rid of as much of my stuff as I could, and here I am.

I had accumulated a lot of stuff over the years. Some of it I sold. I put quite a lot of things on a table in front of my house with a sign that said ‘Free Stuff’. That was fun, seeing people find a cool toy or old magazine. One woman took all of my pillows and sheets! But it was also hard. A lot of those things I’d kept for a reason, and it was hard to let them go, even though they’re just things. In the end I still came over with far too much – 10 boxes of clothes and books!

There are quite a few, mostly diplomats and their families. But there are also a lot of people who are here for love. In my Croatian class we had people from Albania, Syria, Peru, China, Ghana, Zambia, Sweden, Ireland and Luxembourg! The great thing about being an expat is that you get to meet the most amazing people and have extraordinary opportunities. I never thought I’d be friends with ambassadors, but I am! My classmates were invited to be in the audience of MasterChef, just because we’re all foreigners. It’s bizarre.

It’s pretty simple here. People in Zagreb are never in a hurry. They take time to stop and enjoy a coffee or a wine with a friend. Also, it’s pretty cheap. My monthly expenses are what I was paying per week in Sydney.

Zagreb is a really beautiful city. It’s small enough to get around, but big enough that it has everything you need. And there is always something on. There is a festival every week in Zagreb. People love music and art and culture, and they also appreciate street art and comedy. It’s a great mix. Where else in the world could you have a Museum of Broken Relationships?

Just the little things. Good tea, breakfast cereal, soy sauce. Those things are hard to find. The big things in life are easier to sort out because they’re more important. For example, do I miss my family? Sometimes, but communicating is easy these days with Skype and Facebook. It’s only ever the little things that are annoying, because they’re not big enough to try to fix.

What is the biggest cultural difference you have experienced between
your new country and life back home?

They don’t have breakfast! Seriously, getting a poached egg and bacon is impossible.

For some people, changing countries is a big deal. I’ve never felt that way. Just relax, don’t stress too much and be prepared to wait a long time to do anything that involves bureaucracy. You must have patience, and that’s probably true no matter where you move to. Zagreb is a pretty easy city to live in, just make sure you have enough money and all your papers in order.

Definitely here for another year so I can get fluent in Croatian, and then who knows? Maybe Italy, maybe France. But no plans to go back to Australia in the immediate future.