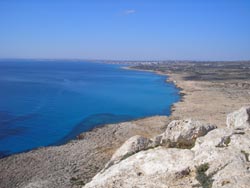 I am a 51-year old single woman from the United States . I have travelled extensively and have a bit of an adventurous nature.

In 2004 I moved to Moscow, Russia for my job. I lived in Russia for 2.5 years, then I was transferred to Slovakia where I lived for 1 year, and then I was transferred to Sofia Bulgaria where I have been living for 2.5 years. In between Slovakia and Bulgaria, I lived in Cyprus for 3 months while I looked for a home and decided whether to move there permanently or not. I have just moved to Cyprus permanently.What challenges did you face during the move?

Finding out information on what a US citizen needs to do to establish residency in Cyprus. There are plenty of Brits in Cyprus, but I have yet to meet another American.

I spent 3 months in Cyprus looking at properties. I worked with several estate agents. One day I was checking into the costs associated with buying a car and the salesman asked me about my home. I told him I was looking and he told me his daughter-in-law worked for ERA. I was just being polite and took her number, but then he called her and so I explained how I had already looked at many properties and was doubtful that she could show me something that I had not already seen. I was wrong – she found me several that I liked and I ended up buying one of them.

It is a 2-bedroom 118 square meter semi-detached villa in a development of only 5 homes. All of my neighbors are Cypriot, which should help with my attempts to learn to speak Greek. The buying process was easy. Just make sure that you get a lawyer and that the lawyer has no association with the builder or the property owner. My house was scheduled to be finished September 2009, but was not finished until January 2010. No problem for me because I was flexible.

There are many properties on the market right now. The prices are down a bit, but not as low as they should be. Building new properties has slowed a bit in the past 2 years.

They all know me because I am THE AMERICAN LADY. They are all very nice and once I learn Greek, the relationship will just get even better.

The climate, the slow pace of life, the safety, the fresh fish and produce, the wine, the incredibly clear sea, and the fact that you can get baklava 24 hours a day.

Try it out for a while to see if it is for you. Be patient and always smile when dealing with the different government agencies in your new country. Flexibility will take you a long way!

To enjoy my new life in Cyprus with my cats and finally have a garden and do some scuba diving.