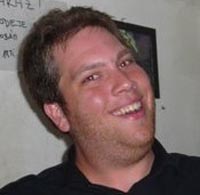 I’m currently in my early 30s, and I have never really done anything the way that people consider ‘normal’. I had a pretty normal upbringing in a middle-class family in the suburbs of San Francisco, in the United States. But after I finished high school I stopped doing things the way I was ‘supposed to’.

It took me nearly seven years to finish university because I chose to work at a half-dozen different jobs while I studied. When I graduated I chose to move abroad to the Czech Republic as an English teacher instead of get a job and start a family. But I wasn’t satisfied with that kind of life either and decided to open a bar with my friend here in Prague.After a couple years of 80-hour weeks at the bar I decided that I had had enough of that. But instead of getting a ‘real’ job I decided to become a freelance writer and teacher with my own business and my own hours. Basically I’m someone who is trying to find my own way in life.

I received by Bachelor’s degree from university in the Spring of 2006 and I quickly learned that no one was rushing to hire someone with a degree in European History. The only job I could get was that of a pizza delivery boy and I felt that I could do something far more interesting with my life.

Europe had always been attractive for me because I had spent a semester studying in London while at university and had fallen in love with Europe. Its history, architecture, culture, and romance attracted me, and the idea of moving there was kicking around in my head.

One day I met up with one of my friends from university and he told me about how he had just got back from Prague, Czech Republic where he had taken a course on how to teach English to foreigners. His description made the course and the city sound magical, and when he said that he could get me a discount on the course I was sold. I called the school and signed up for the November course, which was less than a month away at the time. I bought a one-way ticket to Prague, put my stuff into storage, and headed off the Europe to see what would happen

The move itself went perfectly, as I had a temporary place to stay when I got there and I had only brought the bare essentials as I was planning to build a new life in Europe. But the biggest challenges came in the first few days and weeks of actually trying to live in the Czech Republic instead of just be a tourist.

There are certain customs or rules that every culture has that you will never know about until you actually experience them. One of the biggest challenges was learning all of the different ways in which Czechs do things from Americans. There is no guidebook for this because these things only happen outside the centre, where locals actually live. So the only way I learned was through doing something wrong, getting yelled at, and then vowing to never do that same thing again.

While I learned eventually, it made for some very frustrating and unpleasant episodes my first few weeks in the Czech Republic.

When I started work at a language school I met another new girl who also needed a place to stay. The two of us decided to team up and try to find a place to rent where we could live together as flatmates. We contacted a rental agency which specializes in helping foreign workers find housing. They were able to find an affordable flat for us a little outside the city centre, though the fees we had to pay them were more appropriate for a large international company than for two recent university graduates moving to a different country. Despite the huge amount of money we spent, it was invaluable to have an agency helping us and looking out for us.

The neighbourhood of Prague where I live is one of the more diverse cultural areas of the city, and as such has a high proportion of expat residents. While this means that there is a huge variety of restaurants, bars, and shops features food and goods from dozens of different countries, the neighbourhood doesn’t seem very Czech at time. Additionally, Prague is such as small city and so easy to get around that it feels like everyone I know lives close to me, and the expat community across the city is incredibly tight.

Over the years I have learnt to speak decent Czech, and that has caused Czech people to look on me much better than they do those expats that never bother to learn their language. Through friends and work I have met hundreds of Czech people and in general gotten along quite well with them.

However, there is always an invisible barrier between me and the locals due simply to the fact that I am not Czech. This nation is extremely homogeneous and citizenship is only granted to people with Czech ancestry. That makes the people very proud of who they are and gives them very much this sense of ‘Us’. No matter how long I live here or how well I speak the language, I will always still be ‘The American’ and never truly be accepted by this society as someone who belongs here.

By far my favourite thing about Prague and the Czech Republic is the ease of life here. There are no laws setting closing times for pubs and you are generally free to do whatever you want with your leisure time, as long as you aren’t bothering anyone else.

Culturally, people here care far more about holidays, family, and relaxing than people back in the United States. Companies routinely give their employees four or five weeks of paid holiday every year versus two weeks in America, and the favourite weekend pastime of Czechs is spending the weekend somewhere in the lovely countryside relaxing with friends and family. It’s a slower country, with far less stress and manic work than in the US, and I really love that part of living here.

What do you dislike about expat life?

One of the hardest things to deal with about being an expat is the dynamic and tenuous nature of personal relationships. Very few of the other expats I meet are here permanently. Whether it is because of their work assignment, their own personal drive for more adventure, or any of the other thousand reasons they might have, the majority of people only stay for a year or two.

The causes all sort of relationships to be compressed and quickened as there is no time to waste. Instead of developing friendships or romantic relationships at a normal, healthy pace, everything is sped up so that new couples move in together after months, not years. And no matter how much you speed up the relationship, neither person is ever prepared for the suddenness of the ending and the departure.

Over the years I have grown very wary of becoming close to people in order to avoid the discomfort of the hyper-intense relationships and the quick goodbyes and I fear that I have grown far less willing to open myself up and make friends with new people. If there is one thing I could change about expat life, it would be this.

I stepped onto a plane with a one-way ticket to Prague a mere three weeks after making the decision to move abroad. Most of my friends from America told me that they thought I was so brave and adventurous and that they could never have done a thing like that. But I think that part of the reason it was so easy for me to go is because I didn’t give myself any time to think about it. I never had a chance to sit and contemplate if this was the right decision, or if something bad would happen to me. I just made the decision, got myself ready, and went.

Most people are not held back from doing something like this by real, legitimate reasons, they are held back by fear. If you don’t give yourself any time to get scared, you will find that it is actually much easier than you think.

I am still very happy with Prague and the Czech Republic and am planning to stay here for at least a few more years. But the Czech Republic is still the first place I’ve ever lived as an expat, and I feel it would be a waste of my youth to not go out and work and live in some other countries and cultures before it is time to settle down and start a family. I would love to see somewhere completely different from Europe and North America such as Vietnam or Thailand. A year or two in South America is also something that I would love to experience. I may eventually return to Prague to settle down or continue travelling the world. That’s for the future to decide.