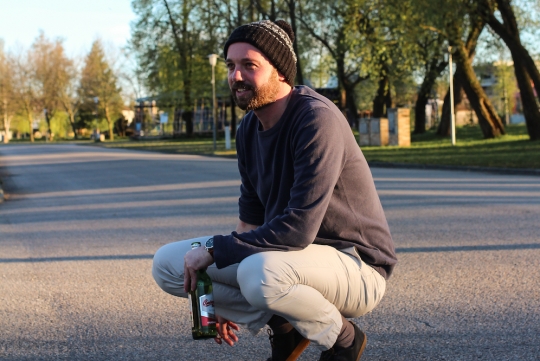 I’m Tom, a British expat, living in the Czech Republic.

Mainly getting all of the administrative things in order: taxes, opening bank accounts, registering with a doctor, foreign police, etc. In retrospect it doesn’t sound so bad, but at the time I felt I wasn’t living; I was more like a secretary for my own life (a position which paid terribly!)

Some friends-of-friends had a spare room, so I stayed there for a while. Then I began to look for my own place when I was more settled.

I am based in České Budějovice, which is a smaller city in the South Bohemian region. There aren’t a huge number of expats, but I would say I know most of them. It’s interesting to hear how different circumstances led them to live here.

I think that when you are an expat there will always be some level of cultural distance, and once you accept that it becomes much easier to live anywhere. That said, I don’t think the Czech and English sensibilities are as different as many Czechs think (especially when you talk to younger people).

I like the work-life balance here, and how Czech people are very ‘outdoorsy’. There are always people riding their bikes around and enjoying ‘the nature’. Also, eating out is very affordable (there are special lunchtime menus in all the restaurants, which work out at about the same price as cooking for yourself).

Whenever I speak Czech, people reply in English, or worse still German (a language I don’t know at all). I am beginning to understand why some expats here have given up learning the language altogether. If you’re interested, I have written more about this here.

I know it is dangerous to generalise, but to me Czech people seem much more direct than English people. For example if you say, “it’s cold today,” you might receive the following in response: “What do you expect? It’s winter.” In England we tend to dance around a subject and not really say what we mean. So for me the Czech frankness is refreshing.

I really like Czech food, but it’s very heavy (lots of meat), so I don’t tend to eat an awful lot of it. That said, there are tonnes of other options – including some amazing vegan restaurants. In terms of drink, it’s hard to look past the beer, which is (as every Czech will tell you) the cheapest and best in the world.

I’m going to channel some Czech directness here: I think many people see the idea of moving to a new country as the answer to everything– and unfortunately, it most definitely isn’t. You will still face many of the same problems (and probably some new ones too). I think this is important to say – because you can get the wrong impression of expat life when you rely only on Instagram photos and Facebook updates. That said, I feel fortunate to have the opportunity to live in a foreign country, and I think the relaxed atmosphere of a smaller Czech city is a great choice!

At the moment I am happy in the Czech Republic; I like that it is in the centre of Europe with easy access to other European countries.

You can keep up to date with Tom's adventures on his website.