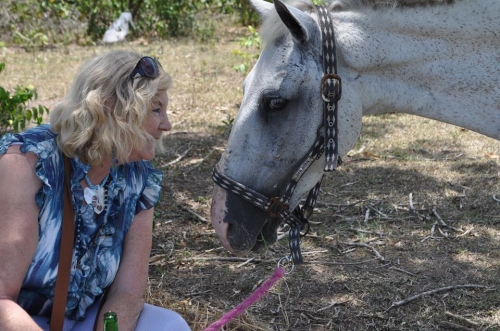 Pauline Wren, a retired teacher and psychotherapist. For the last nine years I have been running a project to bring together poor and deprived children and abandoned, neglected and abused horses and other animals. Project Isobel is having to close in its present form due to lack of financial support. Over the years we have helped many families, children, horses, donkeys, dogs and cats.We have applied for funding for a mobile clinic to work with horse and donkey owners along the north coast. We see this as the way forward for us, but we still need a lot of sponsorship. Currently we have 3 – 4 children from poor families living on site with us.

I moved to Sosua / Cabarete in September 2003 but have continued to spend three months a year in England. I moved here primarily for my health and because I love it here.

During the move I encountered major problems with a Swiss lawyer here and a Canadian agent who did not fulfil their duties responsibly in terms of my purchasing an apartment. Fortunately, eventually I contacted the lawyer’s Dominican boss and everything was resolved very quickly. The agent is since deceased and the lawyer was removed to another part of the island. It is critical to find a reputable lawyer and to ask questions till you get an answer you are comfortable with. There are many unscrupulous lawyers and agents, unfortunately, and no governing body to keep control of what is happening, it seems.

Coming to terms with officialdom in all areas of life was a huge challenge for me, because of its inconsistency and illogical [to me] rules.

I also found it very difficult to get definitive answers about a number of things and to find reliable, good workmen to complete renovations on the property I bought. They do exist, but it takes a while to find them. It is hard to come to terms with the effects of the salt air and relentless sun on appliances and electrical / electronic systems and the poor quality of materials in so many cases.

Nonetheless, there were many good things that happened too in terms of people helping me, e.g. I left my phone in a taxi and when I eventually called it, the driver sent it back to me from the other end of the island and categorically refused a reward.

The climate, the outdoor life, the vibrant colours, bachata, the existence of an expat community, the local population, greater availability of commodities an expat might want, the beauty, the mountains, the choice of restaurants. I also love how wherever I go, there will almost always be someone I know who will acknowledge me or have a chat with me. I am fairly certain that if I had first visited the south I would never have come back to this country!

How difficult it is to deal with hospitals, mobile phone companies and government offices; the lack of obedience to the law, the lack of application of the law, the corruption; the disregard for life and limb on the part of motor bike drivers. I don’t like the fact that if you are white and there is an accident, even if it is not your fault, you will be paying. I do not like the strong element of revenge in this culture and I find the employment laws help to keep wages very low. The more you pay, the more you owe in liquidation, usually to get rid of an employee who has let you down in significant ways!

I do not like the fact that local people who appear to be genuine seem to be able to ‘act’ this way for a considerable amount of time before letting you down significantly, e.g the taxi driver who had been transporting a family for a couple of years and then parked in suspicious circumstances in the only place where there were no surveillance cameras and left the vehicle unsupervised while the family were getting some groceries, with the result that all their possessions were stolen.

What is the biggest cultural difference you have experienced between
your new country and life back home?

The way things are done in so many instances and the way the goal posts seem to move depending on whom you speak to. Sometimes that can work as an advantage, however.

Get advice from a number of people who have been here a long time; listen to what they say! Don’t take the first thing you hear as necessarily the truth in any circumstances, unless you have known the person for a long time!

Use your brains; don’t sign documents without understanding what they say; ask questions and ask again if the answers don’t make sense;
keep an open mind but make people earn your trust rather than giving it to them without any proof of their integrity; if you want a job doing, supervise it yourself unless you want some big surprises, some of them unpleasant!

If a tradesman wants you to pay half up front for work, insist instead on going with him and paying for the materials directly yourself. I would suggest paying interim payments for work in front of his workers and insisting on him paying them in front of you, or you may find yourself without workers to complete your job.

Don’t be fooled by charm, either from the locals or the expats. Many of the expats behave in ways they would never behave in their own countries.
Don’t fall for the story about the sick family member – usually mother or child – in order to get money out of you. This story comes out over and over again and it is amazing how many times a parent or grandparent allegedly dies!

I am staying here, though spending more time in my home country as well. I shall continue to help animals and children. It has taken a long time, but I hope I have learned how to look after myself more effectively now!

Pauline writes about her experiences in the Dominican Republic and the animals and children she helps on her website, ProjectIsobel.com.