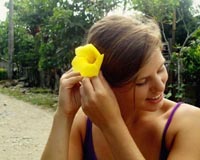 Excited by adventure and discovery, fascinated by science, mildly obsessed with lizards, attracted by new places and weird food, interested in new people but quiet until I get to know someone, that’s the nutshell. More factually, my name is Maureen (totally unpronounceable in any language except English) Stimola, and I am 23 years old.

My Long Island parents moved to Vermont and raised me snowboarding and gardening, so I learned to love all things green and natural from a young age. I decided to combine my passion for nature and science, and graduated from Columbia University in 2012 after studying Environmental Biology for 4 years, and spending most of my free time in forests, museums, and laboratories.In my junior year, I spent a semester abroad in Ecuador, and then jumped directly to the Dominican Republic to do my thesis on the thermal ecology of Anolis lizards.

I moved to Tena, in the Ecuadorian Amazon, in October 2012 to work as a Princeton in Latin America Fellow with Fundación Runa. Runa is an NGO focused on promoting sustainable agricultural practices and providing resources to small-scale farmers throughout Napo Province.

This was a big choice to make: I was considering another (paid) offer in Peru through the PiLA Fellowship, but even despite the fact that Runa would be an unpaid internship, I knew that my main priority was to return to Ecuador. In a sense it was an emotional decision rather than a logical one, but Runa ultimately found room for me as a paid employee upon arrival (phew!). Gambled and won.

I knew from the onset that I would be away from family for a full year, so making time for everyone in my life and saying “see you later” was harder than I had imagined. Moving to the Amazon was also a totally different experience then I had expected. With my study abroad program I went all over the country, but our Amazon excursion was 10 days deep in Orellana on a biological reserve – no local people around to meet, just monkeys! It was beautiful, but I had no idea what people, food, culture, language, etc. was like in this part of the country. For a while, I felt like I hadn’t even returned the same Ecuador that I left behind, life in Tena struck me as totally foreign.

That was relatively easy! Runa was on my side, and they had arranged for me to stay with an awesome homestay family. I lived extremely cheap ($180 / month for food and housing) for two months in a relatively traditional Kichwa household. This had its perks (lots of people to talk to, parties, no worries about buying groceries) and downsides (no running water most of the time, having to hand wash clothes, unreliable transportation to the office), but in the end I built a great relationship with the community. After that, it was word of mouth to find the next place! A Runa employee was leaving the country so I moved into her old room in an apartment shared with friends.

YES. At first, in my homestay community, there were no other expats. I always had gringo support at the Runa office in the next town over when I went to work, but in the community I was on my own. Now that I live in Tena, I have become introduced to a whole network of expats who run businesses, work with NGOs, and teach. There is also a steady current of kayaking and rafting tourists moving through Tena at any given time, due to beautiful quality of the rivers in the surrounding area.

It took some time living and working in Kichwa communities to get used to the pace of life and people’s perspectives here, but now I am totally comfortable and fairly well known. Tena can be bustling with people in high tourist seasons, but it’s small enough that I know most of my neighbors and see friendly faces passing me regularly on the street. When I go to communities, I’ve build enough of a rapport that working just feels like I’m going to say hi to old friends! There is always the occasional local who assumes I’m a newbie and, say, tries to rip me off at the market, but they come to see that I know my way around when I explain, in pretty natural-sounding Spanish, that I live in the area and earn an Ecuadorian salary!

I love that I feel totally safe, in a country where I often have to be on guard. As long as I pay attention to what’s going on around me, I am never afraid of violence or robbery. I could walk to the local bar alone without a hassle. I also like that everything is so darn cheap! Food is cheap. All the best attractions and fun things to do are more or less free. Rivers, waterfalls, wildlife parks, and lush mountains abound. I also like that the people are so relaxed, generous, just living life and doing as much as they possibly can with the resources available to them.

Even when people are poor, they always have a bounty of food from their forest gardens – and they’ll always share. Also, adventure! Where else could you find a giant snake hissing outside your bedroom window, eat grubs, cross rushing rivers on bamboo bridges, have a near fatal canoe accident and hike through the jungle wearing the Achuar Nation President’s square-toed dress shoes?

I miss my family all the time; being able to visit and talk regularly with my family is a sacrifice that I always question making. There are times when skype just isn’t enough (like when we’re talking and my mom informs me she is making her famous chicken piccata, or when my brother graduated from high school). I also live in a particularly less developed part of an already developing country, so there is a lot of frustration with utilities failing, not having water or electricity, getting food poisoning or parasites, no internet, gastronomic phone bills when a family member has a birthday, etc., you get the idea!

If you have the urge to go somewhere without understanding why, just go for it! It’s always better to take the risk than to wonder what might have been. If you travel in a developing country, leave you pretensions and expectations behind and go with the flow. Don’t expect things to work like in your home country (like transportation, workplace dynamic, punctuality), and definitely don’t be stressed when things go wrong – because they WILL go wrong, probably in weirder ways than you can imagine right now.

I plan to continue working with Fundación Runa for another year after the end of my term with Princeton in Latin America this October, and get more people to fall in love with the Amazon! After that I am hoping to move back to North America, to either New England or a nearby part of Canada, so I can be closer to my family for a while. I would like to work on a farm for a while, and go back to school to pursue and advanced degree in Evolutionary Biology, Ecology, Sustainable Agriculture, or something along those lines. I’ve also been dreaming of learning French or German, and doing a huge backpacking trip through South America or Europe!