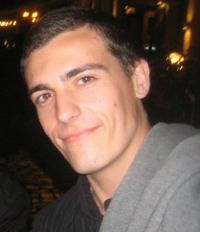 My name is Matt. I am 28 years old and from Australia. Born and raised in Sydney and this is also where I am currently living. After so many years away I felt I should come back to Sydney and spend some time with my family. Living in Europe was a very unexpected event for both myself and my family. It just kind of happened randomly. I work for a major transportation company as a logistics coordinator but am just yearning to get back on the road so this job is just temporary in order to pay the bills. Am not sure where my next stop will be in the world as there are a lot of options but ultimately, I will end up back in Estonia.Where, when and why did you move abroad?

It was very much unexpected and unplanned. In April of 2009 I decided I had had enough of my everyday life and bar job and needed to escape. I handed in my resignation and three weeks later was on a flight to Istanbul on a one-way ticket. It was only supposed to be a three month break. I travelled around most of Eastern Europe and eventually found myself in Estonia. I fell in love instantly with that gorgeous city. The three months ended up turning into five years. I did some more travel after going to Estonia but I kept finding myself heading back there and after my fourth visit I figured I should just settle down there.

As an Australian with only one passport, it would definitely have to be the visa and residency situation. Australians can only stay in the Shengen Zone for three months without a visa but that is purely for travel purposes. Getting a working holiday visa was quite easy but it is a stupid visa though as it didn’t provide me with an identity card and therefore I was still ineligible to work legally.

For work, I started off volunteering in a hostel for a while where they don’t care about your visa status and then was lucky enough to find a job in a bar which would pay me in cash. Looking back, it was a miracle I wasn’t caught. I was probably the only foreigner working in a bar in Tallinn’s Old Town, who could barely speak Estonian, and I stood out like a sore thumb.

Later on, when I established my own business, despite being legally entitled to residency, it was still a two-year battle to actually get it as the government had enforced caps on the number of foreigners who get residency each year. So, I was caught in a strange scenario where I was legally entitled to stay in the country and operate my business but because they still wouldn’t grant me residency, technically I was living and working there illegally.

When I first arrived in the country I worked for my accommodation in a hostel. It was a time in my life when I could handle the constant parties and sharing a room with nine other people but after a year of that lifestyle I got very tired of it. Later on when I found a job that would pay me in cash I was fortunate enough to find an apartment almost straight away.

It is really easy to find somewhere to live in Tallinn, the challenge is finding somewhere that is liveable. Everything can be done online and even in English. You organise with the agent or owner to go and look at the property, decide if you like it or not, and can usually sign a contract on the spot or at least a day or two later. You pay a deposit in cash and that is it. Each month, the landlord comes around and you pay him the rent and bills all in cash and you’re done. Simple as that.

The exact number of expats isn’t huge (it is growing though) but considering the small location they occupy, it seems like there are a lot, so I guess you could say yes. Tallinn is a relatively small city with only about 420,000 people and the majority of the expats work and socialise in the Old Town, which is very small, so you can’t throw a stone without hitting an expat. The government has done a great job with promoting investment in the country and it has attracted a lot of foreign business owners.

Plus, with the growing number of Estonians heading around the world to travel, study and work, more and more are finding non-Estonian partners and when they head back to Estonia, of course their partner goes with them.

I had a great relationship with the locals. Working in a hostel, you tend to work mostly with travellers and all your friends were fellow expats who lived in the hostel and you have only a few local friends. Thankfully, I broke out of that way of life, and when I began working in the bar I discovered a whole new appreciation and love for Estonians.

I think I was probably a novelty for Estonians over there. An Australian guy who loved Estonia and who was working in a bar that wasn’t set up to attract purely tourists like so most others. Plus, I was trying to learn the language. Thousands of times I was asked “Why are you here? I would never leave Australia.” It was very strange but over time I became really close with a lot Estonians there and when the day came when I had to leave the country, I was really touched at home many people were upset by it and came to see me off.

I loved the people most of all. Estonians seem to think of themselves as cold and unwelcoming, a people who never smile and never talk. I found this to be the complete opposite of how Estonians really are, at least the younger generations. Sure, occasionally you met one of the stereotypes but for the most part, they are an amazing, warm and welcoming people. And of course, you I loved the culture, the history, even the crazy language of Estonia. And of course you can’t look past the city of Tallinn itself. It’s a crazy mix with the medieval gothic Old Town, surrounded by Soviet mass architecture and early 20th century wooden buildings. Walking through the Old Town was like living in a fairytale.

Knowing that it would be near impossible for me to stay there on a more permanent basis and knowing that someday I would have to return to Australia. Trying to find a way to stay there was the hardest part and it took a huge toll on my mentality at times, my personal life, my professional life and my wallet. But Estonia had always felt more like home than Australia ever did to me so I explored every avenue and ended up establishing my own business to qualify for a business permit which would also grant me residency. It was a long and seemingly never ending battle, and it was a battle I ultimately lost, but it was all worth it and am prepared to go through it all over again if I can settle down and create a life there.

When travelling, prepare for the unexpected because you never know when you will find that one place where you suddenly realise you want to create a new life there. I was only supposed to travel for three months and stay in Tallinn for the weekend. That time ended up being five years.

I simply played it by ear as I went along and whilst it made for an amazing experience and I certainly have plenty of great stories to tell. However, it did also create a lot of stress and cost a lot of money. I was never prepared to stay long-term and before I knew it I was living illegally in the country.

Trying to cross-boarders and eventually applying for visas and residency made me a bit paranoid about it all. And that stress took a toll on just about ever aspect of my life.

I am heading back to Estonia. I plan on being there by March 2014 at the latest. I made a promise to a friend that I will be there for their birthday and I will keep that promise. In the meantime, I am working back here in Sydney just trying to save as much money as I can. I hope for the best when I get back there but am expecting the worst and so the money will be vital in case I can’t find work as easily as I did last time. I have also been tossing up the idea of doing some volunteering work in Africa or some travel in before heading back but at the moment, earning money has to be the priority.