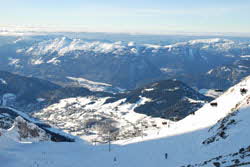 I’m April Hollands, originally from Melbourne, Australia before spending a few years in London, then flitting between the French Alps as a ski bum in winters and working two jobs in Cambridge to pay for the luxury, then finally moving to the French Alps permanently and finding work.

I moved to London back in 2000, telling my mum I’d be back in a year and to look after all my belongings for me. By 2008, my dad made me sell my piano and my mum had a spare room! I’ve moved ten times in ten years. By the time I moved to my current location, St Jean de Sixt, in November 2009, the whole process of moving had become a habit. I left Australia because I wanted to explore the world before I settled down with someone. I left England because I fell in love with the snow in the French Alps. I went back to England, gained citizenship and a passport, and came straight back to France.What challenges did you face during the move?

For the move to England, the toughest thing was realising that speaking the same language does not mean the transition will be easy. Different administrative processes, personal space and different words (thongs, pants are both items of underwear in the UK and outerwear in Australia) were all challenging to come to grips with. For the move to France, the language was by far the biggest challenge — and remains so to this day. Paperwork comes in a very close second.

Most of the properties I’ve lived in have been found through online listings or through notice boards in ski resorts. Only two of three places I’ve lived have required my signature, but all have required at least one month’s deposit. Most have been furnished, which makes life easier for those with itchy feet. My partner and I moved into an unfurnished place, so actually owning the couch I’m sitting on is a novelty. Between the effort of furniture moving and owning a cat, Bruno, who I inherited, I imagine we’ll be rending this place for some time.

Around the Aravis, it seems as strong as ever, with old barns going for ridiculous prices that nobody but the foolish can justify buying

I’m self-employed, and I was very lucky to find employment immediately. I couldn’t speak much French, but that’s okay because my ongoing contract is working for someone who is English. I’ve done some work polishing up English text for some French businesses, but that work is harder to find.

Yes, there are loads. There aren’t as many in the Aravis as there are in the bigger ski resorts or in nearby Annecy, but there are still plenty. I don’t know half the expats here. I think most of us blend in with the French-speaking community, so there are lots more social circles than just the expat circle. Having said that, I’m still part of an English-speaking book club.

Well, there are two levels of locals here. There are the true locals, whose families have at least three generations in the local cemetery, and there are the ‘new locals’ which includes everyone else who has been here for more than a few years—French or otherwise. The true locals have their own community that involves favours and a preference for using other local businesses over any of those non-locals. Of course, there are exceptions, but many of my French friends believe they will live and die as outsiders if they stay in this region. Frankly, I’m used to it, and happy to be left to do my own thing. Of course, I know some of the true locals, but my friends here are mostly the new locals, both French and ‘foreign’.

The snow is what drew me here. Snow in Australia is wetter and the weather less stable. I experienced a whole new level of powdery snow on my first visit to the French Alps and I knew right then that I had to live here. What surprised me most when winter was over and I spent my first summer in the Alps was just how amazing they are all year ’round. The lifestyle is fantastic, with lots of sports on offer, such as mountain biking, walking, climbing, swimming in the nearby Lake Annecy, along with wakeboarding, windsurfing and sailing, cow-gazing, paragliding, high ropes, and even a new ‘Bun-j-ride’ for those who like the more extreme thrills. And when you’re worn out from all of that, you can sit back and relax with some local stodgy food, which mostly involves cheese, potatoes and meat. What’s not to love about that?

I really dislike the xenophobia that’s still very obvious in these parts. Maybe the woman in the shop was honestly out of 10c pieces yesterday, but she must have also been out of 5c and 2c pieces to give me ten 1c pieces in my change. Same with the guy who always gives me a hot chocolate in a paper cup, while my French friends get theirs in glass. Sometimes you just have to shrug and hope they one day have to experience how awful those experiences can be.

Don’t be afraid to launch into a new life without a plan. Things work out or you find ways to make them work. Always have enough cash for a back-up plan, of course. It’s possible if you want it badly enough.

As you might have guessed, I’m not big on plans! My only plan for the future is to attempt to get some novels published just to prove to myself that my fiction writing as as good as my day-job, non-fiction writing.