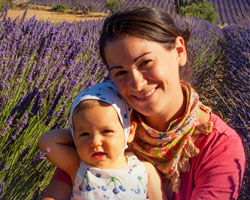 A whirlwind of emotions flowed through me the moment I saw the positive sign on my pregnancy test. An American living in France with my French husband, I should have been mentally prepared for this moment. Excitement quickly washed away when it occurred to me that I knew nothing about giving birth and raising a family in France.

After meeting my husband while on vacation, we lived together in the US and Canada before we returned to the land of romance. I dreamed of running through lavender fields, wine tasting at vineyards, and exploring deserted castle ruins. Our adventure began in Marseille. Besides visiting touristic sites, we also explored Provence’s countryside. We visited large cities and small villages, and even found castle ruins secluded on top of a hill in Cadenet. One of my favourite memories is when we climbed to the top of a cliff that overlooked Marseille and the Mediterranean Sea, and had a picnic up there of different pastries from the bakery.In order to improve my French, I decided to take French courses at a university. We moved to Bordeaux so that we could experience life in a different region. The next six months were heavenly. Days were spent learning a romantic language, socializing with students from around the world, and exploring this culturally rich city. Nights were spent sipping red wine and writing business articles. Not at the same time, of course.

We wanted to explore the world, not settle down. As soon as I gave my husband the news that I was pregnant, I glanced up and saw the largest smile sweep across his face and his green eyes sparkle. And then it occurred to me that this doesn’t mean we have to slow down, it means that now we have someone special to share all of our adventures.

We moved to a tiny rural village only fifteen minutes north of Caen in Normandy so that we could live near my husband’s family. Nothing was within walking distance, and I was unable to drive our car. My husband insisted on buying a manual transmission despite knowing I could only drive automatic cars. His family was always over, and if I tried to work, I was considered rude. Miscommunication led to misunderstandings, tension, and resentment on both sides. Within a month, I drifted into depression, and the doctor put me on a month of bed rest because I began dilating too early.

I went into culture shock. I missed home and wanted to be surrounded by family, understand everyone around me, and run to Dunkin Donuts. I even searched online for the nearest Dunkin Donuts (Spain) and if Ritz crackers were sold in France (not yet). I wanted to make friends, get out of the house, and be around familiar things. Memories of Marseille and Bordeaux lingered as a distant dream, and I feared that our lives would never be the same again.

My daughter was born on her due date. I have mixed emotions about my experience giving birth in France. Overall, I feel that France has a superior medical system to the US and that I was in very good hands. It would have been perfect had I not been pressured by three doctors to have a cesarean without there being an emergency (they figured I would end up needing one, so it was better sooner than later) and told that my body was not capable of breastfeeding. I ended up giving birth to my daughter without surgery, and I’m still breastfeeding. Yes, I’m stubborn.

Black mold infested our house, making the three of us sick. I was tired of the rain, grey skies, and fights about how much time we should be spending with his family so he agreed to move to Provence. We found Banon, a small village of 1,000 people and known for its goat cheese. The house has a balcony overlooking fields of grain and lavender and is only a five minute walk from cafés, restaurants and stores. Living in Provence has been like stepping in a fairy tale. The sun shining, rolling hills and wild flowers springing from ancient stone walls, isolating us from the outside world. Not only did our relationship thrive again, our visits to see his family became enjoyable to a point that I now look forward to seeing them again.

Moving to France was simple. Starting a life here was the ultimate challenge. After living in France for almost three years, I feel at home. I know where to buy what I need, and what everything I want is called. I grocery shop with my daughter each week at the marché, jog down scenic trails and read on my balcony overlooking the countryside. We socialize with our neighbours, enjoy long walks, and fill our lungs with fresh air.

The French have been very welcoming to me, and I have met such generous and patient people, especially as they suffer through me butchering their language. Our life has not slowed down. We visited Spain while I was pregnant, and travelled with our daughter to the US, UK, and Italy. We’re going on a road trip next month to Switzerland, Germany, Austria, and Czech Republic, plus saving to go on a round-the-world cruise in six years.

Moving to France was the greatest adventure of my life, and I’m so thankful to have had this opportunity. I have learned that life does not always go as planned, and as I watch my excited daughter on the London tour bus, I am thankful for this.

Read more about Carrieanne Le Bras and her adventures being pregnant and raising a family in France on her French Mamma blog. You can also find her Pregnant in France book on Amazon as a paperback and for Kindles, as well as in any major bookstore. Next book will be released summer of 2013.