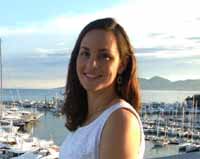 Hi, I’m Chrissie, an Australian living and working in Nice, France. Like many of my compatriots, I headed off to discover the world upon completion of my university degree and ended up here in the sunny South of France. That was back in 2007. When I first arrived I was offered an administrative position with an English company who supply fine wines to the super yachts which invade the Mediterranean each summer. I’ve been there ever since, and thanks to further training (and dedicated tasting) I now have a very fulfilling wine sales role.

It all started in 1998 when I’d just finished high school. My big sister was already living in Nice and suggested I defer university for a year.Instead I could come and live with her and enroll in an intensive French course. I didn’t need much convincing! I fell in love with Nice straight away and always hoped to return at some point. When I finished university I travelled on and off for about 18 months before ending up back where it all started! It helped to have family around, although my sister has now returned home to Australia after 20 years here. I also have a French passport, thanks to my mother, which I’m more than grateful for. Without it I would never have been able to stay.

I guess I was lucky as I left Australia in my mid-twenties with only my backpack and a desire to see where the wind took me! I didn’t have to worry about moving a family and issues such as finding schools or appropriate housing. A return ticket to Australia was booked so I knew that if my new life in France didn’t work out I could simply use that ticket to head home. I still don’t know how, but somehow I found a job and a room in a flat share within a week of arriving in Nice. I haven’t looked back since!

I’m now onto my fourth apartment since moving to Nice! The first two were found through the major English language website here called AngloINFO. I still recommend this website to all new arrivals to the Côte d’Azur since, as the largest online English speaking network, there’s a wealth of information to be found through it. Not only can you ask any question on the discussion board, but classifieds are posted offering everything from employment to cars and furniture.

This was perfect when I first arrived as I could liaise direct with an (often) English speaking owner for a short term accommodation agreement.

My most recent two apartments have been through rental agencies. Whilst the paperwork is definitely more complicated, I prefer having a proper lease and find there is a much wider choice of rentals available. It’s a personal choice, however. I know many long term expats who prefer to not rent through an agency.

Nice, and the South of France in general, is full of expats! So many, in fact, that sometimes you can forget that you are in France and go days without speaking the local language. Between Sophia Antipolis, found in the hills behind Cannes and nicknamed Europe’s Silicone Valley, and Monaco, there’s a real international community here.

Without forgetting the yachting industry, one of the most important employers along the Côte d’Azur and whose numbers swell in summer thanks to the influx of (mostly English speaking) yacht crew into the ports along the Riviera. Sometimes Antibes feels more British than French.

Very good! No matter what their reputation, I find the French France generally warm people. Admittedly, it helps that I’m from a country which fascinates them. Australia is so far away, so foreign, that I’m always enthusiastically quizzed about it when people find out my nationality. Saying that, one question I’m asked without fail is why on earth I would chose to live in France when Australia is home!
Speaking the language definitely helps and it would be different if I made little or no effort to communicate in French. Just like we find French accents appealing, they adore the sound of their language spoken in an ‘English’ accent!

Even after seven years, I still pinch myself that the Italian border is a mere 40 minutes away from Nice. To be able to pop to another country for afternoon gelato is such a novelty as an Australian. We’re also lucky to be home to France’s second largest airport, a gateway to much of Europe and beyond. Travel, therefore, is easy and affordable.

I often think Nice is a smaller version of Sydney, my hometown; both cities draw upon the ocean and coastline for so much of their identity. I have a sweeping view of the sea from my apartment; I doubt I’ll ever tire of the different shades of blue I can see when looking out towards the Baie des Anges and beyond.

Like Sydneysiders, the Niçois embrace the outdoors and the Promenade des Anglais is the focal point. I’ve started running since moving here, since it was simply too hard to justify not doing so when you’ve got such a picturesque stretch of coast as a backdrop! Lucky the winters are sunny and mild. There’s a lot to like about life in Nice.

A common complaint I’m sure, and one which goes with the territory, is transiency. It’s so easy to make friends within the expat community, however the very nature of it means that people come and go with amazing frequency. Contracts finishing, homesickness, and visa issues are just some of the reasons why your friends will one day announce that they are moving home, tomorrow! I’ve met some great people since living here, however there are probably only five or so among them who were in Nice before me. Thankfully they also have no intention of leaving.

I’ve also struggled with the concept of ‘home’. Australia is still very much home, however France is also home as well. It took me a few years to realise that I am allowed to have two homes, and that I will never have to give up one for the other! I’m no stranger to homesickness and often question if I’m doing the right thing by living so far away. I don’t know if I’ll ever know the right answer. All I know is that I wish Australia was an island in the Mediterranean which I could visit more often!

Definitely make an effort to learn the language! Too many expats here put no value on knowing French. Living in a foreign country is the best way to master the local lingo, so take advantage of being in one! It may be a struggle since everyone, especially in Nice, speaks English, but there’s such a sense of achievement in understanding your first movie in French or being able to open your own bank account. Otherwise, in many ways, you’ll always stay at the edges of the culture you’re living amongst.

Also, don’t expect everything to operate like it does back home. You’re in a different country now, with a different way of life. Keep a positive outlook and don’t let the French way of doing things frustrate you (it easily can). Put it down to the cultural learning experience!

Well, in a textbook example of expat romance, I recently got married to an Irishman that I met here in Nice. In an Irish bar, of course! A middle school teacher at one of the region’s international schools, Keith, like me, is more than happy with his life here. We both agree that it would take a pretty impressive job opportunity to see us even contemplate leaving the South of France.