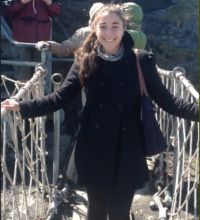 Hi everyone! I’m Cora! I’m from Melbourne, Australia and currently live in Cambrai, France; a small city an hour outside of Lille in Northern France. I keep up a blog called “The adventures of an Australian girl in France” where I talk about my travels, daily life in France and give advice on living abroad and the English teaching assistant program. I also post videos on Youtube about expat life and take you along with me on the trips I take.

I went to France because I studied the language in high school and I had always loved the idea of living abroad… and France seemed liked the perfect place to go! I finished my university degree in July 2012 and was a little unsure about what I wanted to do next.Teaching had been something that I might like to pursue so, when I came across the English teaching assistant program in France, it seemed like the perfect thing for me- a chance to live abroad and to get a taste of teaching. I applied for the program and was lucky enough to be accepted. I moved to Cambrai in September 2012 as an English teaching assistant which involves teaching English and sharing Australian culture and way of life to French high school students.

I guess the most challenging thing about the move was the fact that I didn’t speak French well enough to have proper conversations with people and express exactly what I wanted in day to day situations. This was difficult because you don’t realise how much of yourself is expressed through language and communication and when you don’t have that option it makes it hard to make friends and to just be yourself.

With the help of a teacher at the school I worked at, I was able to find an apartment through an organisation that accommodated young workers in the area. I was really lucky because someone was leaving the apartment just a few days after I arrived in France.

Everyone I’ve met here has been really nice… it’s exactly like the film “Bienvenue chez les ch'tis“. You get to the North of France and the weather is horrible and you don’t know anyone and then steadily they start to welcome you and by the end you really don’t want to leave! Like the quote from the movie says: “A visitor cries twice up north: once on his arrival and once at his departure.”

What I like most about where I live is that life is much slower. When I first arrived I used to hate that everything was closed on Sundays, but now I think it must be great to be able to spend time with your family and friends relaxing, rather than running errands or working. I also like the small town vibe- of being able to walk to friend’s places really easily and going for walks in the park.. I guess all the small things. I also like all the cliche French things- I’ll never be able to eat any other bread and I’m in love with French desserts!

The thing I dislike the most is having the ‘expat’ title… as always being known as ‘the Australian girl’ or ‘the English speaker’. It’s fine most of the time, but there are days when you just want to be like everyone else.. to understand everything and just blend in. Being here has also made me appreciate home, which meant a bit of homesickness, especially in the beginning.

Moving to the other side of the world will be hard but the experience is amazing and everything you get from it will be worth it! You’ll learn to adapt to situations outside your comfort zone which will teach you invaluable life and work skills. ALSO, do as much travelling as you can because you’ll never have a better location! Finally, eat as much baguette and cheese as possible, because it really is the best you’ll ever taste anywhere!

Ah, the FUTURE! The more time I’ve spent abroad, the more I think I would love to work in an industry that requires working with other countries and people overseas whether that be through business, journalism or the government. We’ll see what the future holds!

Cora shares more information about life in France through her blog The adventures of an Australian girl in France and on YouTube.