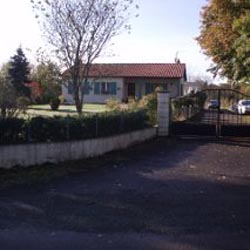 Many many years ago, way back in the 60s, I was stranded in France. The aircraft I was flying in developed engine trouble and we were forced to land and await parts from the U.K. before we could continue on our journey.

The wait and subsequent repair to the aircraft lasted about a week, so we were housed in a “transit hut” on the airfield, but were allowed to wander around the local area. That is when I said to myself…One day I’m going to live here.

Advance now to 2005, I am due for retirement, my wife, Sue, is six years younger so we decide I shall work on until she retires.

I have already started trying to prime her about a move to France but she is pooh-poohing the idea, saying we are staying here in the U.K.Like most long time married men, I usually back off when the other half decides any ideas not to her liking are to be rejected, but I was determined. Eventually she came round to my way of thinking, saying that she wanted a “bolt hole” back in the U.K. – I explained to her that we not only couldn’t afford it, but the ongoing costs would drain our pensions, so it was a case of burn our bridges, moving lock stock and barrel.

August 3rd 2006 we handed the keys to our bungalow over to the new owners, stayed in a local hotel overnight, then moved in a leisurely way towards Dover. On arriving there we were informed that the ferry was going be delayed for at least four hours as they were having problems with the toilet system on board!

We eventually set sail, arriving in Calais at some unearthly hour. It was pouring with rain, most of the citizens of Calais were tucked up in bed and we couldn’t find a hotel that was open so decided to start our way south.

The car, a Renault Laguna, was packed to the brim with the bits we thought we would need prior to the removal van arriving (we were going to stay in a Gite until the people we bought from, moved out). Definately a wrong move. Unbeknownst to us, they had not even started looking for another place, saying that they couldn’t afford losing their deposit on any house should we have backed out on the sale. We eventually moved in on September 29th which meant a very expensive “holiday” whilst we waited.

I don’t know if you’ve ever slept on a tiled floor at the age of 65, with just a tablecloth for bedlinen, but I can tell you it’s not what I would call one of my most favourite pastimes. Sue at least had a lilo for comfort.

We had moved from Devizes, in Wiltshire, to the rural area in the south west of France called The Charente, dept 16 and part of the greater Poitier Charente region. We had spent several “holidays” looking around France, sussing out the areas, and much to my delight, and with a little gentle persuasion, Sue said she loved it here in the Charente (my first choice for years)

The removal firm told us we wouldn’t be getting our furniture for at least ten days. Well, we had the house and apart from a few items of crockery, that was it. Then the neighbours came round.

The “Sou-Sol bungalow”, that is basically a bungalow that sits on top of a cellar, was set in just over an acre of land, half of which had gone back “to the wild” because the previous owner said his “bad back” wouldn’t let him work too much, with a fair sized swimming pool at the side of the house and a huge “veggie” allotment.

We were wandering around, taking it all in, when a “Bonjour” greeted us, it was “Eric”, he started chatting to us at fourteen to the dozen in FRENCH. I stopped him, asked if he spoke English – no, he didn’t. He indicated we should follow him to his house, where the wine and the dictionary came out.

Four hours later, slightly squiffy, and my brain aching from trying to translate, he had our life story and we had his. As we went to leave he told us to wait, called his children, related something rapid in French to them, then escorted us back to our house. Out of the gloom of the evening came the children, carrying two camp beds and various items for cooking in.

We thanked him, what else could we do, and THAT was the beginning of our love affair with France!