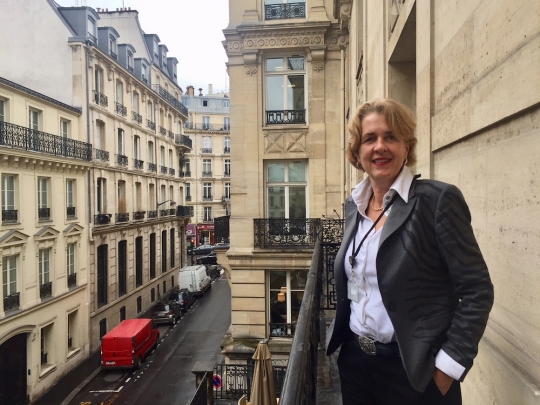 I am Dutch and living in Paris; love playing golf and I am a member of one of the oldest golf clubs in France situated at the coast of Normandy.I work for an originally Dutch company which has a presence in France.

I moved from the Netherlands first for 3 years to Belgium and then onwards to France at the beginning of the 21st century. I moved abroad to follow my love at the time who is French. He had his own business and could not move. Unfortunately we are now divorced.

Language was a big thing! You have to speak French. I had some basic school understanding of French. I was lucky enough that the company I worked for in Belgium sent me to a one week crash course in French in the Netherlands. As my husband was French, I could practice it immediately at home.

Also the sense of feeling lost in such a big city – if you move from small cities like Amsterdam and Brussels, not knowing what metro to take, what is a good hairdresser, dentist etc.

Paris is a very cosmopolitan and international city and there are many expats and more specifically, many Dutch living in Paris. We meet on a regular basis like when the Dutch orange football team is playing, and to watch them and encourage them in a café in Paris.

It is very standard for Parisians to have a house/apartment in the countryside to escape their city lives; we also have one at the coast of Normandy. As my (ex) partner is French, I could very easily get in touch with the French locals. After the divorce, I stayed in touch and I still tend to go there every weekend to get away from the busy city life.

The high quality of food and living; there is a ‘joie de vivre’; France is also a very good place to go on holiday. It has great variations in countryside. I love their lunches and dinners, which take hours, with good talk and good wine.

You live far from your friends and family.

The time taken for eating; it is a time of reflection and of enjoying life. The French love to discuss politics as well during these dinners. This is not always easy to follow. My biggest struggle at the beginning was to stay awake during their long dinners. A dinner starts around 8/8.30pm. you have to take into consideration that they take time to have an aperitif, and by the time you go sit at the table and actually have dinner, it might be 10 pm. I was not used to that. The Dutch eat earlier, and of course I wasn’t used to speaking French the whole evening. The French found this all very funny and I had a reputation for that. Nowadays it is the other way around and I find it not so easy to eat early.

Food is really of high quality. As my (ex) husband likes to cook I learned a lot about the variety in French food and French wine. I didn’t know that there were so many different types of cheeses for example. I was lucky to have a Dutch father who loves and enjoys drinking French wine. I grew up with this appetite for French life.

Learn French! It makes your life so much easier.

I don’t know yet; let’s see what the future brings.

Would you like to share your experience of life abroad with other expats? Answer the questions here to be featured in an interview!