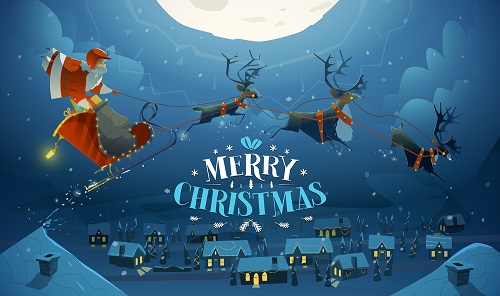 Type CHRISTMAS into your search box and you will see that what we call Christmas today is essentially a pagan midwinter festival, which was adopted by the early Christians to coincide with the (supposed) birth of Jesus. In December, Jews celebrate Hanukkah, their eight-day festival of lights.

That calls to mind a limerick.

“A pious old Jew from Salonika
For Christmas asked for a harmonica.
His wife said to him,
‘Feh, that’s for Goyim’,
And gave him a Jew’s harp for Hanukkah*.”

*Our Jewish friends say, “Chanukah for purists; Hanukkah for the Goyim.”

“The Jew’s harp, also known as jaw harp, mouth harp, gewgaw, guimbard, khomus, trump [I kid you not], Ozark harp, Galician harp, or murchunga, is a lamellophone instrument, consisting of a flexible metal or bamboo tongue or reed attached to a frame.”

Over the centuries, a great many ramifications have been added to what we now call Christmas. ‘Merry Christmas’ seems to have been coined by Charles Dickens in A Christmas Carol, with its description of the Cratchit family festivities.

Because of the Covid-19 pandemic, Christmas 2020 is unlikely to major in merrymaking or indeed public religious observance. Christmas celebrations, from Christmas markets to carol concerts, are, if not cancelled, severely pared down. You know things are bad when you find ads for virtual Christmas parties on the web.

2020 is the 400th anniversary year of the Pilgrim Fathers’ landing at Plymouth Rock. Puritans all, they would have felt at home in locked-down 2020. The General Court of the Massachusetts Bay Colony issued this notice in 1659:

“The Observation of Christmas has been deemed a Sacrilege, the exchanging of Gifts and Greetings, dressing in Fine Clothing, Feasting and similar Satanical Practices are hereby FORBIDDEN with the Offender liable to a Fine of Five Shillings.”

Most people blame Oliver Cromwell for outlawing Christmas celebrations in England, but as early as December 1643, long before King Charles I lost his head, an ordinance was passed encouraging subjects to treat the mid-winter period with:

“…the more solemn humiliation, because it may call to remembrance our sins, and the sins of our forefathers, who have turned this feast, pretending the memory of Christ, into an extreme forgetfulness of Him, by giving liberty to carnal and sensual delights.”

From this point until the restoration of the monarchy in 1660, Christmas with its “carnal and sensual delights” was officially illegal. In 1644, another ordinance abolished the feasts of Easter and Whitsun too.

Here in the Morvan, the lockdown (le confinement), combined with travel restrictions, has kept visitors away from Charity Cottage.

Charity Cottage? Thereby, as the Bard says, hangs a tale. In 2005, we emigrated to the Morvan in rural Burgundy. Word got around back in Blighty. John once remarked that if we had chosen somewhere less attractive, only our true friends would have wished to visit us.

Like Bilbo Baggins, we are fond of visitors, but people we scarcely knew solicited free board and lodging on their way to or from their hols further south. They came empty-handed (we aren’t demanding, but a bottle of wine or a pot plant would have been an acknowledgement of the shopping, cooking and laundry their visit generated) and left their room en désordre and their towels on the floor of their bathroom.

Hospitality rules OK – one might, as Saint Paul says, be “entertaining angels unawares” – but I began to consider welcoming invited guests in the main house and putting up the freeloaders in the cottage in the garden. It had electric light and a cold-water tap, but no sanitation. However, it had possibilities…

How we transformed a derelict cottage into a home from home is set out in Murmurs from the Morvan, which we hope to publish one day in aid of Combat Stress. When friends christened our cottage Le Petit Trianon, after Marie Antoinette’s playhouse at Versailles, I had a brainwave. We had no wish to run a commercial gîte. What about encouraging congenial visitors and asking them to donate to our favourite Good Cause? Donations from UK taxpayers can attract Gift Aid, which means that the taxman adds his two penn’orth.

Inevitably, we named our home-from-home Charity Cottage, and I began writing for the Daily Telegraph expat section in exchange for publicity for our pet project. The expat editor, Will Holder, suggested we enter their 2012 Best of British competition – and we won the Best British Charity award! The trophy and certificate are on display in the cottage.

Since then, we have welcomed visitors from Australia, New Zealand, Canada and the USA, as well as Britain, Belgium, Germany, Poland and France. Children and dogs are rapturously received. Some visitors come every year, like the demon drivers from the Rallye de l’Anguison (sadly cancelled in 2020 because of the pandemic). A family of radio amateurs brought their 30-foot (collapsible, thank God) mast. The appreciative comments in the visitors’ book make gratifying reading.

Every year, I inflict a Christmas story on our friends and family. We hope to add the 2020 story to the Charity Cottage website.