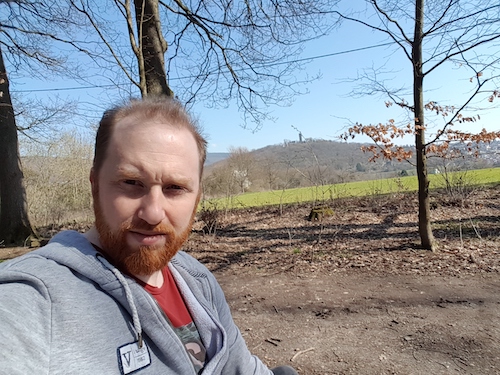 My name is Ash Grey and I am a 34 year old stay-at-home dad from Carmarthenshire, South Wales in the United Kingdom.

I moved to Konigstein in Hessen, Germany in late March 2019 with my German girlfriend and our daughter. We moved for several reasons. My girlfriend had been stuck in a very stressful job dealing with debt. The long hours bad working conditions and depressing nature of the job were affecting her mental and physical health and causing a lot of friction between us.My girlfriend is a qualified orthodontist in Germany but the British Dental Association had made it very hard for her to get her qualifications recognised in the UK and even if they had the number of such jobs in South Wales is not high, especially in the Ammanford area where we lived. Recently she inherited a house from one of her relatives and we decided to move there so she could go back to being an orthodontist, they were eager to have her back. Also she had told me that the education system, healthcare and jobs were much better in Germany so I thought it might give my daughter a better start in life and give me some more opportunities than I would have had in the UK.

I think money, distance and downsizing were the main challenges of the move. My girlfriend had to work a lot of overtime to afford the move which was a lot of stress. I had to pack up the house while looking after my daughter which was rather unpleasant and I felt a lot of stress about fitting everything into the budget van that we arranged to move our stuff, a lot of which was my book collection. I also put my house up for sale which was somewhat depressing and added further stress.

We sold a lot of furniture and a few other things to try to reduce the amount we had to move. My girlfriend accidentally told me to throw out the wrong bags of her stuff and so she lost some of her personal things which really did not help. As it turned out the van was bigger than expected and that all went well despite my worries.

We had decided, after some chopping and changing, to drive both our cars to Germany. My girlfriend took our two guinea pigs and I took our daughter. We stayed overnight with one of her relatives in Sussex and then drove to the ferry in Dover the next day. The ferry was late and I was very nervous about driving in Europe for the first time. As it turned out the driving was a lot easier than I had imagined and most of it went well. But the five-hour drive was very tiring and my daughter got very upset for the last couple of hours, at which point my sat nav also had a tantrum and that was thoroughly unpleasant, but we made it to the new house eventually.

The next day I unloaded the van and we spent most of the day unpacking, which turned into more fights with my girlfriend. Her mother who lives downstairs (there are two flats in the house and we have the top one even though my girlfriend owns the house) was there a lot which added to the disruption.

The first week was mostly just stress and worry and was thoroughly unpleasant. We were supposed to get lots of things done in the first week as my girlfriend was starting work the second week. But when we went to the Rathaus in Konigstein we ended up dealing with someone who gave us misleading information. We ended up having to translate documents, some of which were not necessary or accepted and ended up waiting a week for them after they were done incorrectly the first time.

We also had to get our cars registered but could not do so straight away because we needed to get Certificates of Conformity (COC) for them, which are not normally supplied in the UK. As I write this three weeks later we have only just been registered, they were much nicer this time although that could have something to do with the complaints my girlfriend raised. I am still waiting for my COC and my girlfriend is struggling to get the mechanic to answer his phone. We also only just got our German bank accounts which was made more stressful than necessary by my girlfriend freaking out about the stress of driving.

The language is a bit of a problem because I only know a few very basic bits of German and so I need my girlfriend to translate or talk to anyone who can’t speak English or who needs to discuss anything technical.
Our daughter was very unsettled for the first week or so and was not sleeping well. She also caught a tummy bug and a cold which added yet more stress.

We are still settling in and have not really socialised with the locals, although many seem friendly. There are supposed to be groups on Facebook for expats which I might try to use to meet some other British people but so far I have not done so.

I like living next to a forest and some of the shops here seem very good and offer a lot more than local ones in the UK. So far I have not had much chance to appreciate much of my new environment.

I don’t like being so far from my parents and my sister. Not knowing anyone here is also hard and communication is difficult if people don’t know English. I think I also need to have more conversations with German speakers to get a better grip on the language.

I have not really noticed any outstanding cultural differences from the UK. It’s more noticing small things, like Spargel stalls everywhere and bakeries in hardware shops. The buildings are noticeably different, from concrete block apartments painted to be slightly less depressing to really nice old Fachwerkhäuser. Germany also seems a lot more multicultural than the area I come from. Other differences I am aware of more indirectly such as the lower number of children, silent Sundays and the obsession with work.

The food and drink is not jarringly different. I can still cook mostly what I used to but I do see a greater variety of things like sausage and cheese. There also seem to be a lot more organic shops and a wider variety of international foods. The takeaways seem a little better than at home and more numerous, although personally I prefer to cook. I liked sauerkraut before I moved but have seen little of it around but I bought kraut salat which I was not too keen on. Otherwise I’ve not really noticed anything outstandingly nice or unpleasant so far.

My advice to anyone would be to ensure that they have a job lined up before moving, learn the language or have a friend that you can rely on to translate documents and any official meetings for you, maybe take a holiday in the area you are moving to first so that you get a feel for the area, make sure moving your stuff is as organised and painless as possible. If you don’t need your car just fly over as it would be much easier.

In the future I probably won’t have much time to myself until my daughter starts Kindergarten but I am thinking of trying to do some craft related stuff, maybe get trained as a hunter and see if I want to make good use of the free education system to finish my degree and maybe learn some more things.