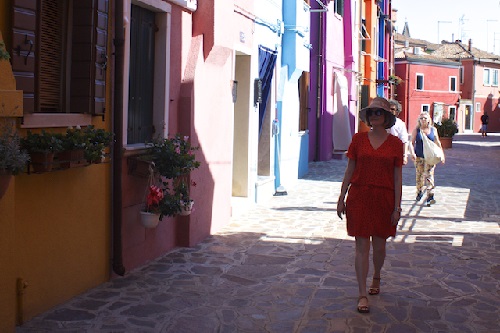 I’m Cheryl Howard, a Canadian from Toronto who’s been living in Berlin, Germany for about five years or so. By day, I work as an Agile Coach for a tech startup and by night, I work as travel blogger at cherylhoward.com where I write about travel and expat life in Berlin.I also co-organize the popular meetup group Make Friends in Berlin, with more than 5,000 members.

During the fall of 2010, I spent a month touring Italy and later on Hungary, the Czech Republic, and Austria. Like countless others, I fell in love with the European lifestyle, and vowed that I’d move there someday. I didn’t know where and I didn’t know when, but I knew it was something I just had to do. As much as I loved life in Toronto, I felt it was time to try something new. Shortly into the new year, things started to fall into place and by June 2011, I’d moved to Berlin, Germany where I stayed for 18 months.

For personal reasons, I returned home to Toronto in November 2012. While it seemed like the right decision at the time, it didn’t take me long to realize that leaving Berlin was a big mistake. I was completely heartbroken and missed it so much that it hurt. I worked hard to make my dream a reality again, finally made my way back to Berlin in November 2014, and I’ve been here ever since.

The first time I moved to Berlin, I didn’t really experience many challenges before or during the move. For example, I applied for and obtained my youth mobility visa in Toronto before I left. I found an apartment online and signed a short-term lease for it before I left as well. The bigger challenges came after I arrived as I’d never even been to Berlin before. I came alone, didn’t even know the language, or have a job. Looking back, I think I must have been crazy to move halfway around the planet like I did without a real plan or any outside help. It was a miracle that I made it (it was never an easy path), but somehow I fumbled my way through German bureaucracy, found employment, started to learn the language, and met a slew of new people.

Yes, there are tons of newcomers in Berlin from all around the world. I sometimes even think that there’s too many of us (and some grumpy locals would tend to agree). Much like Toronto in this respect, the presence of an international community makes it easy to meet new and like minded people.

I miss Toronto a lot, but Berlin feels much more like home. It’s not the easiest place in the world to live but there are plenty of aspects which make it an appealing place to base yourself.

I love that it’s so international and multicultural, which has played a large part in making me feel at home here. And as much as I complain about my commute to and from work, I like the efficiency of public transit and not needing to own a car like back home in Canada. The biggest and most obvious draw for a travel blogger like me is that Berlin offers ample travel opportunities to other parts of Germany and Europe on the cheap.

I’ve been in Berlin long enough now that the “honeymoon phase” has long since passed. While Berlin is going to be my permanent home for the foreseeable future (perhaps for the rest of my life), I no longer wax poetic about how great Berlin is to everyone I know.

Berlin’s a tough city to live in. For most of us, our life isn’t one big long hedonistic party like you may read about in foreign publications. For example, it’s almost impossible to find an apartment, dealing with visa issues is stressful, and establishing long lasting and meaningful relationships is hard whether it be for friendship or romance.

There are plenty that I can think of, but I find the contrasting attitude towards nudity one of the funnier cultural differences. It’s not uncommon to strip naked in front of your doctor without him or her leaving the room or go naked at the German spa.

I’ll be honest, German food is not my favourite. Give me Italian any day! However, I do have a weakness for a good schnitzel with bratkartoffeln (potatoes with a bit of speck and herbs). I also love the purity of German beers.

I’m not at all fan of currywurst (a sausage drenched in curry flavoured ketchup).

This is a bit of shameless self promotion, so I’d suggest to anyone thinking about moving to Berlin to check out my Berlin guide. It’s full of articles about how to make friends, find a job in Berlin, learn German in Berlin, and more.

I have absolutely no idea! I sometimes think I’d like to move home to Toronto or start a expat new adventure in another country. Other times, I’m not sure if I’ll ever be able to leave Berlin.

You can keep up to date with Cheryl's adventures on her blog.