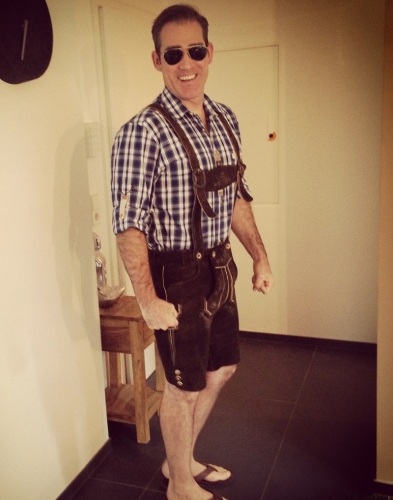 My name is Jim Geren. I am originally from the U.S. state of Vermont.

I moved to Bad Mergentheim, Germany in 2013 from Colorado Springs, CO with my then girlfriend (now wife), Eve, and our two dogs, Buster and Wilson. Mergentheim is Eve’s hometown and we visited in 2012 during the two weeks between Xmas and New year.Aside from the fact that I felt quite at home during New Year (Silvester) as the normally reserved and cautious Germans go completely bonkers and set off more fireworks than we Americans do on July 4th, I immediately fell in love with the country and its history. America just doesn’t have the history that Germany does. Even if you go to a Medieval Times theme park to get a taste of European history, the foam-constructed castle (and the availability of a vegetarian meal), hardly screams authenticity. Can you imagine some surly 13th century knight sitting at a banquet table, fresh from battle and still wearing his blood-stained chain-mail, saying to the cook, “Dost thou haveth any tofu”? Me neither.

There were a couple. The first was selling (essentially giving away) everything that we couldn’t repurchase from IKEA via garage sales and Craigslist. This was no small task as our mattress alone weighed about 5,000 pounds and I was, of course, obliged to help. And by help, I mean helping to convince the buyers that the red stain was only wine and that no one had been murdered on it. The second challenge was getting our two (very large) dogs into the airport, with their crates in tow, and then trying to hold them back while standing in line as they gleefully licked anyone that was unwise enough to get too close.

Fortunately, finding a place to live was the easy part. Eve’s parents had an apartment, complete with private garden for the dogs, ready for us when we arrived. We stayed there for a year until we moved into our house. Aside from the financial aspects, the buying process was only slightly harder, mainly because we had to decide on which house to purchase: The extremely large house with roughly 5 million steps that was way too cheap to be anything but trouble, and the fixer-upper that was nearly perfect. We chose the fixer-upper. We found out that the original structure was a shephard’s house built in the 1800’s, as evidenced by the wagon wheels and ox yoke in the Gewölbekeller, the huge sloping yard, and the stone watering troughs strewn about the property. Naturally, we’re thinking of getting some sheep.

There are quite a few. Mergentheim has a population of only around 23,000 and so the handful or so of Americans that are in this area is surprising, especially considering that it’s no where near any military bases. I have one friend in particular (let’s call her Debbie, because that’s her name) who is from Texas and moved here like I did: For love. Well, for that and Schneebälle; Those softball-sized evil confections are delicious.

Strained, probably. No, it’s actually pretty good. After first moving here, I was able to remain rather obscure as no one knew me and I didn’t know the language. However, since I am only one of a handful of Americans in town, word somehow spread and I found that some people already knew of me before we met. As reserved as they are, almost all Germans have a secret love-affair with America, especially with Hollywood. In fact, I was a guest teacher for my friend’s 5th grade class here in town shortly after arriving. She had told her students that an American was going to be visiting them that day. When I arrived, not only did they get the title wrong and call me “Mrs. Geren”, they immediately asked me if I knew any movie stars. I don’t know any, of course, so I lied and said that I did; One must appear cool to 12 year olds or they will rip you apart. On a side note: Matt Damon, if you are reading this, you may be getting a few phone calls from some German middle-schoolers.

Can I cop out and just say everything? Mergentheim is not only incredibly beautiful, it is also the perfect size. It has everything that one could want in a city without being too big. You simply can’t be anonymous in a town of this size, which is both a blessing and a curse. In Boston, for example, you could go around, oh, I don’t know…wearing a medieval helmet while riding a donkey, and if anyone even noticed, it would hardly be worth mentioning; Strange sights are commonplace in large U.S. cities. Should one do that here, however, everyone says “There’s that American again” and you end up getting banned from the local petting zoo.

The obvious things like not being able to see my family, of course, and baseball. And Starbucks. They do have Starbucks here, but they are few and far between and even if you do find one, because of the differences between European and American palates, the drinks have far less sugar and therefore taste very different. I am used to taking a sip of any Starbucks beverage in the U.S. and having it’s contents grab my tongue by the neck and punch my tastebuds into submission with its delicious little fists. Here, without the extra sugar that I am used to, I usually fall asleep while standing in line to order another one. They may as well serve coffee-flavored chamomile tea.

I’ve said this before, but it’s worth mentioning again. Germans stare. Not just a quick glance, but an all out, turn-your-head-to-follow, stare. Evidently it is not considered rude to gape at people here like it is in America. It can actually be so unnerving that one could, hypothetically, steer their donkey into a parked car and set off its alarm. This will not cause people to stare less.

The food in Germany is actually rather delicious. In the States, German cuisine has the reputation for being bland. I can only surmise that this was a myth started by Germans living in America so that there favorite restaurants aren’t overrun by foodie-hipsters looking for the next taste sensation. Knödel, Sauerbraten, Fleischküchle… all of them are delicious. The one thing that I absolutely can’t stomach is a popular entree in Bavaria: Kalbskopf. This dish (that I can only imagine was invented on a dare) is a calf’s head. As in the whole head. I haven’t had it, but I once saw it served to someone while dining outside of Munich. It was like the German restaurant version of that scene from the Godfather, but instead of screaming like Jack Woltz did in the movie, this guy happily grabbed his fork and knife and dug in. I, of course, screamed.

Learn German. Unless you want to be treated like a toddler with Tourettes, you need to learn the language. Since toddlers can only offer a few phrases and are renowned for saying the wrong thing at the wrong time, most adults tend to dismiss them from conversation. This also applies to Americans living in Germany. Take it from me, just because you have learned to say “Ich möchte Eis” (I would like ice cream), and as tasty as it is, it is rarely appropriate. This is especially true if, like most toddlers (or Americans) you confuse Eis with “Eier”. Congratulations; You have just said that that you would like testicles. You will now never be spoken to again.

To learn proper German. I would like to be able order ice cream someday without people giggling and, of course, staring at me.

To read more about Jim's expat life in Germany check out his blog www.anamericaningermany.com.