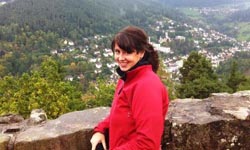 I’m Laurel Robbins a mid-thirty something Canadian expat now living in Germany. In Canada I was in a managerial position at a university. In Germany I am a full time German language student, online instructor for two Canadian universities and travel blogger and writer. Regardless of where I am, I love to travel, hike and scuba dive.

I moved to Germany in July 2010 and am proof that occasionally vacation romances do work out. I met my now German fiancé on a shark diving trip in Cocos Island, Costa Rica. One of us had to move in order for our relationship to continue and as I’ve always wanted to live in Europe, I jumped at the chance.What challenges did you face during the move?

The biggest challenge I faced was ensuring I had the proper paperwork to bring my two cats to Germany. It was a confusing, time consuming and expensive process but well worth it to have my two cats with me. To future expats, I would recommend starting to look into the process of shipping pets as soon as you know you might be moving as it took over two months just to get the rabies results back.

I was fortunate that my German fiancé took care of this for us. “For rent” signs are not common in Germany so you usually check in the Saturday newspaper or internet listings – most of which are only in German. Normally a two month damage deposit is required when you’re renting. Also many kitchens are completely empty, with no appliances or cupboards, so this is an extra expense to be prepared for. If you’re lucky there will be a kitchen intact, but you will likely have to pay for it and negotiate the price with the previous renter. Another consideration about living in Germany is how the apartment or house is heated. Oil heating is common in older buildings but we wanted gas heating so this eliminated some of our housing choices.

There is a U.S. military base in Stuttgart so there is a steady stream of American expats, but Stuttgart is not nearly as international as other cities in Germany. However there are several expat clubs which are a great way to meet other expats.

I’m fortunate that my fiancé is German so I’ve had an “in” with his German family and friends, who have been very welcoming to me. I also have a couple of other German friends that I’ve met on my own through international clubs. Once my German is better I want to join a German hiking club to meet more locals. As with any country, connecting with locals is easier once you have a better understanding of the language.

There are so many things I like about Germany. One thing I enjoy doing is exploring castles and I am amazed at how many castles there are within a one hour drive from Stuttgart. I also love exploring the Black Forest, it’s one of my favourite places in all of Germany. Being from Canada, I also appreciate how close Germany is to other countries and have been to five other countries this year alone – something that wouldn’t’t have happened when I was living in Canada.

Germans have a reputation for being very direct and while I can appreciate their honesty, sometimes I find it too direct for my liking and perceive it as being rude, even though I know that’s not usually the intention. It was for this reason that I put off buying a wedding dress for months – I was too scared of the directness of salesclerks in Germany. Fortunately it turned out OK and I brought alone a tactful German friend to help me with the salesclerk.

I’ve seen a lot of other expats in my German language courses that are miserable and unhappy here. I think the key is to think about what makes you happy before you go and start to formulate a plan for your life in your new country. I’ve always wanted to be a travel writer and moving to Germany was the perfect opportunity to embark on this. As a result of having a new and fulfilling career, it’s been a much easier transition for me than for other expats who don’t feel they are doing anything useful here and as a result feel lost and not sure what to do with themselves and their time. I would also recommend trying to meet other people as soon as possible upon arriving, since making friends takes time and the sooner you have friends, the sooner your new country will start to feel like home.

I’m planning to stay in Germany for the foreseeable future, become fluent in German and continue to explore Germany and the rest of Europe.

For more of my adventures in Germany and Europe please visit my blog Expat in Germany, or connect with me on Twitter or Facebook.