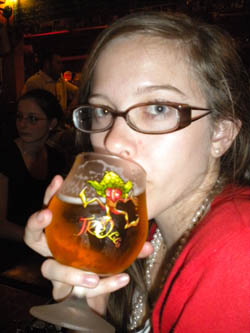 My name is Laura and I am an American girl currently living in Lille, France. Find out more about my life in France on my blog: The Everyday Life of a Young American Girl in France, and keep up with me day to day on Twitter @LauraLaLilloise.

I spend a lot of my time being baffled by the French (including, but not limited to, their culture, food, and language), despite having a handy dandy interpreter in the form of my very own French boyfriend (otherwise known as FBF).

My junior year of college at the University of California in Santa Barbara, I took the plunge and studied abroad in Paris, France despite having taken only one quarter of French before I left. I fell in love with the language and the delicious cheese. Upon my return to UCSB, I decided to continue learning the French language, and graduated with a minor in French.Upon graduation, however, I had no idea what I wanted to do with the rest of my life. I did know, however, that I wanted to live in France again. What could be a better time than right out of college, with no responsibilities to tie me to home? I applied to be an English language assistant through the éducation nationale (France’s national public education).

I was accepted, and was placed in the département Nord-Pas-De-Calais. I’ve now been here for two years, and while there have been many ups and downs, I am so very glad I decided to adventure forth and discover even more of what France has to offer.

I think I faced every challenge there is for a newly arrived expat in France. The schools I had been given hadn’t responded to any of my attempts at contacting them, and one of them was closed permanently. I couldn’t find a place to live. I didn’t speak the language well enough to make friends. I had problems with getting my social security card. I missed my friends and my family.

It was a totally different experience from studying abroad. I had never realized how coddled I was as a study abroad student. The housing issue was taken care of for me by my school, and I had ready-made friends in the form of other study abroad students.

Luckily, I had moved out here three weeks before I was supposed to start working, and in that time was able to get in contact with both my schools. Then the professors there helped me with my social security card and finding a place to live.

Eventually, I made some French friends. My language skills improved and have continued to do so. Then, I went to a New Year’s Eve party with one of my newfound French friends and that fateful night I met FBF.

Finding a place to live in France was definitely a challenge! However, my French friends turned me on to a great site that is sort of like France’s version of craigslist: leboncoin.fr On that site they list (among other things) lots of places for rent.

There are some other expats in my area, but not many. Most expats seem to be British, seeing as we are only a 1.5 hour train ride away from London. I have met a few other Americans, and I love getting to hang out with them and be truly American from time to time. For the most part, though, I hang out with my French friends.

I have a great relationship with the locals. I think this is in a huge part thanks to FBF. He has introduced me to lots of his friends and they are all very nice and welcoming. Also his family has been extremely kind to me and his mother even opened up her home to me while I was searching for a place to live. Lille is a big city (the 4th largest in France) and so as far as knowing your neighbors goes, I have to say that I don’t. But that hasn’t stopped me from befriending French people and really experiencing the French culture.

I love all the stereotypical things about living in France. I love that I get to speak French every day. I love fresh baguettes from my local boulangerie and delicious cheese and wine. But I also love a lot of things that are particular to Lille.

I love the Flemish style architecture found throughout the region. I love that we are so close to Belgium and have more of a beer culture than a wine culture. I love that after our soccerteam, Lille OSC, won both the Coupe de France and the League that we all took to the streets, drinking beer, singing, and chanting together.

Even in France they say people in the North are the friendliest French people, and I have enjoyed getting to know them.

Homesickness. I miss my family and my friends from home immensely. Tickets back home are very expensive, and the flight to California very long (11 hours if you get a direct flight) that I rarely get to see them in person.

I also miss California cuisine. I know that this is probably a shocker because the French are supposed to have the best food ever. I am a vegetarian and it’s been a huge adjustment living in a very meat based culture. I miss restaurants having vegetarian dishes and people who aren’t vegetarian even eating a meal without meat. Specifically, I miss chili, Morning Star Farms fake meat products(especially their faux buffalo wings), pretty much all Mexican food, ranch dressing, and bagels.

Be brave! Don’t give up. I remember how difficult it was in the beginning and I am so grateful that I stuck it out and am where I am today. Also try all the Belgian beer you can. There are so many different flavors that there is going to be one out there for you! Even if you think you don’t like beer.

Ah, THE question. I am really not sure at the moment. I am hoping to continue living in Lille for one more year because FBF has one more year left before he gets his masters degree, and then on to the next great adventure!