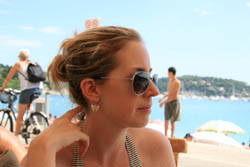 My name is Vicki Riley, I was born in England, grew up in Shakespeare’s county of Warwickshire and moved to Nice in 1999 for 6 months. 12 years later, I’m still here and I write a blog about my everyday life in the Cote d’Azur over at www.nicerinnice.blogspot.com

I moved to Nice in 1999 as part of my degree course. I was studying French at the University of Nottingham and came to Nice to work as a teaching assistant for 6 months.

I fell in love with the South of France and extended my year out by another 12 months, during which I worked in a bar in Vieux Nice (not so different to teaching English to 8 year olds really)I finally went back to England at the end of the second year to finish my studies and graduate. And the day I graduated from Nottingham University I booked a flight back to Nice that same evening and have been here ever since working full time in Monaco.

During the initial move to France, I was quite homesick as I had left most of my university friends behind and while I was in Nice they finished their studies and graduated, leaving me behind. I also had an accident during my first few months here tearing a ligament in my knee which left me on crutches for a few weeks and feeling pretty sorry for myself and far away from home.

In addition to that, I had to deal with the French administrative red tape for the first time on my own, and finding a place to live, setting up a bank account, electricity and phone bills etc were challenges that caused more than a few headaches. In 1999 as a Brit living in France I also had to register for a Carte de Sejour which was an extremely long and complicated process, but luckily the laws changed a couple of years later and I have managed to avoid the Mairie de Nice as much as possible since!

When I arrived in Nice, I initially stayed in a room in the boarding wing of the school where I was teaching (Lycée du Parc Imperial, Nice) It had been arranged through my university so I just had to turn up and unpack which made life much easier for me than it was for most of my fellow teaching assistants. After a couple of months I got fed up with communal living and I found my first studio apartment through a local agency, I think it was the 10th apartment they showed me. My parents acted as guarantors as I was only earning a basic salary and as it was fully furnished I packed my 2 small bags and moved in immediately. I absolutely loved having my own space for the first time and my tiny 30m² apartment on the Boulevard Gambetta saw more than its fair share of parties, visitors from the UK and sunbathing on the balcony. After that first studio, I rented 4 other apartments in the centre of Nice (with friends in the beginning and later with my boyfriend) and in 2008 I bought an apartment with my then boyfriend, soon to be husband!

I think there are more expats in the South of France than the rest of France put together! The Riviera has always been very popular with expats since the days of Queen Victoria and aside from the infamous ‘Promenade des Anglais’ there are lots of clubs, websites and even shops dedicated to Anglophone expats in and around Nice.

When I first moved here I made a lot of English speaking friends through working in a bar and quite a few of us still live in the area.

I also write for a locally based English website called www.FR2Day.com for expats living on the Riviera so I meet a lot of English speaking expats from Scandinavia, America and the UK through that job as well.

Well, I’m marrying a Niçois in September in Nice, so I think I can safely say I have done my bit to promote l’entente- cordiale between France and England!

On a more serious note, it can be difficult to get to know the locals in Nice as they are so used to huge waves of tourists arriving every summer and leaving after a few weeks that they don’t always realize you live here full time.

I have had diabolical customer service in restaurants and shops in Nice despite being bilingual, but overall once people realize I am a permanent resident and not a tourist they are usually pretty friendly and welcoming. I’m the only ‘foreigner’ at the company where I work and my colleagues have always treated me as one of their own from the very beginning as did my boyfriend’s family when I met them for the first time so I’ve been very lucky and was accepted very quickly by my French social circle

I love living by the sea. I grew up in the very centre of England and when I go home to stay with my parents I miss having the beach on my doorstep. I also love the breathtaking scenery of the Cote d’Azur, which has something for everybody from the incredible coastline to the mountains just 1h 30mins away. My daily commute to work (by scooter!) is along the coastal road from Nice to Monaco, 20km of beautiful scenery and sea views, definitely not your average commute!

I also love the food here, there are so many restaurants that eating out can easily become a daily occurrence, and with Italy just over the boarder, we’re spoiled for choice when it comes to choosing a new pasta/pizza dish each time we eat out.

Overall I love the lifestyle I live in Nice, I can go to the beach in summer, ski in winter and be back in the UK in 2 hours to catch up with family and friends.

I very much dislike living so far away from my friends and family, but until my cunning plan to persuade them all to move to the South of France works; I shall continue to bridge the gap over the channel with emails, phone calls and visits home.

I also dislike the cost of living and the lack of well paid job opportunities in this area. We would love to buy a bigger apartment in the same area of Nice where we currently live, but we can’t afford the sky-high prices so we will eventually have to move outside of the city to be able to have a bigger place and a garden.

I would have to say, before moving abroad the most important thing to do is to research the area you’re moving to. When I arrived here for a 6 month placement, I didn’t even think about looking into the job market, cost of housing etc on the Riviera, because I wasn’t planning on staying here permanently but these things are very important. I have several friends who’ve moved to Nice in search of a new lifestyle but who’ve given up and left France after a few months because they can’t find a job that pays well enough to live on no.

Jobs for non-French speakers are few and far between in this area, and even if you do speak French it’s much harder to find a job here now than it was 10 years ago.

The Cote d’Azur has one of the highest unemployment rates in France but living costs and house prices are extremely high, so you need to make sure you can sustain your new lifestyle in the South before taking the plunge.

Also, regardless of where you want to live be it Nice or Timbuktu, I would try and learn at least a few words of the local language before you arrive, because people will be much more inclined to help you and they really do appreciate the effort.

Our immediate plans are fairly simple, I’m marrying my French fiancé in Nice this September, so the next month or so will be a whirlwind of wedding organization and stress!

Once the wedding is out the way we’d like to buy a bigger apartment with a garden somewhere in or around Nice and finally get a dog!

On a personal note, I am hoping to expand my freelance writing opportunities, I currently write for a local expat magazine which I really enjoy, and I’m hoping to write more on my personal blog about our Riviera adventures!

To contact me you can drop me an email at nicerinnice06@gmail.com or leave me a message on my blog www.nicerinnice.blogspot.com

Thanks for giving me the opportunity to be interviewed!