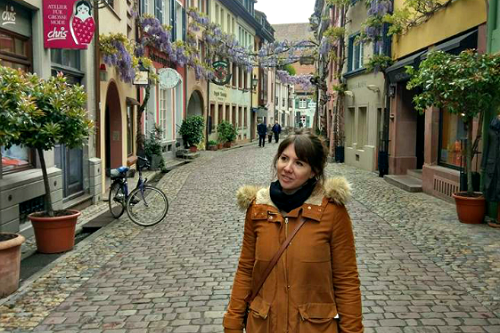 My name is Sarah. I am a British expat living in Bremen, Germany.I work remotely for a UK based organisation.

I moved to Bremen in July 2016 with my partner, Alex. We moved here as he was offered a very good role with an international company that has their European hub office in Bremen.

The bureaucracy involved! Although we were lucky that Alex’s company guided through the process, there were many things we had to tackle along the way. The most simple of tasks like setting up the internet in our apartment was a huge hurdle and very difficult when you don’t speak the same language. Coming from a country that has the NHS, we soon realised how privileged we are in the UK upon learning we had to pay for health insurance, it is rather expensive!

There are many expats in the area, not so many British people though. I find there are many Americans living in Germany. There are various networks and groups to help you connect with other expats.

My life is much more active now. As we live in the city, I walk most places or cycle – Bremen is very cyclist friendly. In the UK I would drive most places so being here is having a positive impact on my health.

On a Sunday most places are closed, which means you can take time to pursue hobbies and catch up with family/friends, rather than getting sucked in to spending money at the shops.

The recycling system in Germany is intense!

I have found meeting people of a similar age and interests has been quite difficult but it would be if I moved to any new city, however the language barrier makes it more difficult.

Language is one of the biggest differences. Although I’m by no means fluent, I know much more German now than I did a year ago.

The difference in language can make it quite difficult to have the most brief and friendly chats with people. Although German people are generally friendly, they are very straightforward in their attitude and that took some getting used to.

I would suggest before moving to start to create social networks. It can be quite isolating if you don’t know anyone and it does take time to build a network of friends so the sooner you start, the better.

I would say go for it though, moving abroad is much easier than you think.

Eventually we will return home to the UK to settle but for now we’re enjoying life where we are and having the opportunity to explore Germany and neighbouring countries.

You can keep up to date with Sarah's adventures on her blog, Girlwithoutsquash, and on Twitter.