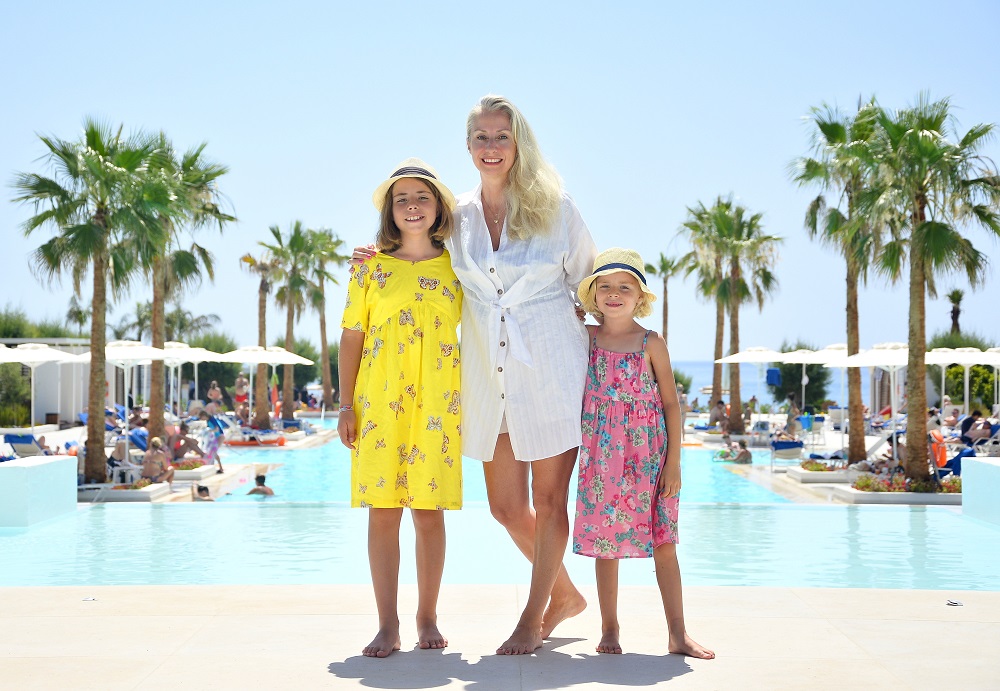 My name is Celeste Tat. I am a Dutch/Italian born and raised in the Netherlands. I live in
Athens, Greece with my family. As a digital marketing freelancer, I write stories about
traveling, moving, and living in Greece for a number of websites and on my own
platform called Family Experiences Blog.

Where, when, and why did you move abroad?

I studied Cultural History at the University of Amsterdam. After obtaining my Master’s
degree in 1998, the university offered me a post-doc project at the Dutch Archaeological
Institute in Athens. There, I stayed in one of the guest rooms of the institute, located
right underneath the Acropolis. That is when I fell in love with Athens. Living in the heart
of (ancient) history, was a dream come true.

When the project finished, I decided to stay in Athens. But I had to find another job, and
that was very difficult in my field. Most cultural institutions in Greece are public
organizations and often have a closed network of favouritism and nepotism. Eager to
work, I switched to the private field and found a good job at the corporate office of the
Coca-Cola Company in Greece. I stayed in this commercial environment until my kids
were born.

Nowadays, it is still hard to have an interesting career in Greece. Job
opportunities are few, and unemployment is high. Unless you have your own (digital)
business or if you are sent to Greece by a foreign employer.

Did you need to obtain a visa, residency permit, or work permit? What was the
process like?

I did not need a visa because I am from the Netherlands. But I was issued a residency
permit. At the time, in 1999, the public services were not well organized in Greece, and
there was a lot of bureaucracy. This is still the case to some extent, although
government services are finally being digitalized. I remember an issue at the tax
registration office. The clerk insisted that I showed a visa, even though the Netherlands
is part of the EU! It took me a while to convince the person that the Netherlands is a
founding EU member!

At the time, my residence permit was given out by the Greek police. It was a large
handwritten carton card with my photo. After almost 30 years, I am still carrying this
card around. This paper became especially important during the Corona lockdown in
Greece, when foreigners had to show their passports and residency permits when going
out.

Renting a house, buying produce from the farmers’ market, or eating out is cheaper
than in the Netherlands. However, energy prices, clothes, and phone charges are
higher. Food shopping can get expensive if you buy foreign or imported products.
Generally speaking, the cost of living is lower in Greece than in the Netherlands.

Before the capital controls and the Greek financial crisis of 2015, this was relatively
easy. It is still possible to open a bank account in Greece, but you will need a tax
registration number (AFM). Many banks will now also ask for additional documents,
such as proof of address (a recent utility bill in your name, for example), a work
contract, or a reference letter from your previous bank.

Yes, there are. Athens features a lively expat community. Typically speaking, you can
find the digital nomads and young professionals in the centre, just as in any other city.
Expat families mostly live in the residential areas of the Athenian Riviera near the beach
or in the greener northern suburbs of Athens.

I find the Greeks warm, open, and social people. And I have always found it easy to
meet the locals and make friends. Of course, it helped that I learned to speak Greek
immediately. Greeks are very hospitable to foreigners and value personal relationships.
These are also important elements in Greek business culture. Third-party introductions
are helpful, as Greeks prefer to work with those whom they know and trust.

I love Greece’s long and impressive history, the climate, the natural beauty, and the
Greek islands. I appreciate the scents and colours in the countryside and in the city and
the healthy local Greek food. Living in Greece is like being on a holiday each day. The
beaches are always near, and so are the impressive mountains. I like the freedom of
being always outdoors and the slower, more playful pace of life. Athens may not be the
prettiest city in Europe, but it has an amazing spirit, art scene, and nightlife. For me, it’s
a city offering some of life’s best experiences.

I always miss my family. Now that my parents are getting older, I find it difficult not to be
closer to them. When my children were born, I especially missed having the
grandparents around (their Greek grandparents have passed away). Thankfully, the
Netherlands is only a three-hour flight away, and it is relatively easy and affordable to travel
back home.

What is the biggest cultural difference you have experienced between your new
country and life back home?

There are many cultural differences between Greece and the Netherlands. The one that
I found most difficult to deal with is the deplorable state of the public system and the
inability of the Greeks to improve it. From the public school system to the social security
network, there are only very small steps of improvement. I also have a hard time dealing
with the treatment of stray animals. This problem is hard to ignore because it is visible
on the local streets each day. Despite many private initiatives for change, there has not
been much improvement in the many years that I have lived in Greece.

Foremost, I would advise anyone to follow their dreams. If you want to live in Greece, I
would advise you to just do it, especially when you are young. Families moving to
Greece need to make sure that they have a solid income and an extra budget for
education. The Greek public school system is insufficient, and extra costs for tutoring or
private school are unavoidable.

I will stay in Greece, but I’ll return to the Netherlands temporarily in order for my children
to experience the Dutch school system for some years. My dream is to buy a house on
a Greek island and spend my retirement there while my children are off exploring the
rest of the world!