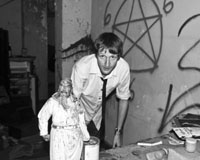 I moved to Hong Kong from Britain in 2005 on a post-graduate teaching programme and settled more permanently in 2007. I work in a primary school now and share my resources at www.tomstefl.com.

I was lucky to find a large flat in an old building. Hong Kong has the most expensive rental property market in the world.Savings can be made the further you live away from the centre, or even by considering one of the 236 outlying islands (though only a few dozen are inhabited). I’ve collected everything I learnt about finding decent accommodation in HK on my expat blog at hongwrong.com.

No, I live in Kowloon’s Yau Tsim Mong district in an area favoured by the elderly and ethnic minority community – it’s not a traditional area for western expats. Expat haunts such as Soho and Mid-Levels in Central, the city’s CBD, are less than 15-minutes away.

HK is a very competitive place and most foreigners find themselves working under conditions and hours which are a lot more favourable than their local counterparts. It can breed resentment in some workplaces, but I’m happy to say I get along very well with my Hong Kong colleagues.

The weather, HK’s Octopus card (i.e. living in a ‘cashless society’), being told “your Cantonese is so good”, after saying two words in Cantonese, never being more than an hour’s travel from anyone, the low taxes, the fantastic travel opportunities around the rest of Asia, HK’s exciting culture of protest and resistance, 24-hr convenience stores, countryside and beaches just a bus ride away and market traders willing to accept any major currency. It’s the capital of capitalism after all!

The weather, the worsening pollution, living in an area with the highest population density in the world and the fact HK is a mono-cultural society.

Expats want for nothing in HK – the cliché about the ex-colony being a ‘blend of East and West’ is true. The only things I miss from Britain, aside from family, are decent bread and cheese, music festivals and tangible copies of my favourite newspapers! Everything else can be found in HK.

Permanent residency. After 7 years of living in HK, foreigners are entitled to apply for a permanent ID card which allows them to work freely in the city indefinitely.

Tom shares more imformation about life in Hong Kong through his blog www.hongwrong.com.