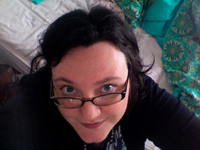 My name is Carse Ramos, and I’m a PhD student in Anthropology and Sociology of Development, focusing on transitional justice and genocide prevention initiatives in the African Great Lakes region. Originally from the United States, I now split my time between Budapest and Geneva. I study in Switzerland, and work in Hungary as a mentor, professor, and legal research fellow with the Academy of Sciences in Budapest. In my other life, I am a human rights advocate and almost lawyer, as well as an avid traveler-adventurer, voracious reader, caffeine junkie, almost lawyer, sometimes writer and musician. I’m also involved in a very complicated long-term and long-distance relationship with New York City, where I spent over a third of my life.Where, when and why did you move abroad?

I first came to Hungary in 2010, during my second year of law school. I did an internship with the European Roma Rights Centre in Budapest and stayed as an exchange student in Human Rights Law for one semester. I fell in love with the city and made many friends here, so I came back last year to do my Masters degree. In prior years, I had traveled fairly extensively and even lived in Uganda for a few months in the late spring/summer of 2008. However, my initial stint in Budapest was my first time living abroad for an extended period of time.

The language! Hungarian is difficult – no way around it. During my first stay in Budapest, English-speakers could be found, but they were not so prevalent. Most of the people that I worked with were from various parts of the Balkans, so I actually learned more Bulgarian and Serbian in my initial months here. Still, I managed to get around (as you do), and in the end I had picked up enough Hungarian to cover most basic necessities.

When I moved back, I was in a world of English-speakers. My university curriculum was entirely in English, and I lived in the dorm with other students. The biggest challenges this time around have involved trying to break out of that pre-packaged small world and reintegrate myself into the city somewhat.

The housing market in Budapest is really friendly for expats overall. I had been in touch with two realtors via email before I arrived, and I had signed a contract by the end of my first day. However, if you have the time and flexibility, I wouldn’t necessarily recommend going this route, as you will often have to pay a realty fee. You can often find much better deals through listserves and word of mouth, and if you are coming here to study, most of the universities have good lists. There are also ample hostels to stay in while you look for something more permanent. However, all of these things take some.

Going through a reality agency at first made transitioning here really easy. This can be especially beneficial if you are under time constraints or looking to sign an atypical lease (under one year, for example). The company you go through will also generally take care of your utilities as well, so you just pay one monthly fee. Everyone working at mine also spoke English, which was hugely helpful. I found my most recent flat through a friend who was moving out of the country.

Yes and no. One of the things that I like most about Budapest is that, outside of the immediate university areas, expats tend to be scattered throughout the city. Most – myself included – live in the inner districts, but there doesn’t seem to be a high concentration in any particular area except for downtown proper. Both my building and neighborhood have a mix of Hungarians and expats, near to one of the major hubs of nightlife, but far enough away to escape the noise and feel a neighborhood vibe. That being said, there is a thriving, active and relatively well-organized expat community in Budapest as a whole that is warm, welcoming, and easy to tap into before you even arrive!

Positive and well-functioning, overall, but language remains a barrier. I speak a lot more Hungarian now, but it still limits my interactions. Also, while polite and helpful, most Hungarians do not come across as the warmest of people. This took me awhile to adjust to, especially coming from the US, where people constantly seem to be smiling to the point of dubious sincerity. (Not so much in New York, perhaps, but there is still a pretty friendly vibe there.)

Budapest is a great place to live. It is a stunning city, with loads to do and a great nightlife. But it’s also affordable. As an expat, you can lead a comfortable life here. You can also get a great apartment for very little. There is an excellent public transportation system, phenomenal baths, and a lot of beautiful green space. The city also has tons of quirky bars. In the summer, everything spills out onto the streets. In the winter, there is hot mulled wine sold nearly everywhere and you can drink it outside. The dynamism is great. I also love the contrast between Buda – with its beautiful hills and patches of life – and Pest – flat, busy, bikable, and bustling. Hungary is also located smack in the center of Europe, so you can get most anywhere with relative ease.

At times I find the politics here difficult to swallow. There is still a lot of prejudice in Hungary, especially in regards the Roma. Also, right-wing extremism is on the rise here, so you periodically see (or wander into) skinhead demonstrations. As my knowledge of Hungarian increases, so too does the complexity of my feelings toward the city.

The other main frustration I have here is produce. I moaned for two years about the lack of fresh and quality fruits and vegetables in the stores. Recently, however, I found some fantastic markets, with wonderful and beautiful produce, but these all but die out in the wintertime.

Try to learn the language – especially if you are planning to stay for a long time. It’s well worth the effort. Also, explore! The city is immediately charming and beautiful, but it takes time to get to know it well. There are tons of hidden gems tucked away in the most random of places. It is a great city for walking around and getting lost. Also, find a way to incorporate the baths into your daily life. They are on pricy end for the Budapest budget, but it is well worth adding this little bit of luxury into your life. Finally, participate! There is a lot going on here year round, with lots of seasonal festivals and treats!

My most immediate plan is to finish my PhD. I hope to be in Switzerland full-time next year. While I love Budapest, the weekly flying gets to be a bit much. Then I will plan to go back to East Africa for a year or so for field research and then back to Geneva while I finish my dissertation. After that, who knows!