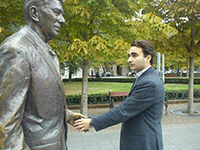 I’m Lee Samaha, a retired investment manager who now runs his own business. I also write investment articles and am working on a book. I’ve lived in various countries around the world and always enjoyed it, so moving abroad was natural for me. I enjoy travelling a lot and have always found that new experiences develop you as a person.. A few years ago, I decided to set up my operations so I could work remotely, and when I was in a position to do so, I set my mind on living abroad.

I first moved to Budapest in 2012, having fallen in love with the city on a short trip the previous year.Budapest is a perfect mix of old-world central European sophistication combined with a vibrant youthful night life. I was looking for a well situated base with which to explore other countries in the region, and Hungary has seven vastly different countries surrounding it. Budapest is an easy city to work and play, and I’ve been able to mix work and travel in equal measure. Meanwhile, I’ve been learning about a new culture and enjoying a beautiful city.

The language can be a problem, but I find that most young people can speak English or German. Another issue is that the Hungarian Forint isn’t a widely traded currency, and you may find your bank is giving you horrific rates when you use an ATM to withdraw Forints. One solution is to use the ATM near the Deak to pull out Euros, and then use one of the many currency bureaus downtown (they give good rates) to buy Forints. Another challenge is that the economy isn’t doing well, and you can see signs of people suffering. I hope us expats are positively contributing in a small way, because I wish this country well.

Finding average accommodation is relatively easy, but it took me a while to find my apartment. I took an initial trip to the city to look at areas that I might want to live. The fifth and sixth districts were attractive to me because they are central and close to the action. They also have good transport links, and are within walking distance of the nightlife districts near the Basilica and in the seventh district. Once I had decided where to live, it was relatively simple to go and see the real estate agencies in the area and arrange some viewings. The apartment quality is variable in Budapest, so I focused on the high-end agents.

I’ve met quite a few and it’s a pretty eclectic mix. Budapest has a large student population with many coming from abroad, mainly because some of the universities teach in English. I’ve also met the usual cast of foreigners working for multi-nationals with operations in Hungary.

Budapest is a very popular tourist destination so there are always holidaymakers here. In other words, ex-pats will find a city that is used to catering to the needs of foreigners. It’s also one of the biggest cities in Europe and tends to attract workers from all over the region.

I’m quite selective over whom I am friendly with, but I have met many welcoming and open people in Budapest. I have very good relations with the locals, and have found them almost universally friendly. They have a tendency to be overly reserved at first, but they nearly always reciprocate politeness, and are very keen to invite you for a coffee and then show you around their beautiful city. Budapest is a typical central European city, and its peoples’ manners reflect a proud and rich history of civilization.

I like the mix of life here. I have a lot of work that I need to co-ordinate internationally, so I appreciate an active city with an all-hours lifestyle. The opportunity to travel by plane, boat or train means I can quickly discover a new city within the surrounding countries. Transport around Budapest is easy, and the city frequently has cultural events. Moreover, compared to many western cities, Budapest has a relatively homogenous culture in which all classes of people enjoy similar activities. I like this kind of feeling in a city.

This may sound curious but sometimes it’s difficult to keep in touch with what’s going on in the city. I don’t understand Hungarian so reading newspapers, watching television or listening to the radio isn’t going to help. For example, I’ve been to parties with a lot of high profile local celebrities, and not had any idea who they were. Another time, Iwoke up one morning and thought World War III had broken out. The streets and shops were completely empty. Afterwards, I found out that there was a march going down Andrassy Ut (the Champs-Elysees of Budapest) and my apartment was within the exclusion zone. The police wouldn’t let me leave the zone all day.

Think carefully about what you looking for beforehand, and take a trip to the city in order to check it out first. Try to secure accommodation near the centre, and make sure you ask around a few estate agents and locals before securing accommodation. In general, I think ex-pats should aim to live inside the line of the 4/6 tram line on the Pest side. The first and second districts on the Buda side are very nice too, but getting around isn’t so easy from there. As in any country, some locals will try and overcharge a foreign renter, so be aware. And finally, whatever you do, don’t give money to the gypsy beggars or buy a mobile phone from one of them on the street.

My plan is to finish my book, and to keep developing my work. I also plan to carry on enjoying and learning about new cultures. There is a big world out there, and life is not a dress rehearsal. I know those statements sound like clichés, but I’m actually doing these things, while others put them up as wishful memes on facebook. Life’s too short not to take a chance on living in new countries and meeting new people, and I am really enjoying the experiences I am having. I strongly recommend others to try it if you get the chance.