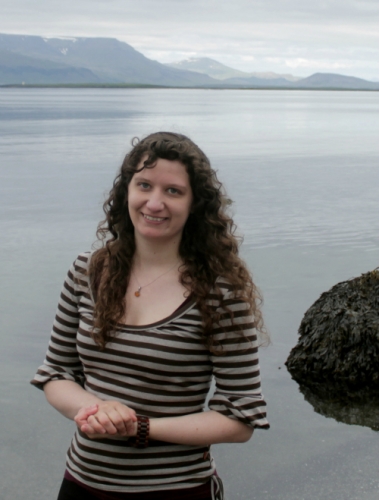 My name is Mariska, I’m 27 years old and I operate my own book editing
company. I work for different publishing houses in the Netherlands and
Belgium. I love reading, photography, swimming, board games, music
and carrot cake.Where, when and why did you move abroad?

I moved to Reykjavik, Iceland in December 2013. I’d always had a
fascination for Iceland. This fascination started when I was fourteen and
began with listening to Icelandic music.

In 2009 I travelled to Iceland for the first time. I hitchhiked around the country for three weeks in summer. The people were friendly and the landscape made a huge impression on me. That’s why I decided I wanted to go back.

I wanted to know what Icelandic winter was like, so I went back in the winter of 2011. This time I also hitchhiked a lot, which was more challenging because of the extreme wind and the snow. I got to see the Northern lights, but more importantly, I learned that this was a country I could live in if I ever wanted to. I had to finish my studies first though, so the plan of moving to Iceland was put on the shelf.

I graduated in 2013 and immediately started my own book editing company. My own company offered me the freedom to work from basically anywhere. This made me realize I could actually take the big step and I began to make more detailed plans for moving.

Leaving friends and family behind is of course difficult. Another challenge for me was explaining to everyone why I wanted to move to Iceland, of all places. People see Iceland as this isolated rock in the North Atlantic Ocean with horrid weather. I’d been interested in Iceland for more than ten years when I decided I wanted to live here, but I found it difficult to explain why Iceland is so appealing to me.

Yes, Reykjavik is the only bigger city in Iceland so most of the expats in the country live here. There are lots of activities and events for expats.

I love the fact that it’s easy to go out into nature – this is something I missed in the Netherlands. Every time I go out of Reykjavik and see the impressive landscape I have the feeling that I’m never going to leave this country. Icelandic nature gives me a feeling of joy. I also like that I’m surrounded by an awesome group of people.

I’m not 100% sure about staying in Iceland, and because of this I don’t fully commit to my life here. Everything is still based on the idea that I could move back to the Netherlands at some point. Sometimes I feel like I have one foot in Iceland and one foot in the Netherlands.

Let me start with saying that Icelandic culture isn’t that much different from other Western countries. I will name two cultural differences though, one in favor of Iceland and one in favor of the Netherlands.

1) I love the swimming culture in Iceland. The swimming pools here are the best I’ve been to, and they are cheap. Swimming is deeply imbedded in Icelandic culture because there has always been an abundance of geothermal water.

2) I’m a big fan of the cycling culture in the Netherlands. Since I just got a bike, I notice how few bicycle paths there are in Iceland in comparison to the Netherlands. The Icelandic government is definitely putting energy in building more bike paths though.

It’s important to meet people when you’re an expat. When I just moved here I tried a lot of new things to get to know people: a language course, board game evenings, a knitting club, a cooking club, couchsurfing meetings, and volunteering at an organization I was interested in. This has helped me a lot with feeling at ease in my new city.

The future is still quite uncertain, but I like living in Iceland for now. I’m looking for a more stable job at the moment. If I find this I think I would feel more rooted here.

Mariska shares more information about life in Iceland on her blog, Wollegras.