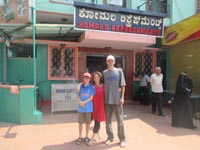 We are a family of three – Deborah, Jon and Myles (11) – originally from Toronto, Canada but our home is in London, UK.

We moved to Bangalore, India in September 2013. The timing and location were ideal for us. Deborah had been director of a campaigning charity in London and was looking for more opportunities to build something ‘on the ground’ rather than fighting politicians. Jon had recently received an MA in Creative Writing and was craving time to write on a full-time basis. Myles was old enough to appreciate living abroad and young enough to move without too many home ties.We chose Bangalore (after many other considerations) because it offered Deborah the most opportunities and was affordable enough to allow Jon to write. Also, we have a very good friend here who made our transition much smoother than it would otherwise have been.

Occasionally we meet another expat in our neighbourhood but most of the expats live on the other side of town in a series of gated communities and shopping malls. We chose to live closer to central Bangalore – and close to our friend – because our agenda included experiencing the local lifestyle. Otherwise it seemed like a pointless exercise coming here.

We chose to come, we weren’t seconded here by an employer.

Nearly all of our new friends here are Indian. The local shop owners know us, our neighbours know us, many of the local auto-rickshaw drivers know us. Nobody has made us feel unwelcome.

To describe the cultural differences between India and the UK would require an entire book. There is no short answer. India changes people. It teaches us that there is no one way to do things but that people can be happy and fruitful anywhere. It teaches us about ingenuity, about patience, personal space, humour, humility, respect, just to name a few things. Indians love their music and art and literature; they love their families and friends. But the way they express these feelings is deep and complex. We’ve been here for six months and have barely scratched the surface in learning about the fascinating and inspiring culture.

Hate to say it, but perhaps the most enjoyable thing about Bangalore is the weather. High up in the middle of the Deccan plateau, the humidity is low and the temperatures relatively steady by Indian standards. While much of India swelters in summer temperatures exceeding 40 degrees Celsius plus humidity, Bangalore tops out at a dry 39. Over the winter it’s a consistent 24 to 26. It’s fun to see Indians bundle up with scarves and ear-muffs when it drops below 20.

Whatever you might have tasted in an Indian restaurant where you come from, anything you know to be ‘curry’, just forget it. The food here is as complex and delicious as the people. Region to region the flavours, spices and ingredients change. We generally eat Indian food at least five or six days a week. We thought we’d be sick of it by now but we’re not. South Indian flavours are especially deep, not overly spicy and very broad. Most rewarding is that ingredients are generally sourced locally, fresh and in season.

We plan to stay here for two years before heading back to London. By then Deborah expects to be ready to return to the British NGO sector and, with any luck, Jon’s writing career will be running under its own momentum. Our one-year visa must be renewed first, a task which could fluster even the most even-tempered people. Indian bureaucracy is notoriously trying.

Deborah, Jon and Myles share more information about life in India through their blog, our daily chapati.