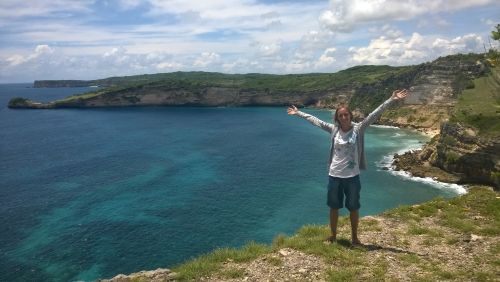 I’m Viktorija (aka Ria in Indonesia), originally from Lithuania’s capital city Vilnius. For more than 7 years I was working as an advertising project manager in the biggest Lithuanian companies. And now enjoying life in Indonesia: discovering, exploring, traveling and writing a blog about life in Indonesia.

Last year (2014) I was selected for Darmasiswa scholarship in Indonesia and because of it, I moved here.For one year I was studying traditional Indonesian dance in ISI Yogyakarta university. At the moment I still live in Yogyakarta city (Java island) and willing to stay here longer.

Indonesia is the first Asian country that I visited in my life. So the biggest challenges were to adapt to Indonesian people’s lifestyle, the way they think and do things, their daily life. As well food, baths in cold water, using squat toilets, traffic “rules” and more small daily things :).

As far as I know, in Yogyakarta now there are no more Lithuanian expats, only me. Expats from other countries – yeah, I could say quite a lot. They have their community in a Facebook group, organising meetings etc.

First of all weather :). Even if the rainy season last year was longer than usual, still there are days with sun, green surroundings – it inspires a good mood. Of course nature: beaches, waterfalls, volcanoes etc., colorful culture.

In general life in Indonesia, for me looks much easier than in my country, you see more relaxed people and life goes slower here.

And Yogyakarta is like the cultural center in Java island – many interesting events organized and most of them you can enter for free.

I don’t like that Indonesians mainly try to earn money from foreigners and give much higher prices than for locals, even if you already started to negotiate the prices in Indonesian language. As well to see rubbish everywhere – you see trash cans, but still Indonesians will throw it where they stand rather than go a couple of meters to the trash can.

Other things are not so important, it’s easy to adapt. If you are an expat – it means everything satisfies you where you are. If not – then you move to another place, unless you have job or study contracts and can’t move so easily. But after contracts finish, you still can change the place of living to another country or go home :).

Mostly it was people’s behavior. For example – curiosity. Indonesians are very curious people. In the first meeting they can ask very personal questions. They do not mean to be impolite or disrespect your privacy with asking these questions, this is the way they try to be friendly with strangers.

Coughing and sneezing: it is not common for traditional and less educated people in Indonesia to carry handkerchiefs or tissues, and often they do not understand how diseases are spread. Therefore it is not unusual to see people coughing or sneezing openly without attempting to cover their mouth or nose.

Staring: in Indonesia, it is not considered impolite to stare. Sometimes when you are out in public, you will feel yourself the object of staring. Adults will point you out to their children; people will stop what they are doing to watch you, etc.! The fewer foreigners in the area, the more stares you are apt to receive.

And some Indonesian habits: eating with hands and mostly cold food, sitting mostly on the floor :).

People moving to Indonesia should come with open eyes and heart. If they haven’t been in any Asian country before, here they can have some culture shock. But the main thing, don’t judge people or their lifestyle, behavior, manners. They’ve lived like this all their life, it’s their culture. You should accept it and respect it. It doesn’t matter how long people will stay here, still they will be just “guests” so they should follow the rules and behavior respectively. Be nice and polite to Indonesians and you will see how friendly, honest and open they are.

I would like to stay in Indonesia much longer, to share the living experience in my blog. As well I would like to find a job in Indonesia. But it’s not easy for foreigners right now because of the strict rules. So I just need to find the way to “survive” in Indonesia, if I will manage to do that – I will stay here as long as I can.

Ria writes about her experiences in Indonesia on her blog, Life In Big Tent.