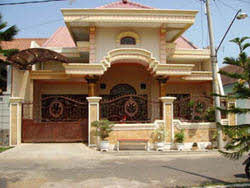 My name is Sheldon Archer. In 2003 I was 69 years old, living in Sheffield and rather bored with life. No financial problems and a nice family but I guess that there was no real love in my life (sure, I had a few lady friends!) My only daughter from a previous relationship was living in the USA and we didn’t get to meet up very often. I really thought that my relationship days were over and I was destined to fade away and die shortly. Very depressing. Lucky I’m not a drinker.

I spent a lot of time on the Internet surfing around and happened to run into an Indonesian guy from Probolinggo, and we became friends. Had to get the atlas out to find out where Indonesia was; talk about ignorant. He kept on inviting me to visit him. I considered the trip, about 36 hours with a stop over in Dubai to Jakarta, and then a flight to Surabaya where he said that he would meet me.At the time I did not have any intention of living here in Indonesia but I did decide to come and visit my friend Ali, for a couple of weeks. Once I got here, I did decide that this is where I wanted to be.

Had to quickly sell up all my stuff in the UK including my BMW… Boo Hoo! Didn’t speak one solitary word of Indonesian, knew only one person and was a very long way from any of my family and friends.

I was staying with Ali in Pajarakaan and as we were driving around one day we passed a housing project where they were constructing several very small houses. I asked Ali how much they sold for and he went into the office to ask. “Sixty five million,” he told me. I worked that out to be about 4,500 pounds. “Is that the rent?’ I inquired. “No, he said, that’s the total cost.” I couldn’t believe it. That would about get me a garden shed in Sheffield. I gave Ali five million that I was carrying. “Go and leave that as a deposit and I’ll get the rest tomorrow,” I told him.

Two months later the house was built and finished. I was in the UK at the time; Ali bought the basic essential furniture for me so that it was liveable when I returned. After I married my wife Yuyun, we lived there for five years. We are now in the process of building a large house in Probolinggo. We have spent about 150 million so far and expect the final cost to be about 250 million. I estimate that the same house in Sheffield would be about ten times that amount.

In Probolinggo the property is very cheap compared to most other cities. I find it is much better to have a house built to your own specifications than purchase an existing one. Especially if you are an expat as the basic designs here are very different to what you are used to.

Ha! To the best of my knowledge there are only about two 🙂

Great! We are well known here now. Anyone who wants to find us only has to ask “Where does the Bule live?” in a twenty kilometre area. It is different in a small town like this. We know most of the local police and officials. I volunteer to help with the English at several local schools and I am treated like a celebrity. I just love the kids here. They come from all over and visit us. I love not having to lock and bar the doors and look through a little peep hole, living in fear!

The freedom, nobody bothers me. They talk about freedom in the USA and UK but it’s a myth. Here there are no bloody speed cameras, enforced speeding or parking; dog, TV or fishing licences; building permits etc

Nothing much really. The only thing I don’t like here is the vehicle pollution, especially the big diesels.

Stay here forever with my Indonesian wife and become a resident. Yuyun started a web page arranging marriages between Westerners and local girls so others can find the happiness that we have.