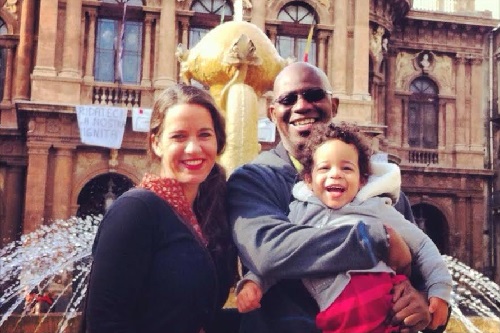 My name is Bethany, and I am an elementary educator and reading specialist. I started teaching in California, USA before I moved overseas to teach at international schools.I have now lived in 5 different countries and traveled to over 50 countries. My goal through my job as an educator is to encourage family literacy that is multicultural and culturally responsive.

I first moved overseas from California to Ashgabat, Turkmenistan as an international school educator. While teaching in Turkmenistan (Central Asia), I met my (now) husband who works for the US Embassy. For 8 years, we have been traveling around the world together doing what we love most professionally and personally.

We have lived in Turkmenistan, Egypt, Ukraine, Latvia, and most recently in Mauritania (West Africa). We just moved back to the U.S. in June 2016, and currently live in the DC area (a 2-year assignment).

What challenges did you face when moving or living abroad?

My first-born daughter was born in Cairo, Egypt in 2011 just three weeks before the Egyptian Revolution. I stand by my choice to have our daughter overseas instead of returning to the United States as so many other expats do. However, it came at a great cost emotionally to have to experience that trauma of a civil war with an infant while I was still recovering from my C-section.

Another difficult discovery was how our interracial relationship and biracial child was an issue. We faced many difficult situations due to intolerance and even hatred towards people of color. My husband (African-American) is an adult and more able to ignore the comments and mistreatment, although it does not mean it doesn’t affect him.

However, watching my daughter experience racism in an international school environment was extremely difficult to watch. Even in pre-school, children are repeating what they hear from their parents. This sad discovery showed me how crucial it is for me to educate young children as well as parents in my classroom on race, religion, and culture, etc.

What do you like about life as an expat?

Thanks to my job, I get to travel extensively. With a teaching salary in America, I could never afford to travel so I am taking full advantage of the wonderful opportunity while I can. In our travels, we have met many famous people in hotels, festivals, etc. However, the best story of a run-in with a celebrity is both wildly hilarious, and totally embarrassing.

In March, 2015 (my daughter had just turned 5) we were on holiday in Sydney, Australia. We get in the elevator in our hotel where a man in a hat and his wife are inside.

My daughter (H): (skipped inside) Hello!!
(The man turns around and my husband and I try not to freak out when we recognize it is Rod Stewart)
H: Watch, I can snap!
Rod Stewart: Wow, amazing! Can you whistle like this? (Demonstrates)
H: No, I can’t whistle, but I can sing! (Starts freestyling a song she knows and then with her hip jutted out with all the sass in the world.) Can you sing???
Rod Stewart: Not like you, that was fantastic!
H: I know, right!!

My husband and I immediately dropped our jaws that our little one had just asked an internationally famous singer if he could sing as well as she could.

Another huge benefit of traveling around the world as an expat teacher is the ability to learn many languages. The languages we have learned as a family in the last 9 years: Turkmen, Arabic, Spanish, American Sign Language (ASL), Latvian, Ukrainian, French, and Wolof. A big disadvantage is that we cannot possibly expect to practise all of these languages when we are constantly moving. We have “lost” languages due to lack of practice, but they are not gone forever. Any of those languages, we can pick up again.

Our language goals for our family are to learn 5 languages. For our girls, there are still many variables up in the air as to which languages they will learn before graduating high school due to relocating often. We have met many expat families where this is their reality as well. In the current parenting era where everything is planned out 18 years in advance, we are well aware that our global perspective and language learning goals are far from traditional.

As an interracial couple with a biracial child; my husband and I were confronted by an onslaught of issues that we had never navigated before. We also were living in post-Soviet countries for years where the majority of the population was of European descent. Many people we encountered had only seen an African-American on television, never in real life.

We have received many questions, both out of curiosity and racial ignorance. Too many times I have been asked if my daughter was adopted. Too many times I have witnessed my husband treated poorly due to the color of his skin, then they fall all over themselves in shock and horror when they find out he is a United States Diplomat. Too many international school students have said cruel things to my pre-school daughter about her curly hair. The injustice and prejudice we have seen has come from Americans as well. It is not just locals. The small expat circles just magnify the systemic problems of underlying racism and inequality that are present everywhere.

Living abroad has allowed me to see the extreme differences between socioeconomic classes. Every one viewed the international schools as a superior education because the public education systems, like many areas in the United States, were not adequate. The disparity of the level of education a child received in private vs. public schools, or public schools in certain areas was even larger than what I experienced in teaching in “inner-city” schools in California.

There were no grants for schools with low test scores or poor communities. In the States, there are food programs, library programs, etc. What I witnessed as an international school teacher made me feel hyper-aware of how incredibly lucky I am to be an educated, White female.

Having this knowledge is empowering because it allows me to be a leader for change when it comes to the disparities in education. I am an activist, more so than ever, to fight for basic human rights for the people of color around the world who may not have access to a fair and equal education.

Use your position for good. Change the world one person at a time by spreading the message of peace and unity around the world. Tolerance for other cultures, religions, and languages is desperately needed. We need to shout from the mountaintops on how to build each other up. Living each day like it’s your last is the message I want to send to those who are dreaming of traveling the world.

I would encourage everyone reading to do less talking and listen more. Listen to the stories of the people you meet with your heart; give things a chance… when you feel yourself crawling back into your comfort zone, have someone in your life who is willing to call you out on your privilege.

We are here in Washington D.C. for another year before we hope to move abroad again. I started writing diverse children’s books with strong and intelligent girls as the main characters, as well as a course for parents/caregivers to teach their children to read as I saw so many expats having to struggle to find a school or program that suited their needs with very young children.

As I move, I hope to share these books and many more to come with families who share our experiences and through education, make a positive change in the world as well as model to my two girls (we recently had another baby girl) that they can do and be anything they put their minds to.

Moving a lot means that education can take a hit; so, I want to arm and equip parents and caregivers with strategies so that they can use books and the world around them to see their children soar into a love of reading from birth.

You can find out more about Bethany and receive a free eBook of The Importance of Reading Aloud: A Parent’s Guide on her website, Biracial Bookworms. You can also keep up to date with Bethany's adventures on Pinterest, Instagram, Facebook and Twitter.