My name is Elizabeth Earle, I am an artist and author from England.

I first officially left England in November.I was incredibly tired of not knowing in which direction my life was going, unhappy with the 9-5pm lifestyle and wondering if my life really was destined to be in an office for the rest of my life. The idea of my life’s pursuit to get a huge mortgage for a house in an area I didn’t like with a car I couldn’t afford didn’t appeal to me. I wanted adventure, I wanted a story. But I didn’t know where to start.

Inspired by a sailing channel called SV Delos, I quit my job and within three weeks moved to Australia to live with my parents. I stayed there for five months, trying to figure out what life I was looking for, working as a volunteer editor for a cultural magazine in Perth until life felt pretty much the same as it had in England.

On a night out, I contacted SV Delos’s facebook page. After leaving them a tipsy message, I didn’t expect a reply. They have thousands upon thousands of fans and I was just a typical girl from England. But they replied. And then sparked off a two month stretch of contact until they finally said: “Hey, do you want to go sailing?”

I was afraid to. I mean, it had been my dream to sail with these guys but I was just scrambling to get my life in control. Could I throw it all away now? I mean, I still wasn’t earning any money doing volunteer placements, I was thousands of miles away from my friends, but everyone seemed to think I was “doing the right thing” that I was “in the right place.”

So that was it. 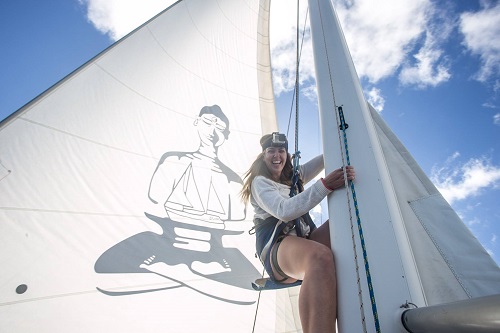 I took a terrifying leap of going against everyone’s thoughts, wishes and expectations and bought a one way ticket to Africa.

The story I have created for myself. Two months spent in Cape Town living on a boat with five other people was an incredible experience. There were three Americans, one Swedish girl, and a girl from Austria. SV Delos are the leading sailing channel on YouTube and they travel and film of their adventures.

I quickly became the boat’s writer, occasionally picking up a camera when I could. We left in April, heading towards Luderitz. We explored the deserted diamond town that had been swallowed by the desert at dawn, joined the crayfish festival and danced with the locals before sailing off to Namibia. On the way we explored the Skeleton Coast of West Africa, finding an island inhabited only by penguins and one man, we found a seal colony defending a huge 1940’s beached shipwreck and woke up every morning to dolphins swimming against our bow.

We then arrived in Walvis Bay in Nambia, where we made great friends and went camping off in the African desert, sighting zebras, giraffes, jackals and antelopes. We danced along the dunes, bright paint on our faces, and danced beneath the stars drinking rum and cider.

We then sailed to St Helena, a tiny island owned by the English Government. We explored the land, finding the place where Napoleon was exiled to. We hiked, visited the house he died in and drank plenty of rum with the locals!

It then only made sense to sail to Ascension Island, a place where we heard there was a serious shark problem. A few weeks previous, a woman had been attacked by a hungry Galapagos shark. They were unnaturally aggressive and no one knew why. Getting to the docks in our dingy was always a scary prospect in case any of us fell in! A barren land, it was there where Charles Darwin suggested to his assistant Mr Hooker to plant new species of plant on the mountain, thus creating a huge and completely man made rainforest (which is also a terrible idea to hike when hungover).

Ascension Island was also the place where I fell in love with a French sailor. Spending the entire day on the beach, we saved a nest of baby turtles that hatched during sunset from hungry frigates, running to and from the shore as fast as we could. We spent the rest of the night under the stars with a bottle of rum in hand. We agreed that we would meet one day together in the future.

Five days after meeting Edouard the French sailor, he sailed off with his crew to Cape Verde. I sailed off with my crew towards Brazil, a seventeen-day sail, not knowing whether he would want to see me again. 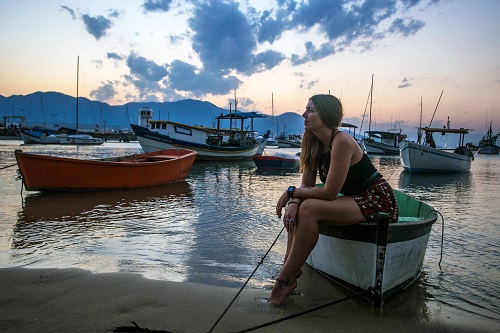 Finally landing in port and getting internet, came the message from him asking me to come to France. So I booked a ticket, spent a month with my crew partying, exploring and writing until I flew to Paris to meet him.

Still completely in love, we spent the next two weeks catching up the past two months we had spent apart, deciding after two weeks we were going to move together to the South of France. Two and a half months later, we have been living in a beautiful apartment in Marseille.

It’s been difficult moving to France as I didn’t speak any French at all. I learned quickly with Edouard’s friends and family and try to learn a little bit each day. From going from country to country, I am used to not being in my comfort zone- in fact- not being there has become my comfort zone. I’m used to small places and sharing my space with a close knit group of people, so I’m good with challenges. The only thing I’ve been finding difficult is living in a city again after living so remotely for six months. I’ve been living amongst paradise, white beaches and beautiful sunsets each day, so waking up and being surrounded by people trying to get to work, noisy cars, polluted streets and material possessions like mobile phones or the latest brand of highlighter makeup is hard for me to understand.

I haven’t met any English people as of yet in Marseille, but would like to. There are plenty of people here that speak English, but after being away from England for so long, it would be nice after a year to get a taste of home. I’ve been so inspired by listening to other people’s stories who have left their countries to live on tiny islands that I know that the opportunity is out there. Many people say “I wish” a lot, but they don’t know how easy it is to change their environment and just be where they want to be. And if they don’t know where that is, then that’s what travel is for.

The only thing I dislike about my life now is that I don’t speak fluent French and my friends and sister don’t live with me. But at the same time, I’m very grateful for living only a few hours away from them. When I lived in Australia it was a 28 hour flight. And when I was sailing? Forget it.

The main differences I’ve found between France and England is that here people are a lot more old fashioned- in a good way. There’s a deeper sense of society and community- everyone constantly wants to play games. During the weekend around someone’s house, everyone will want to play a game of cards or something like that. In England, we’re very much straight to the point- if we’re playing a game, it’s usually “Who can get John drunk enough so he stays out for the night?” 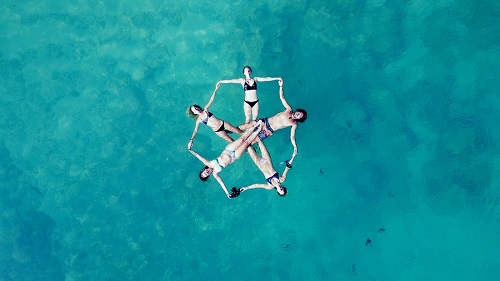 I used to eat extremely healthily in England and Australia. Whilst sailing, it’s difficult to move that much and when I arrived in France, I discovered that they pretty much have the best of everything. The best wine, the cheese and don’t even get me started on the bread. As a sailor, it’s almost an impossibility to give up rum, so I’m still trying to find the balance of a healthy lifestyle. I wouldn’t say there is anything I dislike about where I am right now.

The advice I would give to anyone following my footsteps would be to just go for it. Don’t listen to any negativity from other people and to take the leap. Travel is one of the greatest gifts you can give to yourself and your children (if you have any). Be the author of your own story. Create something extraordinary.

My plans right now are to carry on with my journey and not to plan anything. To take life as it comes. The new season of SV Delos with our adventure is now live, so I am painting and writing like crazy. I am the writer of The Delos Diaries and now The Delos Story so we shall be doing a book tour in America when it gets released. The world is a wonderful place and life is far too short. There’s always another adventure on the horizon for us to take the leap.

You can keep up to date with Elizabeth's adventures on her website.

Would you like to share your experience of expat life with other readers? Answer the questions here to be featured in an interview!