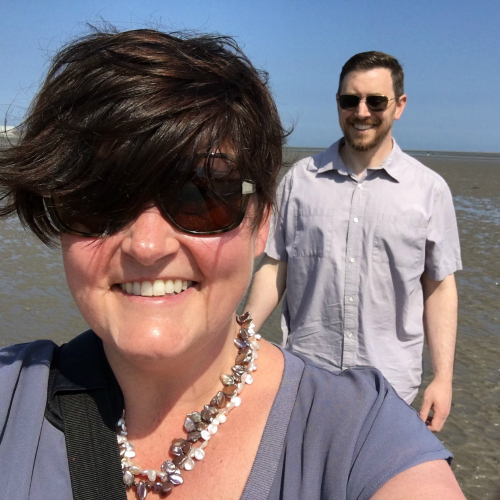 My name is Becky, and I’m a 39-year-old expat living in Dublin, Ireland, with my husband.

My background is in technology public relations, but for the past year and a half I’ve been a full-time author, writing contemporary and paranormal romance novels. My husband is a software architect with a global technology company.Where, when and why did you move abroad?

We moved to Dublin in October 2015 when my husband was transferred over here for work.

Our biggest challenge was just getting here. We had a number of delays and issues with our visa, largely related to the fact that the office processing our paperwork in Dublin basically took the entire month of August off.

Once we finally arrived, we realized the real estate market was incredibly competitive and a lot of the houses we’d seen for rent even a week prior were no longer available. We were worried we were going to have to live out in the suburbs, but thankfully one of the houses we’d asked our relocation agent about hadn’t been rented yet and we were able to see it on our second day here. Another couple had already told the letting agent they wanted it but were too slow with putting together their paperwork so when we found out it was still available we acted quick. We were used to that environment coming from the Bay Area so it didn’t seem odd to us to arrive with our security deposit in-hand, ready to sign the paperwork. When we found out two days later the place was ours, it was a huge weight off our shoulders because we really wanted to be close to the city center. Unfortunately, we moved in with nothing but clothes so we had to go out and buy kitchen supplies in order to actually live. For five weeks we cooked with one pan, one spatula, and one spoon. Our meals were creative, to say the least. When our stuff arrived a few months later, we were reminded that none of our electronics or small kitchen appliances actually work ed here because of different voltages, so we ended up spending a lot of money basically re-buying items we already owned.

There are but aside from a few I interact with online, I don’t know many of them. I thought about going to some expat meetups, but I’m an introvert and the idea of willfully walking into a room filled with people I don’t know gives me the hives. Plus, many of them are much younger than I am – straight out of college and just starting out – or have a few children so I don’t actually have much in common with them to begin with. We have been fortunate that my husband’s colleagues here are amazing so we’ve enjoyed spending time with them. Early on, we also met his co-worker’s brother who lives here and is engaged to an Irish woman. We’ve become friends with them, so that’s been lovely.

I really, really, really love Dublin. It’s such a vibrant city with so many places to go and things to do. Back in the Bay Area, we were homebodies, but we’ve really made an effort to do as much as we can during the two or three years we are here. One of the things we were worried about, coming from a place like Oakland where the cuisine is actually world-class, was how we’d adjust to the food scene here. We shouldn’t have been concerned though because Dublin has a thriving food scene and the quality of meat you can get in the grocery store is well above what is available in the supermarkets of the U.S. I do miss heirloom tomatoes though.

Honestly? The only thing I dislike about the experience is the thought of it coming to an end. We’ve been back to the Bay Area a handful of times already so we’ve been able to see our friends and my husband’s family more than we thought we would. My family is in Montana and Ohio and we only saw them once or twice a year anyhow, so it’s not like being in another country has affected those relationships. The only thing that has really changed is figuring out what’s an appropriate time to call, text, or FaceTime with my sister. There’ve been lots of middle of the night messages on both our ends.

One of the biggest shocks has been dealing with the number of people who smoke here! There are cigarettes everywhere and you absolutely cannot get away from them. In the Bay Area, very few people smoke and those that do are practically social pariahs. Here, smoking is practically a way of life. It kind of reminds me of how it was when I was living in Pittsburgh in the mid-to-late 1990s, but even more extreme.

Understand that the first six months is an adjustment period. If your experience is anything like ours, it’ll take you about that long to get settled. Try not to obsess too much about all the things that are going wrong and instead focus on everything that is going well.

We have a little over a year left on our assignment and we’re hoping to be able to extend it for a year after that. If we can’t, we’ll likely move back to the Bay Area. Instead of settling back down in Oakland though, it’d be great if we could explore the North Bay area around Mill Valley or Sausalito. I think it’s good to switch things up every once in awhile.

You can keep up to date with Becky's adventures in Dublin on her blog, Casa Caudill.