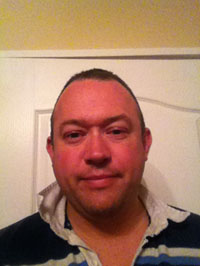 My name is Matt Bisp, and I’m a thirty nine year old male originally from Bristol in the south west of England. I am married to a beautiful Irish girl and have three perfect (most of the time) children, one aged seven, one aged five and the youngest aged two – all of them born in here in Ireland but I frequently remind them of their English stock! I work for one of the large Irish retail banks and I am a qualified accountant, and have been for over ten years.

I moved from Bristol to Dublin in July 2004 with my wife of 8 months at the time. We moved for a variety of reasons but mostly because we had married in November 2003 and our minds were drifting towards starting a family.My wife is from a large family (as most people in Ireland are) and this gave us two large impetuses to move to Ireland. Firstly my wife had moved from Ireland to Bristol in 2001 and she had become increasingly homesick as her siblings started to have children, secondly we felt that we would have a better support network in Dublin when we started a family due to the size and closeness of my wife’s family.

There was the obvious challenge of leaving my family and friends. I’m from a regulation English family – two kids – so although I didn’t have many family members to say good bye to, it made all the harder for me and my parents. Then there was the issue of jobs for both me and my wife. Despite me already working for a company in Bristol owned by an Irish bank, my wife found employment before me! I had a number of interviews and trips over to Dublin before I eventually got lucky with a transfer opportunity within the bank. Getting our stuff over was also a challenge, a friend of my parents owned a van and offered to drive over with our belongings (for a price of course) but space was limited and we ended up leaving a lot of stuff behind that we would have liked to have kept.

Initially we moved in with my wife’s parents house and shared with them and my youngest sister in law. Although this was a novelty for me at first (we all got on great and would go out drinking together frequently) my wife maybe struggled with it a bit more as she had already outgrown the family home. It was obviously far from ideal for a relatively newly married couple, but it was a means to an end and we were grateful for the roof over our head. Within 4 months we had placed a deposit down for a new build two bed house, though we had to wait a further 6 months for it to be built. The property boom was in full flow back in 2005 and we vastly overpaid for the house that we bought.

Amazingly our next door neighbors are carbon copies of us, and Irish woman and an English fella. Next door to them is an English couple. So although not typical, our own cul de sac has plenty of English ex pats. We are close to our next door neighbors but don’t believe that this is purely because of our similarities in nationality. There are also a number of fellow Englishman in my work and although we do not exclusively stay together, we are quite close. We share a love of football teams that are in the lower divisions of the English league and this gave us an instant talking point.

Our relationship with our neighbors is sound and there is no issue with the fact that I am English – though historically we would not be a popular race here due to the Troubles in the north. We are involved, through our children, with many local activity groups, including karate, football, hip hop and ballet. I would be also on speaking terms with local retailers as we have been in our house since the estate was initially built so have been using the same shops & restaurants for 9 years now. We also get involved with some of the activities through the school and this increases our “footprint” in the area.

One of the main things I like about life in Ireland are the people. Irish people are naturally very friendly and welcoming, and whilst in England we can tend to be a little aloof and stand offish, the Irish have an instant rapport about them that make settling in very easy. We also live very close to the sea and to a gorgeous sandy beach and it is a blessing to be able to drive for ten minutes and be by the water. There are also a number of great parks and playgrounds nearby as Ireland is very family orientated and this is of huge benefit with our three kids.

The obvious thing is that I miss my friends and family from home, this has not gotten any easier over the years – though I do not regret moving. There are a number of things that also impact our standard of living here in Ireland and they include medical expenses and property prices. As mentioned earlier we paid a vastly inflated price for our small house and we will be saddled with the negative equity for some time to come. I also suffer from psoriasis and am currently prescribed with systemic treatments which means I need prescriptions every month. In the UK these would have been capped at around £7, here in Dublin they are €144. We also have to pay €70 to see a doctor as opposed to being free in the UK and with three kids this can be a big drain on the finances.

Overriding advice I would give would be – do it, give it a try at least. Ireland is a very hospitable country, and despite the fact that Britain can be a very unpopular country on these shores I have still been made to feel very comfortable. Despite the recession and the well famed measures to fix this, there are still a number of opportunities here in Ireland and it is a beautiful place to live with many unspoiled areas, particularly in the rugged west of the country. Do your research before you move over, like any city there are some places in Dublin that you wouldn’t recommend. Also make sure you look at the cost of housing / living etc. before accepting a job as Dublin is still a quite expensive place to live.

Keep slaving away at the Bank, and we hope to move to a bigger house within the next few years. Would also be our aim to get a house nearer the sea. I definitely see our future in Ireland, after almost 10 years here we are very settled, our kids are in good schools and as I said earlier, Ireland is a beautiful country and is very welcoming. Even in my short time here in the country I’ve seen huge changes in the make-up of the country with a huge increase in “non-nationals” living here, but rather than diluting the spirit here I feel that it have galvanized it as immigrants adapt rather than expecting the country to adapt to them.