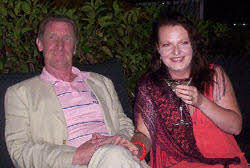 We are Carol & Tony Evans, both British and come from Hull in northern England and we have been married for 28 years. We have two Chinese Chow Chows. Tony has a son to his first marriage that lives in France with his partner and two children. Before leaving England, Carol was a doctor’s receptionist and Tony worked for a City Leaning Centre as a receptionist/administrator and evening IT tutor.

Since the early 1980’s we had always wanted to move and live abroad. At that time, we chose northern France as a destination but due to a dramatic change in the interest rates, we decided to leave it for a year or so. However, it was 20 odd years before we finally made the move to leave England.In 2004 my father, then aged 86, was given the chance to revisit where he was stationed during the Second World War via the National Lottery Heroes Return scheme. This was Pozzuoli in Italy. As my mother had died we got the chance to accompany him as his carers. This was our first trip to Italy. We had always asked ourselves the question “Could we live here?” when we went abroad on holiday, but for some reason we didn’t ask ourselves this question this time. It wasn’t until we returned home that we did so. Our answer was maybe, so we booked a two-week holiday for the next year in the same hotel. During that stay, we decided that this was the place. After waiting almost 7 months for our house to sell we finally moved in 2006 to Arco Felice.

The main challenge we had was driving here with our two dogs. It took two days travelling via Holland, with a stopover in Switzerland. Another worry was “Where are we going to live?” as we had nowhere and only booked a hotel room for a month in the hope that we would find something during that time.

As we had both given up our jobs in England with the intention of moving to Italy, we were entitled to unemployment benefit which would still be claimable in Italy. While in the office making our claim some 4 days after our arrival, the man behind the desk asked if we had somewhere to live as he had a house to rent. We went to see it and it seemed just right so we took it. However, after 10 months we realised that the house was too small for our needs and we managed to locate one further inland that was much larger and suited to our needs for the same price.

Our intention when we set out to live in Italy was to start a pet sitting/boarding business.

However, the reality of how the Italians treat their animals was disheartening. They love their dogs with their heads not their hearts, and would leave the animal to fend for itself while on holiday. We posted adverts in local pet shops but received no enquiries. Tony had managed to get a teacher cover job at the NATO base but this wasn’t very satisfying as basically he was just babysitting. Then the following January 2007 we got a call from a British Naval officer asking us to look after his pets while he had a month holiday. He told us to advertise on the NATO base. We did and haven’t looked back since. We haven’t advertised for over 16 months now as it is all word-of-mouth via the military community. Although it pays our living expenses, Tony does some private English lessons which will help for our future plans.

The majority of expats are military although there are others.

Once the locals find out that you aren’t American or military and are here because you want to be they are very helpful.

We love what we are doing here with the animals and know that it would be a great struggle back in England. It gives us time to be with each other. Coming from an inner city, we love being able to look out and see the mountains and the sea. Although crime here is bad, we have never felt threatened walking in the street as we did in England.

Rent before you decide to buy.

Hopefully the business will last at least 10 years by which time we will be ready for retirement and our intentions are to move in to the mountains near Avellino, where we will buy a small house.