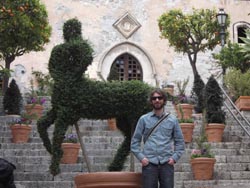 Sicily, for some a paradise island, for others a place to emigrate from, for me it was my new home. I sketch this to give the reader some idea of the cultural differences and challenges that might face an expat on the Mediterranean island of Sicily.

I struck out alone for Catania, Sicily at the end of summer 2011 to broaden my horizons and to search for a new challenge. In my new life abroad I needed to find a place to live, a means of earning a living and an entire new social circle. From whatever point of view you look at this, it is a large undertaking. Importantly though, the challenge is offset by one’s enthusiasm, positivity and hunger for a change.

Within a week of arriving I had discovered a room in a shared house located centrally. The local ad newspaper provided my contact and soon I was ready to look for employment. I found small pieces of work teaching English over the next two months until I eventually found a full time position. From that point on my main issue was getting used to life as an expat in Sicily.The first issue I ran into was the siesta. It is a well-known Spanish custom but it is also observed with great reverence in Italy. If one wishes to buy bread, some food, a bag perhaps, then between 2 pm and 5pm is not the time to do it. The cities close down and become ghost towns where even the roaming cats and dogs take a break and lie in the shade.

A holiday maker searching for a pizza or a bowl of pasta during these hours will be sadly disappointed. Many tourists are seen entering various eateries where they will surely receive neither a glowing welcome nor the freshest food. Yes when in Rome, one must surely do as they do. The best time to eat is between 1 and 2pm and between 9 and 10pm.

A breakfast croissant known as a cornetto will be fresh and piping hot between 7 and 9am. A late riser will be given a hard dry stodge around 11am. The cornettos are filled with everything from marmalade, to Nutella, to sweet ricotta cheese. This should be accompanied by a cappuccino for maximum enjoyment but only before 10am. If someone orders a cappuccino after then, God forbid in the evening, they will be greeted with incredulous faces. “Are you mad?” the eyes seem to ask.

Coffee drank during the daytime must be un caffè, an expresso, drank in two sips and in less than a minute. Italians will emerge from all corners of the city, always in a rush to be served. “Un caffè,” they shout without sweetness, at obedient baristas. The barista will usually ignore this unfriendliness and lavish great courtesy on their clients.
If you have been used to drinking a beer or glass of wine in a bar after work in your home country, you will not do it too often in Sicily. Here drinking is done standing in the street outside bars or if you are lucky, sitting in one of the few tables they put out.

Enormous fuss is put into the service of the drink and one may have to wait 5 minutes to be served or even acknowledged. Often bar staff will stand ignoring their clients while they discuss politics, the weather or their love lives. This is normal and should not be taken personally even if you are clearly waiting for service. In the evening they are never in a rush to take your order.

This myriad of cultural change inspired me to write a blog about my experiences, which I have tried to keep more informative and less personal (link displayed in my profile on right). It was also a useful way for me to understand the experiences I was having.
As regards language, I had learned Italian before moving to Sicily and was lucky enough to be able to communicate well from my first day here. This is hugely important because in Sicily, even more so than in the north of Italy, it is difficult to find anyone who speaks English. There are only a few bar or restaurant staff that can repeat semi mantra type phrases such as ‘Can I help you?’ or ‘Are you ready to order?’ For tourists this is fine, as most proprietors of hotels or bed and breakfasts can speak a little English. One will find it difficult to make friends without the language.

This is also true for work. I began teaching English here and I discovered immediately that most people have a low level of proficiency. This means that you will need to explain things to them in Italian. To explain the difference between the present perfect and the simple past tense can be a challenge in English, doing so in Italian is another matter!

It is possible to teach English even if you cannot speak Italian well or at all, the solution is to only teach people who have already an upper-intermediate or high level of conversational English. This cuts down on how much work is available to you, though.

Your skills in Italian will improve dramatically after a month or two, especially if you stay around Italians and not just English speakers. A Polish girl, who after arriving without one word in September, left in June quite fluent, having made many Italian friends. It is definitely possible.

In conclusion, it is important to remember that when moving abroad you must leave your old life behind and avoid romanticising it. You have a new world to explore abroad, one just as ripe and full of possibility.

John shares more imformation about life in Sicily through his blog John P Brady and on Facebook.