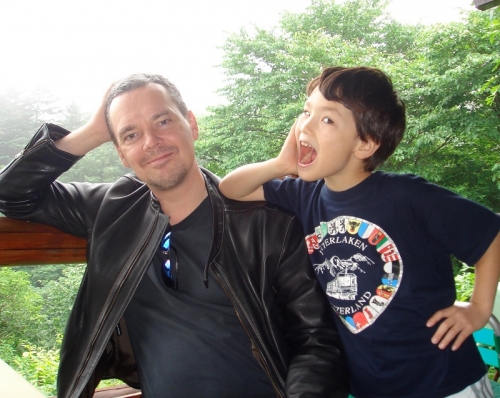 My name is Jonathan, originally from the UK, and live in central Tokyo writing about some of the more curious aspects of Japan in my blog TenguLife.com after being a full-time expat working in Sports, Luxury and Automotive over the years.Where, when and why did you move abroad?

When I was twenty-five and working in London, my company suggested a two year secondment overseas to Japan.

I knew little about life here but had a friend who had spent time on the JET program and he was enthusiastic about the country. Having no ties in the UK, and eager for the adventure, I agreed. Six weeks later I was on the ground. That was the end of 1991 and I have never quite got around to leaving.

When the company suggested I relocate first to Osaka, the reason given was that no one in the office spoke English. This should have been an indicator to me that no one in the office actually spoke English and it came as a shock how limited the English language skills were. Suddenly I could neither speak nor read and write in the daily language of my new home. It would take a while and some good advice that it was better to change myself than try to change the country. After all, the second-language abilities of a significant element of the UK are fairly limited too.

Actual relocation is simple and efficient with many international firms providing a wide array of services including “acclimatisation guidance”. The company is required to sponsor a visa and will also be required to act as guarantor for apartments or houses as well but this should be automatic.

Opening a bank account may take time as all foreign banks have now pulled out of the market, or are in the process of leaving due to competition in the retail market. The international schools provide a pre-arrival entry process though Japanese schools will take non-Japanese speaking children as well providing an alternative option to the usual expat education and it’s not unknown for even executives to take advantage of this to provide their children with the opportunity to be immersed in a second language.

Within the major cities there are many real estate companies that maintain specific departments to support foreigners as they arrive in Japan. However, there are also areas within cities where foreign communities are more established and as a result the local infrastructure is simply more used to a non-Japanese population. Tokyo is a wonderful city for expats however, on a clock-face, the areas from 6.00 to 10.00 and into the centre (roughly Gotanda, around the Yamanote Line to Shinjuku and into Akasaka) are more used to foreigners’ requirements. The east of the city is always fascinating however, unless you speak Japanese, it’s more challenging in daily life. Additionally, the foreign stores, schools, expat clubs etc tend to lie in the western part of the city for historical reasons.

Are there any other expats in your area?

Yes. The new expats tend to live within the loop-line (the Yamanote Line that circles the centre of the city) and Tokyo is a genuinely international metropolis, so where ever you are you will tend to find non-Japanese from a variety of countries. Outside the major cities (Tokyo, Yokohama, Nagoya, Osaka etc) though the expat populations tend to be limited. These areas are a great experience if you’re young and on a JET program for example; the communities will welcome you as one of their own. It’ll be a different experience from a senior expat in the centre of Tokyo, but one no less rewarding.

Well, I married one. Japanese are often hesitant to engage with non-Japanese speaking foreigners but this is really more to do with perceived problems around communication. However they tend to be warm and welcoming one the gap is bridged. If you ask for help, people with go to extraordinary lengths to provide support. A cultural issue though, if you don’t ask for help, it will rarely be provided, people thinking it is more a question of your own issue that you would prefer to maintain as private. As with any country there will always be the occasional instance of difficulties with neighbours but these are genuinely the exception rather than the rule. In reality, I know much more about my local community in Tokyo than I ever did in the small town I grew up in in the English countryside. And always take the opportunity to join the festivals; someone will come up to you and offer you a beer and a smile.

Japan is a fascinating country in which to live. Both lifestyle and business style are different to western countries even before starting with the spoken and written languages. It’s safe for women and children, relatively crime free and boasts world class education, transport and health facilities. But most significantly the Japanese culture is a warm and welcoming one. If you want to become involved there are no barriers beyond language to overcome and there is something new everyday.

What is the major cultural differences between Japan and my home country?

The immediate difference is around communication. Outside Tokyo the level of English is, as mentioned, relatively low and the written language, based around three separate alphabets, can be almost impenetrable to begin with. However, the real difference arises not from simple communication, a translator or bilingual friend can solve that difficulty. The real difference is in the approach to thinking and decision making. A Japanese “yes” can just as easily mean “no” and it takes time to understand this. Japan is a consensus based society where the wishes of a few may override the benefits to the many and recognition of the success of an individual is less important than that of a team. If staying a relatively short period of time, say two to three years, it is arguably more effective to spend a little time learning the ways of Japan than a lot of time learning language of the Japanese.

What are the likes and dislikes of food in Japan?

Japanese cuisine is some of the best in the world. Indeed, Tokyo holds more Michelin stars than does Paris. Sushi, sashimi, shabu shabu and the rest are an amazing experience and everything should be tried at least once, even if not necessarily twice. The only real negative to eating out is that smoking in restaurants remains relatively common, but it is slowly changing over time.

It is possible to have some of the most expensive food on the planet but similarly it is just as possible to have a cheap and cheerful night out in the small bars and izakayas that are found everywhere across the city. You don’t need to spend a fortune to have an excellent evening out.

Advice for the newcomers to Japan

There are three key thoughts to keep in mind if nothing else. First, Japanese people work as a team rather than individuals, that’s why everyone stays late in the office rather than leave when their work is over for example.

Second, Japanese would prefer to be “exactly wrong rather than inexactly right”. Westerners are comfortable with grey, Japanese are comfortable with black and white. However, most importantly, Japan is just different. It’s not right or wrong, it’s just an example that there is always a different way to achieve the same objective. At first, this may be frustrating but over time it becomes a highly rewarding learning experience. It just takes a little time to progress through this phase. I hope you enjoy your time in Japan, it’ll be quite an experience and please feel free to contact me through my blog if you have any questions.

Jonathan not only shares more information about life in Japan through his blog Tengulife.com, he has also written , “The Beginner’s Guide to Japan” for anyone coming to live in Japan, and “The Expat’s Guide to Japan” targeted at people moving specifically to work.