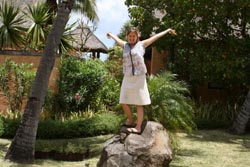 I am a thirty-something stay-at-home mum who has been a kind of expat all her life. It all started when I was 5 and my parents decided to leave Denmark for sunny south of France. That’s where I grew up and thought about a career that could allow me to travel. Eventually I studied and worked a bit in Switzerland, left for Los Angeles and then London, Paris, London again and now because of my husband’s job we are settled in Amman, Jordan.

We moved in January 2010 for 2 years. So far so good, I really enjoy it. We had been on the look out for quite some time for a move from London, but the economic situation was not so good so it took some time. When the position opened in Amman, we got really excited. For us, it was the best country in the Middle East: history, central, not too hot!What challenges did you face during the move?

It was quite easy actually. Got some quotes, chose a company, and off we were. The trouble was on the other end! There are a few rules to get goods into Jordan…

First of all, each box must be labelled with what is inside. Also, take care of censure: I didn’t take many books or DVDs with me. You are allowed 2 electrical goods per person. More than that, it is the time it takes to get the things out from Aqaba or Amman airport.

You need to be there when the boxes are opened (or send someone you can trust!) and might need to pay a few Jordanian Dinars here and there to get everything with you. I think it took us about 7-8 weeks to get our stuff.

My husband’s company got us in touch with some local agencies. We visited quite a few properties before we found something we liked! We are renting as it is part of the package. In Amman, I was told, it is normal to buy something new and move in with new furniture: the owners just leave everything behind for the rental. The kitchens are completely furnished (cutlery, glasses, micro-awe) and if you miss something, most owners will buy it.

We live in Jabal Amman: we have some expats in our area, however it is not the most common area, which would be Abdoun. We decided on the area because it takes my husband 3 minutes to get to work!

I don’t have that much contact with the locals. I find that expats stay more in between themselves. There is of course the language barrier, I have to admit that I have yet to start Arab lessons!

I find Amman an easy city to live in. It is small, quite convenient. it has been very easy to meet people (I think it helps with a baby), and is very international: I have French, Swedish, Australian and Japanese friends, to name a few. Jordan as a country is incredibly exciting: so many things to visit, like Petra, Jerash or the Dead Sea. And of course it is so quick to get to Beirut, Damascus or Jerusalem.

I think the most difficult is that I always have to say goodbye! In a city like Amman, most expats come and go: 1, 2 or 3 years. Friends are leaving and new friends are arriving. It is strange and a bit sad, but of course also exciting.

It is important to think about the political situation in the area: Jordan is a small kingdom, nested in between Israel, Syria, Iraq and Saudi Arabia. But I have to say that I feel as safe here as in London or Paris.

We hope to continue more eastwards. We want to leave the middle east for Thailand, Malaysia or Singapore for example. we will see where we will end up!

Read more about life in Jordan at expatfamilyinamman.blogspot.com